I have always been a big fan of Sundays at Primavera Sound. The first years (for me, I mean) there were concerts at the Parc de la Ciutadella, in a very nice and cool environment where it was possible to see some of the artists I missed at the festival, in more intimate and, sadly, shorter concerts. After this, there were some interesting concerts in the BARTS venue (and in Apolo, of course). But a few years ago, everything changed and the free concerts were moved to the CCCB and the concerts at the BARTS were canceled. The first two years we had a lot of big artists at the CCCB, together with some bands from the Pro line-up and second concerts of artists that played during the weekend at the forum. This year, the Sunday free concert program has been considerably reduced and there were only three acts from the Pro that played really early. They were followed by two Spanish rap/trap artists that were not very interesting, at least for me, so I did not go to the CCCB until 18:20. 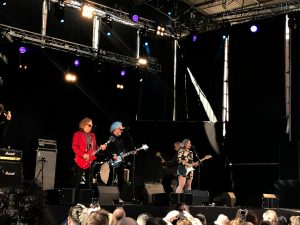 Filthy Friends, my main reason for going to CCCB, is a supergroup with Peter Buck and Corin Tucker together with members of Young Fresh Fellows. On time, they started with “November Man,” followed by “The Arrival” and the band’s first single “Despierta.” The songs from the new album of the band, Emerald Valley (“Pipeline,” “The Elliot,” “Angels,” “Only Lovers Are Broken” or the one that gives the title to the album) were played together with tunes from the first album, such like “Not Forgotten Son,” “Any Kind of Crowd” or “Windmill.” Someone, rightly, told me: for what they are, they could do way better.

We continued with Christina Rosenvinge, whose sound was as bad from outside as from inside the CCCB. The public looked as if they were already waiting for the next act, talking all the time. She played three songs from Lo Nuestro, a record that I really like: “Alguien tendrá la culpa,” “La muy Puta” and “Romeo y los demás.” The rest of the setlist consisted of songs from her new album, Un Hombre Rubio, like “Niña Animal,” “El pretendiente” or “Romance de la Plata.” It was not a bad concert, but we could not understand anything of what Christina Rosenvinge was singing.

I gave a second chance to Cupido, a Spanish band that I saw at the Primavera Club (to be honest only half a song). There were a lot of people, really into the music, but by then. I was really fed up with auto-tune, I think that I had enough on Wednesday for the full festival so I left.

After dinner, I went to Apolo to see The Beths, and it was, without a doubt, the best concert of the day. The band from New Zealand, proved to have a lot of energy and managed to put the venue upside-down. They played almost all the songs from their first album, released last year and called Future Hates Me, with incredible songs like the one that names the album and “Little Death.” We were a bit tired and ill, because the previous night was very cold, so we decided to go back home and miss the concert of Amyl and the Sniffers, who gave a really good concert at the forum according to some friends that saw them.

In a few words: it was not worth it to stay one more night Barcelona. One good concert of The Beths, to see Christina Rosenvinge for the third time and Filthy Friends for the first one was not reason enough for the money and the physical effort that I had to make. A sad way of saying goodbye to a festival that during three days gave me some unforgettable concerts.