There is only one place where people feeling nostalgic about the 80s and Goths gather together, and that’s W-Fest. This year, the festival has placed its particular time machine in the Belgian city of Waregem, so there we traveled, just to go back to a time when the sun always shined on TV. But something went wrong, and instead of arriving at a decade where the president of the USA was a very bad old actor, we appeared in 1969, with some hippy necklaces and round pink glasses. On the stage, Irish Coffee was tuning their instruments. Fuck! I said, and instantly, I thought: If it is Wednesday, this must not be Belgium. And I was right, we were in Woodstock!!!! 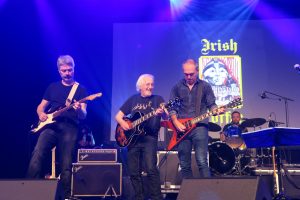 The travel in time had created some anachronisms and I could only recognize the original member William Souffreau. By his side, four more incredible musicians helped him go thru the repertoire of the classic Belgian rock band. They started with “Tobacco Fields” and continued with “Crazy Old Town”, and there was some really good guitar playing. Next, there was the hard rock of “Walking the Dog” and a bit later the classic “The Beginning or the End” that everybody celebrated. We moved our hips during “The Show part 2” and enjoyed the concert. But we had problems with Time again, because it was time that the band had to leave without playing all the planned setlist, that included a version of “Helter Skelter.” After trying hard to return to play an encore, they disappeared. 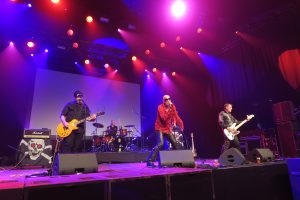 And suddenly, we were in the 80s, with the after punk/goth sound of Twisted Nerve. Craig appeared with one of his classic colorful shirts and started with “Magik of Trance.” They continued with “Medusa” and “Yes Man.” At that moment, I realized what a good band TN are. They have an amazing front man, the coolest bass player, one of the best guitarists that we saw in all the festival and a hell of a drummer. And they also have great songs like “Strange Sensation,” “Seance,” “Twisted Nervosis” which they played with passion. After a powerful “Five Minutes of Fame”, they played a cover of The Stooges’ “Search and Destroy”, which was a perfect ending. Amazing concert. 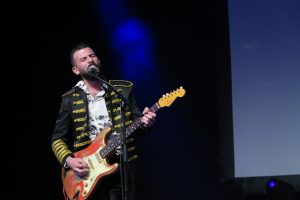 But as soon as they left the stage, Time started playing with us again, and back in Woodstock we were. Then, an alternative version of the Jimi Hendrix trio started playing. This peculiar version of the band of the first guitar hero ever, called the Trio Experience, had a white and healthy Hendrix, but, man, the three of them could play! One by one, all the classics of the formation who sadly were only able to release three records, were perfectly played. After a few songs, the members of Twisted Nerve appeared at our side, captured in the same time loop as we were and sharing the same confusion that we had already started feeling. 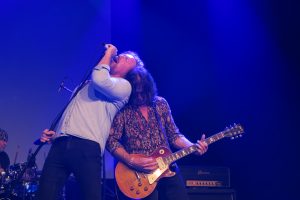 Next was the turn of Letz Zeppelin and this time, the similarities with the band of Jimmy Page and Robert Plant were astonishing. They played with the same power and energy that I guess LZ used in their day. A great setlist, focused on the rockest pieces of Led Zepp, followed by only the eternal “Stairway to Heaven” giving the audience a rest. Really good. 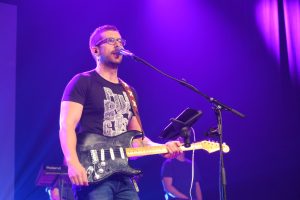 And Floyd closed the night with a really intense setlist, like the one that the real Pink Floyd would deliver. But maybe it was too intense for a last concert and the already tired audience. Perfectly played, and well selected but I would have preferred a setlist focusing on hits. Although we heard “Money”, “Another Brick in the Wall” and many others, but the time travel really tired us.

So, the day was arriving to its end and there was nothing else that we could do but going to the camp. And hoping to wake up in the right Time.