I said in the first day of my chronicle that Primavera Sound festival had managed to rejuvenate while, sadly it was not my case. However, I must admit that each year, I spend more and more hours in the forum, and this Saturday, I spent 15 hours. Surprisingly, I remember almost everything. 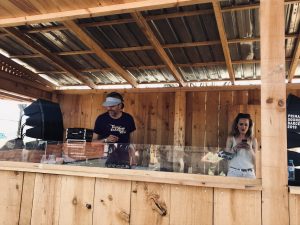 We began in the Xiringuito. This year, the programme was less interesting than last year’s. Only Saturday artists made us begin at 3 pm. When we arrived, Écran Total had already begun. We took a seat on a deck chair, asked for a Spritz and started hearing “Everybody Everybody” from the Italian Black Box: la bella vita! Her set continues with Novecento’s “Day and Night” (and my first dip), I’m not Superman’s “Escape,” Leonore O’Malley’s incredible “First be a Woman,” Art of Tones’ “Bootyshaker,” Felix Da Housecat’s “Frankie Meets Pauline,” some stylish French disco with Agatha & Regrets’ “Je ne veux pas rentrer chez moi seule” and Alex Mansion’s “Dans l’eau de Nice.” Great DJ set to start the day. 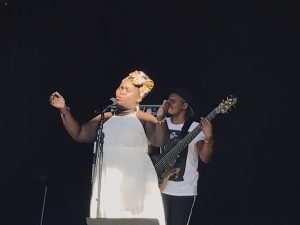 We’re already in good spirit, and DJ Supermarket’s session was just perfect to continue with. He began with The Kids’ “The Number Five,” and continued with Mathmos’s, “Your Love.” We danced wildly with Roosevelt’s “Movin’ On” and our treasured Jungle’s “Beat 54.” After this, he showed his world-class style with the great Luther Vandross’s “Never Too Much,” he flight high with Bertrand Burgalat’s “Icare” and completed the trio of aces with “Grandma’s Hand,” from one of our favourite voices: Bill Withers. He continues with Breakbot’s “Baby I’m Yours” and a remix of “I’m Free” from The Soup Dragons. He ended thanking the audience with the two DJs who had been playing before by his side, and received a great ovation. One thing, however: during Écran Total, the sound checks on the Lotus overlapped the sound of her session. 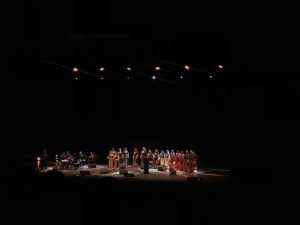 I was still wearing my bath suit when we headed towards the Rayban: according to me, it was what fitted the most, as we were going to see to the Cuban artist, Daymé Arocena, who truly gave a great concert. She and the pianist, whom work was awesome, managed to surprise us. We could not see the end of the gig because we wanted to see The Mystery of the Bulgarian Voices, who were playing with Lisa Gerrard. Thanks to the darkness of the Auditori, I could get changed and enjoy the show. For the first part, only the Bulgarian voices were singing. We could also assist to an incredible beatbox demo. After the first half appeared Lisa Gerrard. She added her magnificent voice to the already fabulous choir. 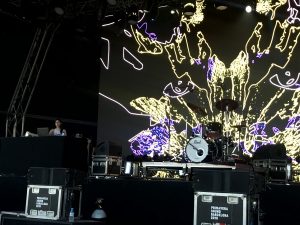 After that, we went running to the Bits zone where Rrucculla had some issue with her live. After a part of experimental electro, she played the drums, which never sounded well. The producer born in Baracaldo appeared to notice the issue. It’s a shame, we hope to be able to see her again in the future.

On the same stage appeared a bit after Channel Tres with two dancers. He began with “Controller,” and sang almost everything he has published: “Glide,” “Jet Black,” “Brilliant Nigga” and “Top Down.” We also danced a lot, and enjoyed the show.

In the Rayban Studio, Suzanne Ciani, pioneer of the new age, was competing against Rosalía and Drab Majesty in a triple deadly overlap. There were a lot of people around her, because the stage was in the middle of the room. She offered us 40 minutes of pure analog magic. 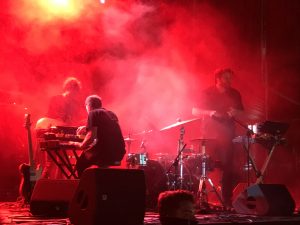 Even if we could not see Drab Majesty because of the schedule overlap, nothing was really interesting to us after Suzanne Chiani: Solange overlapped with the following show, we already saw Neneh Cherry some time ago, and I do not really like Jarvis Cocker if he does not play Pulp’s songs. We headed to the Night Pro, which is now in the entrance and has lost some of its charisma. We saw there Sistemas Inestables, Columbian trio of post-rock. The stage seemed to be too big for their show, and only a few people were there. They are influenced by krautrock and we could also noticed some cinematographic parts who would be perfect for a TV show like Stranger Things. We liked their work, even if they had some bad luck when the amplifier broke. Even this way, they managed to end their gig with “Azimuth Shift/ Zenit.” 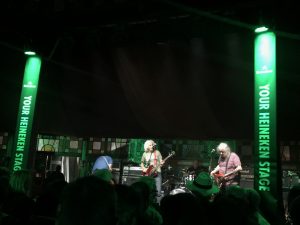 In the new Your Heineken Stage, one of the bands that was confirmed only one month before the festival, and, at the same time, one of the bands that I wanted to see the most, was going to play: The Bevis Frond. Nick Saloman’s tireless band gave a perfect concert with a very powerful and clear sound. It was incredible to be at that stage and to listen to that marvelous band. They started with “Hole Song #2 ”, “Johnny Kwango” and “Maybe.” We had incredible guitar playing, lot of feeling and some of their best tunes from their endless discography: “He’d Be a diamond,” “Superseeded” or “Pale Blue Blood.” It could have been the best concert of the festival but…

When the concert was finished, we went to see the last part of Primal Scream’s concert. Just when we arrived close to one of the bars of the stage, I recognised the beginning of “Swastica Eyes” and run to the crowd to appreciate better the music, but the unenthusiastic take that they were playing took me back to the bar. They also played “Loaded,” “Country Girl” and “Rocks,” in what they sounded to me, endless versions. I have to admit that some people liked it. 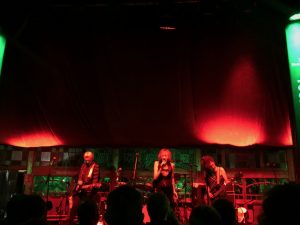 And the “but” from before was due to the concert of Bush Tetras. We did not know if the band was in shape, and were totally overwhelmed by the power displayed by this group from the 80s. The singer still has her voice and her charisma and the guitar player kept us open-mouthed during the full set: she had a very personal sound and a technic that was not frequently seen in the forum.  They played “True Blue” (not Madonna’s song), “Red Heavy,” “Rooster,” “Sucker,” “Betrayal,” the amazing “Cowboys in Africa” and, of course, “Can’t be Funky” and Too Many Creeps. One of the best concerts that I have seen in my life. 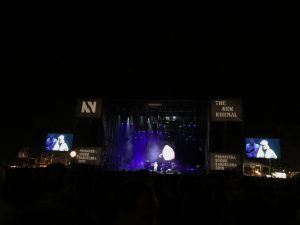 We went to the Primavera Stage to see Róisín Murphy, former singer of Moloko. There was a goodbye feeling in the air and we thought that it was a perfect concert to bid farewell to the festival. She started with “House of Glass,” sang “Demon Lover” and my favorite from her solo career “Unputdownable.” She finished with “Forever More” and “Overpowered.” The concert was done, the instruments were being removed but we were still there waiting for “Sing it Back”… 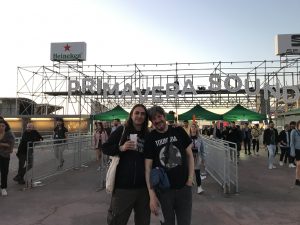 After saying goodbye to some friends, we decided that it could be nice to see the dawn from the beach. Although we continued with Martyn’s session at the Rayban Studio the place was too hot, so we decided to cross over the bridge again. We arrived just in time to see Avalon Emerson’s session: she was more focused than us. Her set was less hard than the ones we saw in the past and she managed to make us move in an almost rhythmical way, although we were just empty bodies. She played Eric Prydz, Taso & Siete Catorce, Leftfield’s “Open Up,” Oceanic’s Yellow Coney, Tony Palmer & Wally’s “The Oil.” The sun came out, we saw the faces of the people around us, shouted Oh My God! and left. As we went to the entrance, we felt as Attila as the music of the different stages was dying as we walked. At the entrance I had a photo, it was the first time that I was at the festival till the closing.