I’ve been going to Primavera Sound for ten years now, and this edition for me, has been one of the best: like a festival Benjamin Button, Primavera has managed to rejuvenate with the years. Unfortunately, it’s not my case. I began writing this chronicle on Thursday, after a not really memorable Wednesday. After three very interesting days, some of my opinions have changed but some still hold. For example, even if the brands have always been present at the festival, it keeps calling the attention to see a damn Pull&Bear shop, where there were once music stores. Of course, the public has also changed. Each time there are more curious people who don’t stop talking during the gigs, without paying attention to what happens on the stage. 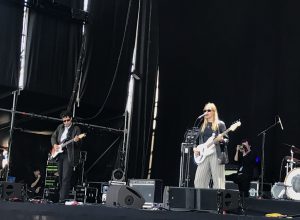 On Wednesday, we missed Melenas because my flight with EasyJet was delayed. We thus began our day with Hatchie. There were a lot of loudmouth English people among the audience, which was rare in front of the stage. However, a lot of people were sitting on the meadow in the distance. She began with “Try,” but the concert only began to become more interesting with the second tune, “Obssessed.” Then came one of her more famous tune, “Sugar and Spicy,” and another one, slower, “Stay True to Your Heart.” “Kiss the Stars” is the only tune I would qualify of dream pop. In my opinion, I would describe the rest as simple pop. “Bad Guy,” another good tune of commercial pop, was accompanied by unintentional sound effects coming from the laughs of drunk English people. The last songs consisted of “Sleep,” her best song “Without a Blush,” “Sure” and one tune that, according to her, she only had played once: “Stay with Me.” 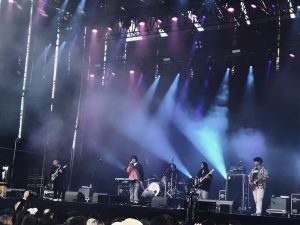 After this, it was Cuco’s turn to appear on stage. As the time was passing, more and more people were coming to the gig of the Mexican artist resident in the United States. In one of his first tunes, “Lover is a Day” the singer used the trumpet. This was then followed by another one from his sole album, Songs4u, “We had to end it.” People began to get energized with “Summer Time High Time,” above all when the first words in Spanish from “Amor de Siempre” could be heard. They continued with “Hidrocodone,” some small issue with the right screen occurred during “Neon Baby” and “Lo que siento,” another song in Spanish, which was, together with “Lucy,” the most acclaimed of his performance. He finished with an unexpected version of “Sufre Mamón” or “Devuélveme a mi chica” (by its true name) that definitely conquered the audience.

Big Red Machine’s show was burdened by the great number of talkative curious people who crowded the forum. Plus, this was maybe a too intimist proposal for a free day. They began with “Gratitude,” followed by “Easy to Sabotage,” a new tune not featured on their sole album, “Air Stryp,” “Lyla,” the autotune-filled “Styffe” and “Hymmostic.” They followed with the piano theme “People Lullaby,” a more relaxed tune of a very little festive set. With the band, Julien Baker, wearing a T-shirt of Messi and another chorus girl were singing barely audible choirs intermittently. They also played an instrumental theme, “Misha,” and some electro rhythms gave way to “I Won’t Run from It.” An intro which sounded like Massive Attack marked the beginning of “Hickson.” Then, more tunes: “OMDB,” “Deep Green,” which reminds me of Peter Gabriel, and a new one, called “Reese.” The show ended with “Melt,” and we run out of the festival to take a taxi. Surprisingly, we were very lucky and a few minutes after, we were already having a drink in front of the Apolo venue. 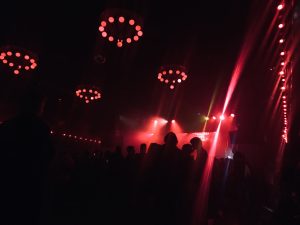 We entered early in the Apolo, and we went to the 2 room in order to assist to Lolina’s live. After a part I would call deconstructed to speak like a modernist, her show began to be more consistent while the beats were getting more and more present. This was the surprise of the day, and we took note of her name to go and see her in a better occasion.

After that, we went to the main room to go and see Coucou Chloe. We were eager to see her, because we quite appreciate her tunes. One DJ was preparing the ambiance, and she came to sing with a perfect playback “Flip U,” some tunes we did not even recognize and our favourite, “GS.” She jumped, showed her butt (I was not watching the stage at that time), and she danced a lot. However, in general, the audience sang far more than her. 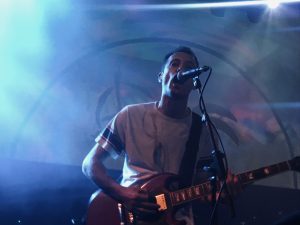 We finished the day with Fucked Up, in what would prove to be one of the best gigs of the festival. With a thunderous volume, they began with “Dose Your Dreams,” followed by “Son the Father,” “Crooked Head,” Raise Your Voice Joyce,” and a continuous craziness of crowdsurfing people. There were almost always people flying above the audience in the first rows, and the singer repeated several times that this was one of his best shows ever. In the last two tunes, “Accelerate” and “The Other Shoe,” people made a circle and began to pogo in a crazy way. It was really amazing. After this, tired and still with my backpack, I made my way back to the hotel to grab some sleep. Some marathon days were still waiting for me in the forum.