The new reference of the label from Madrid Industrias Mekanikas is a mini Lp by Mova, a young producer from Georgia who could not debut in a better way. The six tracks that we can find in Tsriuli Brunva have been released a couple of days ago and we hope that we will be able to enjoy them in a club soon. We could see Mova playing live this summer as part of the line-up of an edition of United We Stream where also participated Downwell, another producer from Georgia, that we know thanks to another reference of the label from Madrid. You can listen to the mini Lp and order it on the label’s web and Bandcamp.

The industrial desolation of the initial “You Hate it You Regret It” really makes us feel at home, with its powerful beats, it would be perfect as the soundtrack for a movie like “The Road”. “I Am Well Today” gets, at some moments, close to industrial techno and it’s wonderfully frightening. “Less” is definitely more, with its persistent rhythm that will possess your body at the same time that keeps the apocalyptic vibe of the album. In “Naxes Ucxo” the sampler of voices are as frightening as in the A-side, but the track gets closer to the dance floor although the rhythm wants to mislead us, “Dabrundi” sounds more acid/industrial techno, and it’s our favorite to DJ. “Yoo Bitch” as the name states, doesn’t mess around, it’s a hard track with a final that we would love to hear outside of our living room. 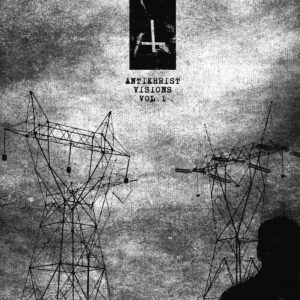 For those who still don’t know Industrias Mekanikas, we can tell you that it’s Ruben Montesco’s label, focused on the darkest part of electronic music, a place where industrial, EBM, acid and techno live together. This is the fifth reference of the label whose first album was Mad Mixes – Tributo a Esplendor Geométrico that included four remixes of the industrial band Esplendor Geométrico, one of them by the own Ruben Monstesco and another one by his project Anacronismo Industrial that he shares with the DJ and producer Waje. Last Saturday, when I was watching a boiler room with Identified Patient at the Dutch festival Blijdornos I happily recognize Ruben’s remix as part of the DJ’s selection. Also, readers of the Garaje surely remember the cover of the album as it has featured on our “Listening now” section as the album has been an important part of the soundtrack of the last months.

The second reference was the Terapia EP by Ruben Montesco, where he shows his nineties references and pays tribute to them in four interesting tracks. Our choice is always the darkest one: “Viscous Sensations” and the powerful “Ibiza Terrormix”.

And the third and fourth references belong to the two volumes of the compilation Antikhrist Visions. From the first one, we recommend the arid and industrial landscape of the first track by Anacronismo Industrial, two acid tracks that will take you back from the grave, the first by MTS/76 and the second by Do or Die, and “Noise Control” by the boss of the label. And we can’t forget to mention the incredible last track by Oriok 101. In the second volume, we can find a composition by legendary producer Dave Tarrida, the real hard “Body Stretching” de Downwell and the nightmarish atmosphere of J. Gonzalbo. A label to follow, without any doubt.