The only Vice Squad that we like at El Garaje is an English Punk band, formed in Bristol in 1978. To make the most of their future live in Madrid, we talked with Beki Bondage, the charismatic singer of the band. Their first concert in the Spanish capital is going to be on the 13th of June, at Sala Buts, as part of the fourth edition of the No Future Fest. Tickets can be bought at Potencial Hardcore, Escridiscos, Punk Rocketz and Chopper Monster and online here. 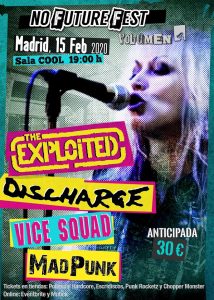 —Beki, how did you become part of Vice Squad (I mean, what became Vice Squad as the name was your idea)? How did you meet the other guys?

— I saw an advert for a singer in Revolver Records store in Bristol and went to meet Dave Bateman, the original guitarist who sadly died in December 2007, and drummer Shane Baldwin. They told me that I had a good voice and image and I was in. Mark Hambly then joined as bassist and we began rehearsing in his parent’s garage. I thought of the name “Vice Squad” which the rest of the band liked and we did our first gig when I was still at school so that was pretty cool.

—In the late seventies there were some punk bands with girls, like Penetration, The Slits, The Raincoats, X-Ray Spex, Patti Smith and Siouxsie and the Banshees. Did you like their music or have any personal relationship with them?

—I liked their music, in particular I liked Poly’s and Pauline’s (Penetration) voices. I didn’t personally know any of them when I first started singing but in later years met Ari Upp, Siouxsie and Pauline.

—“Humane” was the band’s first animal rights song, back in 1982. How was veganism seen back in the day in the punk scene?

—There were a few Vegan Punks back in the eighties but there are far more today. It was a lot more difficult to get vegan food back then and I used to go without food when we toured. People used to mock me for my Animal Rights beliefs but those people aren’t Punks any more.

—Stand Strong Stand Proud (1982) is considered the best album of the 0riginal line up. Do you agree on this? 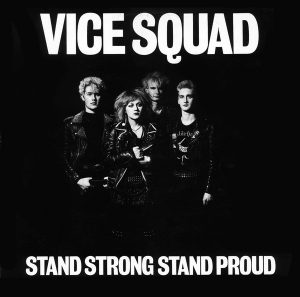 —No Cause For Concert (1981) is more aggressive but the overall sound is pretty awful whereas Stand Strong sounds a little too “pop” for my taste but the songwriting is a better. I much prefer the newer albums like London Underground but you expect to get better if you keep going and I think both of the early albums are OK when you consider how young and inexperienced we were when we made them. The music was rough because we were really young, i.e. still at school and living with our parents. I think ineptitude is rather charming in teenage bands but irritating in older bands who use the “Punk” label as an excuse to be lazy. We were all self-taught and very raw so we ended up sounding quite unique.

—Vice Squad has started two labels, first Riot City Records and now Last Rockers Records. I guess it’s way better than to have to depend on a label, right? Has the band thought of publishing other people’s records?

—We don’t own ’Riot City Records’, I came up with the name and we were the first band (and most successful) on the label but it didn’t belong to us, it belonged to Simon Edwards of Heartbeat Music. “Last Rockers” is our own label, we own it, so we have to do all the work! It’s a very small DIY label so we haven’t thought about releasing other bands on it.

—In the eighties, Paul and you, Beki were part of the Bombshells doing some hard rock and you have always said that the days in this band were really hard. How was the band received, having a singer coming from punk?

—We ended up starting from the bottom again and playing pubs on Monday nights for whatever money was collected in the jug, nobody knew who I was and I enjoyed the anonymity. We worked really hard and were completely DIY so I retained my Punk ethics. Even though it was difficult and I was poor we had some really good times and it enabled me to develop my voice and hone my songwriting. 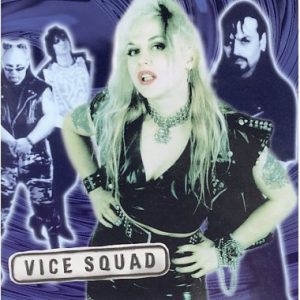 —The first album of the new incarnation of the band was Get a Life (1998). How this comeback was received in the punk scene?

—Interestingly, people tell me they love this album now but I don’t remember it being well received at the time. We recorded it in my front room so it’s certainly DIY and I still like some of the songs, in particular “Business As Usual” and “Westend Stars.”

—Rich and Famous (2003), your record with EMI have a more poppier feel, did the company push you to try to write singles or have a less punk sound?

—No EMI didn’t tell us what to do, I blame this album on Paul, he likes a lot of pop stuff and insisted on adding all sorts of weird sounds. I now have final say over which songs go on our albums!

—You can’t blame the band for making always the same record: Defiant (2007) sounded more metal. Was the band listening to more metal sounds during these years?

—Defiant is definitely heavier than the earlier stuff but it doesn’t sound Metal to me, it was written in anger and frustration and we captured that in the sound. We still play the title track and “Voice of the People” in our live set. This album did well in the USA, we did an in-store signing in LA and kids were queuing round several blocks to get their Defiant CDs and posters signed. We thought it was going to be like the signing in the Spinal Tap film where no-one comes so we were very pleasantly surprised when all these people turned up to meet us.

—London Underground happened naturally, there was no conscious decision to make it sound Old School, 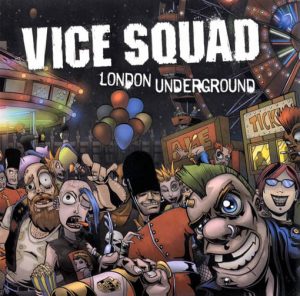 even though we included a song by that name. The sleeve artwork by Landon Armstrong is brilliant, we know of 2 people who have the sleeve tattooed across their chest and back. We still play “Ordinary Girl” “Sniffing Glue” and “Starvation Box” in the live set. I don’t think you can define a single UK Punk sound as there are several styles.

—How did the band started releasing Christmas EPs?

—We did the Christmas EPs for a laugh, people need cheering up at Christmas as sadly it’s a bad time for many.

—We have interviewed a few bands that have funded their records with Pledge music, but your campaign is the first that we know that also raised funds for the Shelter homeless charity. What can you please tell us of this project?

—The album is called Cardboard Country (2014) and we got the idea from a part of London that was known as “Cardboard City” because of all the homeless people sleeping there in cardboard boxes. Homelessness is a major problem in the UK, it is a shameful situation in such a rich country. It seemed right to donate part of the Pledge funds to Shelter, Shelter has helped 2 members of the band so we wanted to support them.

—How has the punk public changed since the eighties?

—They are older (obviously) and sometimes wiser, some are still totally Punk whilst others like the music and the clothes but have otherwise normal lives with jobs, mortgages and families. Some have kids who are into Punk and they bring them to gigs so there is a new generation of Punks.

Some of us can’t “grow out” of Punk because the political songs we wrote from the safety of our bedrooms in our parents’ houses turned out to be true. For example “Last Rockers” is about WW3 and we now seem to be heading in that direction.

—What can you please tell us of the forthcoming new album Battle of Britain?

—It’s very political, very angry and very defiant, tempered by big riffs and vocal melodies. I loathe injustice so I always find plenty to sing about.To lighten the atmosphere we added “Pulling Teeth” which rips the piss out of what’s left of the music business and the struggle of trying to keep a band going and “Ruination” about small-time promoters/managers who think they are Peter Grant.

—Where do you look for inspiration for the lyrics of the band?

—I am constantly inspired because the world is such a mess and the people who run things get more evil and the people who elect them get more stupid. As I write this Australia is on fire and has already lost around half a billion animals and Trump is trying to start WW3, I won’t be short of subject matter any time soon sadly.

—In an interview to a Spanish ska punk band, they said that it’s difficult to fight against capitalism and at the same time be part of the capitalist system. What do you think about this?

—We’re all part of the system whether we like it or not, you can’t blame people for trying to operate in the situation they are in. All you can do is use your money, brains and kindness as well as possible. Money isn’t the problem, the love of money is the problem. Factory Farming is probably the most obscene example of this. I have never understood extreme greed, one of the greatest pleasures in life is to help others.

—How many times has the band played at Rebellion? What’s your best memory of the 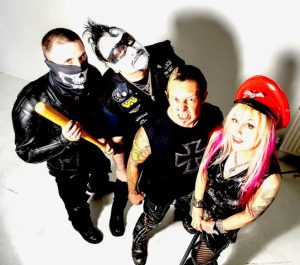 —I would guess we’ve played Rebellion Festival, including when it was called Holidays In The Sun and Wasted, about 18 or 19 times.

One of my best memories is playing the outdoor stage in 2016, we had a fantastic gig and a great sound.

—Has the band experienced any problem when touring because of Brexit?

—Not yet, but it will cause problems when we leave the EU. I call it Brexshit because I am so bored with the arguments about it, it has divided the UK and no-one seems to know what they’re talking about.

—The new far-right party has won a lot of votes in the last Spanish general elections. What do you think of the of far-right parties in Europe?

—I think they need to be machine gunned by Spitfires… Millions of people died fighting Facism in WW2 so it appears that humans are the stupidest animals on the planet as they keep trying to repeat the same horrors.

—What do you think of trap? It seems that youngsters nowadays prefer trap to more rock-based sounds.

—Some of it’s OK, everyone’s taste in music is different and lots of new styles of music are actually Punk in attitude and lyrics. Lots of younger people are very aware of climate change and Animal Rights, and this is a really good thing.

—What can we expect of your concert at No Future Fest?