Trans-X’s hit, “Living On Video” sounded futuristic in that far away 1983, a kind of robotic music for better tomorrow. So far, the 21st century hasn’t been so great, but Pascal Languirand’s project is still here to make us dream. We will listen to his hits and learn what  “psy energy” music sounds like on the 24th of June at Sinner’s Day Summer that will take place in the Belgian beach of Ostend. 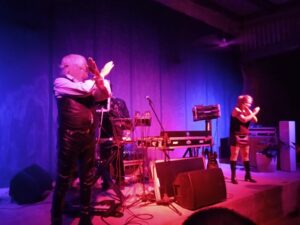 —You started making electronic prog music, influenced by bands like Tangerine Dream and recorded two hidden gems of the genre: Minos and De Harmonia Universalia. You made also some soundtrack work and music for ads. Can you please tell us more about this?

—I started my career composing and producing music for television series. I was very influenced by the first electronic bands and the space soundtracks that they were making. I was a very shy person and had difficulty interacting with other people so I was doing this space music as an escape from reality :). But actually I enjoy very much space sounds and music to relax to, and I am a very good space music composer.

—The name of the band comes from Kraftwerk’s Trans Europa Express. What did you like of them?

—I really liked Kraftwerk, they were a retro futuristic band very minimal so I chose Trans Europe Express as the name of my band Trans-X (TRANS Europe eXpress)

—At the beginning of the eighties, you used to hang out with the members of Rational Youth (we also interviewed Tracy Howe) and Men Without Hats. How do you remember those days in Canada?

—Those were the days you could buy a synthesizer for as much as a guitar with amp, so I was very exited and started to purchase several synths as part of my composing tools. I left my guitar aside and became a Synth Pop lover. Also this was the time of the video games arcades, these were the first video game consoles, so I wrote “Living On Video” after hanging out at these Video Arcades.   All these 80s bands were making retro futuristic music. Gary Numan, etc. It was also the time I started to go out to clubs with my schoolmate Ivan from Men Without Hats. We went to the same college. The 80s were very creative years.

—You said that the track “Living On Video” was inspired by the movie “Tron” and the idea of living inside a video game. Now it’s possible to have a virtual life as video games have

developed a lot. Are you interested in them or in composing music for them?

—”Living On Video” was used in a video game. I am open to composing more music for video games. But for now I concentrate more on my new live show. I love to perform live.

—What happened with your second album, Living On Video that has the same cover but mostly different tracks that the first release? Don’t you think it could be a bit confusing for people who already bought the first LP?

—I agree it was confusing, but “Living On Video” was a hit in different countries in different years so the album was “updated” several times. 1983 was the first release in Canada and the Netherlands, later in 1984 it was a hit in Germany and the rest of Europe, Mexico and South America. In 1985 it hit the charts in the UK, in 1986 it hit in The USA. This was the time I relocated to Los Angeles, California.

—You said that HI-NGR has been an influence on later styles as EBM. Can you tell us more about this? As you lived in Spain for a few years, I guess you might be familiar with the Valencian scene from the eighties. I think that the influence of your music can easily be traced there.

—Living On Video was a Synth Pop song but it was also a very big Dance music. Hit. It was labeled ”Hi Energy” in Mexico but in other countries it was labeled “Euro Dance” or “Synth Pop”. Dance music always evolves and transforms. I did do ballet jazz classes in the 80s, I used to love to dance, But now I concentrate more on playing my synth 🙂

—What happened with On My Own that did not chart? The taste of the public had changed in those years?

—On My Own was not enough “Dance Music” I suppose. It was more of a pop record. So I guess for that reason it did not do well. Also “House Music” was happening more. So it was just bad timing.

—You said in an interview that you had some problems with the labels you recorded with for your first albums. How were big companies back in the 80s according to your experience?

—Back in the 80s if you wanted a record contract you had to sign away most of your rights and give them your first-born child 🙂 But today it is the same, the labels make 95% of the revenues from streaming, etc. It is challenging to make a living as an artist.

—You stopped Trans-X in 1988 and made some ambient works, like SOMA with Jacques Languirand. I guess he was your father, right? What did you find interesting in ambient music? Did you see it as the evolution of your first works?

—In 1989 actually. I got divorced and moved back to Montreal, Canada, from Los Angeles. I was in a big depression and did get back to producing “Spacey Music.”  I was not inspired to make Dance Music anymore. I produced at the time the album Gregorian Waves all sung in Latin and old French, one of my best works besides Dance Music. 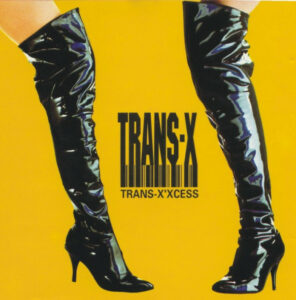 —You were back with Tran-X in 1995 with Trans-X’Xcess. What made you return to this project?

—I had a friend in Barcelona, Spain, who wanted to invest money in a new Trans-X record. So this was an attempt to produce new Dance Music and to return to the Pop Music scene.

—In 2012 with the Hi-NGR album and later with Dreams Are Made Of Fantasies you included some original tracks and new remixes of some of your classic songs. I put these albums as examples, but you have always been doing it. Do you like to update the sound of the songs or are you looking for the definitive version?

—I guess I am never totally satisfied with a track and I try several times to make a better version of a song until I find the right way to produce it. But also there are many Dance Music styles so I like to produce several versions and mixes of a track.

—Actually, I was removed from the band in Spain. They thought Trans-X was better as a Drag Queen band. I was not making any money at the time with Trans-X, I was very depressed so I abandoned music altogether and started a new career making websites for clients. At the time I was programming with Dreamweaver, Flash, etc. Also I was producing video for musical groups. I thought my time in music had passed.

—Luana Viana is your wife and new singer, right? What has she added to the sound of Trans-X? I read that the main Psy-Trance influence of the album comes from her, right?

—You are right, Luana made me discover, “Psychedelic Trance.”  I really love this style of music. It is a logical evolution from Hi Energy. So we incorporated elements of Psychedelic in the new tracks. It is a hybrid style but it retains most of the Hi Energy sound, it is just updated.

—Your last EP is entitled Psy Energy and consists of four remixes of old songs. It could be seen as a step forward after your releases from 2013, Trance versions. First you had “trance versions” of your songs and later you mixed trance with your own Hi-NRG sound, right? 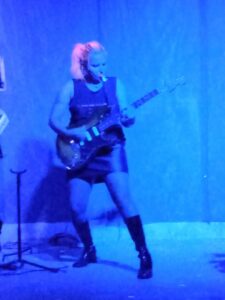 —This is absolutely right. It is an updated sound to present Hi Energy to a younger generation.

—You have made the soundtrack for David Dávila’s documentary “Discolocos”, how was the experience? The documentary is about Hi-NRG in Latin America, right?

—The movie is about the Hi Energy movement in Mexico City. It is strange how this style of music is still very vibrant in Mexico. It was a very good experience to get back to producing Hi Energy music for the movie.

—One of your side projects I would like to comment is Cybernium. You worked with Michel Huygen, who released some interesting electronic albums in Spain in the late seventies with Neuronium. How was the collaboration born? ‎

—I would rather not talk about this part of my life in Spain. A lot of money was stolen from me and I had to start over my life, and abandon music for a number of years. In 2004 I returned to Montreal, Canada, from Spain. I was ruined, had no money left and had to go and sleep on my sister’s couch. Later that year I was admitted in a psychiatric hospital. I have borderline personality. This was when I hit the bottom. From there, I could only rise again from the ashes……

—You have been living in Mexico since 2008. How has the experience been? You moved to Merida recently, didn’t you?

—After almost 15 years living alone in Mexico City, and after one year speaking on video chat, I sent Luana a plane ticket and asked her to come and live with me in Mexico City. We got married in 2021 (she is Brazilian). Later, we decided to move to Mérida, Yucatan. This is where we have the new studio “Hangar Sónico” with our friend and new member of Trans-X Ramón Serratos, “DJ Rams.”  We love it here but the weather is very hot during half of the year. But the beach is only 30 minutes away.

—In Mexico, you have created your own label, Skypark Records. What are your plans with this label? Any future release that you can advance us?

—Actually, I created a label called LOV RECS in Mexico City in 2009 but sold my shares in the company 2 years ago. Skypark is not my label. I just want to be an artist from now on and have no plans to be involved in a label besides producing new talent.

—I read that one of your projects is a kind of performance with dance, trance and pre-Hispanic sounds. Can you please tell us more about this? It’s called Teyolia, right?

—Yes, “Teyolia” is a project with pre-Hispanic dancers “Guerreros Águilas” (The Eagles Warriors). The music is almost finished. We are currently incorporating traditional chanting into the tracks and will present this as a multimedia live show in the future.

—What can we expect of your future concert at Sinner’s Day?

—At “Sinners Days Festival” we will present the new live show with “Psy Energy” music incorporating my synth with Luana’s electric guitar. We had very good feedback from this new live show. I was not expecting such an overwhelming reaction to this new style. I think this new project is the best thing I did since “Living On Video”.