Larva is one of the oldest Spanish EBM bands and they have already released ten records where they show us their scars and the broken hopes of a wasted youth. We talk with InqUesT, just a few weeks before his concert at DarkMad where they will prove that their underground worlds are controlled by pure darkness. Remember: Friday 25th October, Madrid. 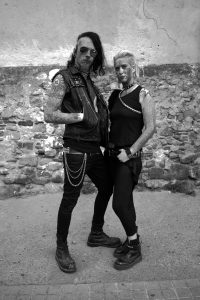 —The first incarnation of the band was called Morbid Mind, right? Any plan of releasing the tapes done with this alias?

—Yep, and no, there is no plan to release it. I don’t have that material, and I’m sure it sounded like shit, so it’s better for all of you not to release it. Hahaha

—Was it also you the one who used the name Morbid Mind again for a remix in the Entre Agujas record?

—Yep. It was because the remix was made under the Morbid Mind perspective. I mean, noisier and more experimental.

—How were the first years of Larva, until the release of the first album?

—Funny! Almost no equipment, but lots of energy, and power. We were a lot into experimentation, and with a very open mind. Soon, we started to do live shows, that were as chaotic as the songs. I have very good memories from that period…

—Which bands have influenced Larva?

—All the bands we were listening while we grow up. A lot of dark electro from the 90s, synth pop from the 80s, goth rock from the 80s and 90s, and punk from the 70s until now. We have very eclectic taste.

—The first album Diogenes Syndrome was released in 2005 and the style of Larva is basically there. Do you think that the sound of the band has changed with the years?

—Yep, of course. Not in an intentional way, but we have changed. Now we have more knowledge and equipment… so I think the overall quality of the sound is better. Even now, the compositions are more complex. At the beginning we were more “minimalistic” and maybe we had more raw power. Now the skills in sound creation, mixing, mastering are better… so this is reflected in the latest albums.

—Most of your albums have been released by a Hungarian label, Advoxya. How did the band start working with them? 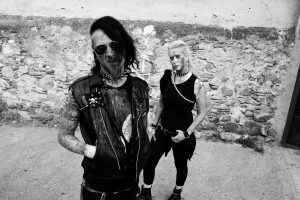 —Mmmm, it was a very “special” starting point. Hahahaha. We began with them in our third album Voces del laberinto. Just before, we released with Komblok Records (USA, now defunct) and later, we had some self-released stuff. I remember the joy after the Advoxya Records answer about releasing our Voces del laberinto. But they complained a bit: “Your album is good, but when I’m listening about the third song, I’m falling sleep. We need more faster songs” And of course, I was pissed off like “If you don’t like it, don’t release it, but don’t fuck me off”. Hahahaha. 15 years later, we have a complete freedom creativity with them. So, we are happy! 😊

—Is it difficult to find a Spanish label interested in EBM music?

—Yep, not only a Spanish, but worldwide! Maybe not for us, we are old enough, and we have our fanbase. But for the young bands, starting stuff? Definitely, yes. They can release their stuff digitally, etc. but to be seen in Internet, means promotion, and promotion is made better by a Record Label.

—Do you think that you have a negative point of view about life?

—Hahahaha, even you can think that, after listening to my music… I don’t think so. I am a very positive person in fact. But my music is some way to exorcize my inner demons. I’m a very vital person, so I like to be happy, to enjoy every moment of life in general. 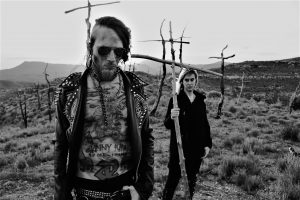 —The band has released ten albums in these years, which one is your favorite and why?

—I’m really happy with the last album Mundos subterráneos; because all the tech stuff… you know; I think it sounds better; it’s better mixed, mastered, I have more ways to express myself now, etc. But I don’t have a favorite one. Each one is a piece of me, and each one has their own lovely memories. Even, when they are released, I try to never listen them again… hahaha

—Where do you find inspiration for the lyrics?

—In my day-by-day basis. It’s all about feelings. We live in a very small town; so we take a walk with my doggies into the forest, the river, etc. Nature is very inspiring.

—From where do you take the vocal samples of your songs? Old movies?

—Yep, movies (old and new); TV shows, even recording it from the street. Almost everywhere. It’s always funny when, after a live show, somebody comes to me, saying: “That sample from the fourth song is from that movie, right?” You can always find a “freaky” like me, able to identify that, hahaha.

—Since 2009, the band has played a lot in Mexico, and have done a few tours there. How did the band go there for the first time? What can you tell us of these tours there?

—Our history with Mexico was love at first sight. We were lucky enough to find a promoter over there in 2009, which took care of all the tour. That was really awesome, because it was our firs time there ever. On our first night, we played in a big fest called Necropolis Fest, in Tijuana. It was a blast, and funny as hell! Then we did a LOT of dates all over the country. The experience was amazing. And from then, we were touring over Mexico almost every year. The country is big enough, so you can play 4-5 weeks going from one city to another. The scene there is amazing, and we had some kind of connection with the people there. Maybe because of the language, the feelings… I don’t know it really; but we have a special feeling between them and us. Now we are well known over there, and as I always say: they are the best crowd in the world!

—The band is also big in Russia, right? Even one of your compilations was done for that market. How is the public in Russia? 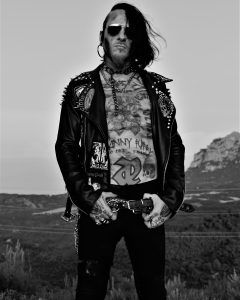 —We had almost the same feedback in Russia than in Mexico, but changing Tequila for Vodka, hahaha. We did 3 tours over there as well (the first time we began in Siberia, in December!! Lol) And the same, we have a special connection with the people over there. Just before our first time, when the tour was being booked, we thought that the crowd over there would be more “cold”, more in a European way. But nope, finally we discovered that they are really a “hot” and powerful crowd. Almost as crazy (in a funnier way) as the Spanish people! Hahaha They understand the liveshows as us; not only “playing music live” but as an entire live performance. Theatrical, dramatic, musical, etc. And of course, Russia is big enough to play some weeks of nice liveshows.

—Can you tell us anything about the new project in which you are involved, NUKES?

—Hehehehe is really funny, because during all these past years (more than 15) I was always asked about create another project, collaboration, etc. And I always answered NO. But this time I can’t refuse. To work with some of my idols it’s awesome! Guys from KMFDM, Ministry, Attrition, etc. it’s a dream come true! We plan to release an EP soon… and maybe some live show dates…

It will be really special to have so many members on stage. It’s a project we just started by the crazy idea behind the boss of No Devotion Records (USA/Mexico), and his insistence. You will see… for us it’s really inspiring, we don’t have any creativity limitation; and the workflow with the other guys is really cool! So you can expect a “bit” of craziness.

—Crazy, raw, and powerful. We always have fun on stage, and we look for that special connection with the crowd. If we have fun, the crowd will have fun. Our liveshows are always very theatrical, full of feelings, interactive and crazy on stage. This time we will incorporate new elements on stage… so hope you will like it. See you there guys!