Jay Aston’s Gene Loves Jezebel, recorded some of Goth Rock cult classics but also became a very successful band during the 80s. After some well-known problems inside the formation, they are back. They are a reborn band as we could appreciate with their last album, Dance Underwater from 2017 and their numerous gigs. We will have the opportunity of seeing them live at the Sinner’s Day that will take place from the 30th of October to the 1st of November in Belgium. 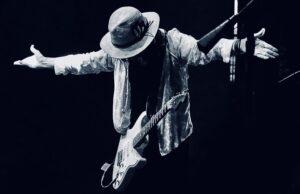 —Why did you decide to change the name from Slav Aryan to Gene Loves Jezebel? Two of the tracks of your first single, Shaving My Neck were written by your first band, right?

—We’d just left Wales and I’d got us a prestigious gig at the Institute of Contemporary Art. It was a new beginning for us and I wanted a fresh start in London. I wrote them both. They’re both pretty much the same song. We finally perfected it and called it “Punch Drunk” and it was a B-Side to “Bruises.”

—What were your first influences as a musician? The name of the band is a reference to Gene Vincent and you have said that you were into glam when you were a kid. Anything else?

—My biggest influences were the Beach Boys, Neil Young & a ton of great singers like Joni Mitchell and Steve Marriot.

—Your first album, Promise was the more Goth of all our works. How do you remember the goth scene of the 80s?

—Not too much love shared between the bands. Very competitive and often hilarious. The fans were close to our own ages and would follow us everywhere and were big part of the adventure. The music press generally hated us all. Very tribal I guess you’d say.

—How did the sound of GLJ evolve with the addition of James Stevenson in the Discover days?

—James brought a lot of musical ideas and I’d say we probably became more confident as a band in every way. It’s fair to say we became more mainstream, but he also added a lot new and more complexed textures to our body of work.

—A lot of your fans really like House of Dolls. Instead your brother did not like it. What are your thoughts about that album so many years later? 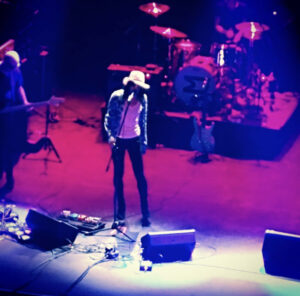 —We worked very hard on the album. My brother had little to do with it, yet he put his name on more of the songs than anyone else. Funny way of showing his distaste for the album, he performs so many of the songs live. He goes where the gold flows.

—What happened with Savage Records? Someone run with the money?

—I’m not sure of the details, but I believe the owner’s father pulled the plug.

—What can you please tell us of your first solo album, Unpopular Songs?

—I write a lot of songs and James had started his label (Pink Gun Records). I’d always loved doing my songs with acoustic guitars and he suggested I do a solo album. I let him pick the songs as I’m just too close to my own work and couldn’t possibly be objective. We recorded at our friend Emile Lobo’s home studio in Battersea. Emile engineered the album and along with James, played lot of guitar on the album too. There’s only one song with drums, which were played by Robert Adams. Craig Adams (no relation to Robert) plays bass. On reflection, I don’t think we should’ve added drums. It would’ve been perfect as a 100% acoustic album.

—Some of these songs were later used in VII. This album has a different sound compared with your previous records. Is it because the songs were from your solo career or were you interested in a different direction back then?

—We’d slimmed down. Enough of the excesses of the 1980s. We needed to get away from the production values of that decade. Present the songs in a purer, uncluttered way. My solo work went by without much fuss and fanfare and pretty much zero interest from the media. This freed up the songs for the band to have a bash at.

—What can you tell us of your second album, Jezebel? Honestly, I could not find a lot of info.

—There were a lot of songs and recordings that I liked, that were just sitting around. A large chunk of them I’d recorded in Augusta, Georgia and L.A. after the demise of Savage Records. I needed a break from all things GLJ and worked primarily with French guitarist Francois Perez (and keyboard player James Fairey in Georgia). Four of the songs were recorded by the late Stephen Stuart Short in Los Angeles, including “Vampyre” (Who wants to go to Heaven), which we still often play live. 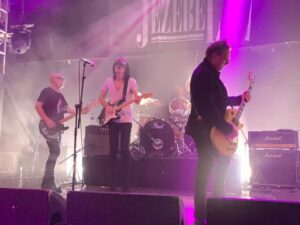 —Why didn’t you release new material during these years before Dance Underwater? Legal problems maybe?

—I’d just had enough of everything.

—How would you convince an old fan of GLJ to listen to Dance Underwater?

—I’d hope they wouldn’t need convincing and at the very least be very curious.

“How do you say goodbye to someone you love” should stir something. We often play it as the last song in our live set. Not many bands have ballads strong enough to close the show with. It’s very moving.

—You said that the biggest difference on that album was Peter Rizzo’s influence. How would you describe it?

—Pete (’Bugg”) and I worked a lot together as ‘Ugly Buggs.” He had a lot of music and pain to express and developed massively as a songwriter and singer during our time recording and writing in York (where he lives and Ugly Buggs work from).

He had a big input into the whole of Dance Underwater.

—Who Wants to Go to Heaven?, from your first solo album was written for the movie Interview with the Vampire (1994) right? But at the end Guns N’ Roses cover of “Sympathy for the Devil” was chosen for the movie. Can you please tell us a bit more about this?

—Anne Rice loved “Kiss of Life” and they were making a movie. I’d never written a song for anything before (although different songs have turned up in a few places in T.V. and film) and I felt inspired. I don’t think it helped that we’d left Geffen.

—In an interview you confessed that you lost your voice in the past and it took you two years to recover. Can you please tell us more about this?

—Smoked 40 Marlboro cigarettes a day. Drank too much wine, shouted too much. I was very unhappy.

I was in Manhattan and a Sinead O’Connor song came on the radio and it was something I used to glide effortlessly through before. It was one of those “sort yourself out” moments. My voice is what sets me apart and a gift. I went through a long process of learning to sing again. Quitting cigarettes was a major step (quitting alcohol was easy and a joy after that test). If you push your voice too hard, there’s no “let’s try that again,” you have to rest & wait for it to recover. It took a lot of discipline (not something I think I had in my larder).

—Did you lose any important material during the Universal Studios fire? 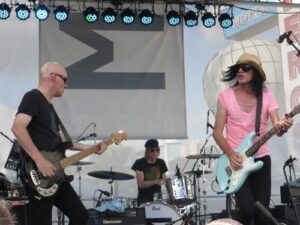 —I’m not sure. I hope not. Heavenly Bodies would’ve most likely been stored there. It’s our best album, in my opinion. By some distance.

—What can you please tell us of the band called Ugly Buggs? It’s composed of you and Peter Rizzo, right?

—It was something Peter and I planned to do after House of Dolls. We’d had enough of my brother and planned to split GLJ. My brother left, we carried on. Peter brought up a family and it was a lifetime before we actually got to work closely together. It’s deliberately darker and more theatrical. We wear makeup and wigs when we play live (only two shows so far. Both fantastic though).

—Jean-Marc Lederman was part of the band in the eighties. What do you remember of him? Have you followed his prolific career? I guess you are still in good relation with him as you collaborated in two of his albums?

—We’re still great friends and he is the sole reason I started recording again. He got in contact and asked me to sing, “Moonlight Mile,” which happened to be a favourite song of mine. I woke up.

—Also from that period of the band, there was Julianne Regan, who became famous later with All About Eve. Did you follow her career?

—Absolutely, Julianne is fantastic. Such a pure voice and a great understanding of complexed harmony.

She’s also a wonderful human being that does give a damn. She has sung on a few with me. It’s the original GLJ when Julianne, Jean-Marc and I record. I just noticed we all have the initial “J.” 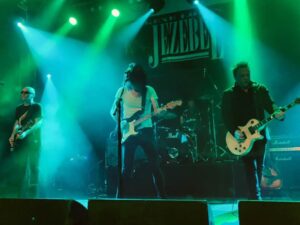 —How has the pandemic affected your life? Did you have a lot of gigs canceled? The band was part of The Mission tour canceled before Covid.

—We’ll be resuming & finishing that tour with our good friends The Mission ASAP.

We had to cancel several tours. 2022 looks promising, though.

I didn’t expect to be marooned in the U.K. I’m very good at isolation, but even I found it at times a very difficult and testing period. Thankfully, I have a guitar. Life saver. I loved the clean air and lack of crowds. It was an unexpected silver lining. We’re re all back again, destroying the planet as manically as ever sadly.

—Are we going to have a new Gene Loves Jezebel album in the future? What are the plans of the band for the rest of the year?

—We’re doing Sinner’s Day in November, of course, and I’m playing a couple of solo shows in The Beautiful Lake District in November too.

I just did my first four shows since lockdown eased. Two with Fischer Z, one with Spear of Destiny and one with Mark Burgess. It was surreal. I loved it so much.

A new GLJ album is not out of the question. It just takes a little organising.

—Can you finally tour in North America? I saw that you will play in the cruel World festival.

—We’re really looking forward to those massive shows and plan to tour around them. Hopefully, a big tour.

—What can we expect of the band’s concert at Sinner’s Day?

—Something that’ll blow you away. We’re good.

GLJ was one of my fave bands all thru their career… Hated to see the brothers go separate ways after such stellar albums and tours.. but that’s rock n roll and not all that unusual. ‘Josephina’ was a great track with the parts twisting into and around each other in a sublime manner… The magic that existed in so many of their songs. Best of luck J & Co. can’t wait to hear the next fully fleshed out recordings!