In their albums from the eighties, The Cassandra Complex showed us how the music from the future was going to be, but we honored their name not believing them. Today we must admit our mistake as we are already ready to repeat it. We have talked with Rodney Orpheus of a lot of things, among them of videogames. They will be sharing their insanity with us at DarkMad. 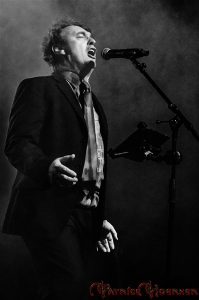 —The Cassandra Complex is based on a Greek tragedy and basically happens when a valid prediction is not believed. Why did you choose such a name?

—Yes, that was always the idea from the beginning. We felt that we were creating something important but that no-one would listen to us, so it was a comment on that. And, of course, a Cassandra Complex is a form of insanity, so it was also a joke against ourselves—that we thought we were creating this incredible new music but maybe we were just crazy for thinking that.

—The Cassandra Complex’s first single was released in 1985, but when exactly was the band formed?

—We were actually playing for at least a couple of years before that. We deliberately waited until we knew we were absolutely ready to release something. And we wanted to do the whole thing ourselves, so we worked hard, saved all our money, and built our own studio and produced everything ourselves.

—The band is from Leeds, together with the Sisters of Mercy, Red Lorry Yellow Lorry, Rose of Avalanche. All of you were sometimes called the Leeds 4, right? Also The Three Johns were there, so how was the scene back in the day in Leeds? Most of the members of the bands were friends, right?

—Nobody called us the Leeds 4—I have no idea where that came from 🙂 It was an amazing scene there at that time. And yes, many of us were friends. Our studio was literally next door to where The Three Johns lived, and my house was in the same street as Wayne Hussey’s.

—How was the interview that Andy Booth made to the band? I guess it must have been very interesting, so you asked him to join The Cassandra Complex.

—Yeah, he was great—he was the first person who really understood us. And he turned out to be an amazing guitarist. He still is.

—You said that your favourite band was Cabaret Voltaire, which period do you like?

—I love pretty much all of their work, but if I had to choose, I’d probably go for the period of transition around when they did Yashar. Their early singles are all amazing, though. 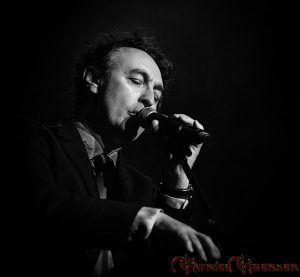 —Don’t you think that it’s a contrast to have James Steward from It’s a wonderful life in a cover of an album called Grenade? Especially if you add the kind of music that you were doing. How do you see the album today?

—I am actually remastering that album for release this week! It still sounds amazing, I am quite surprised at how it has stood the test of time. It’s called Grenade because at the time I was playing a tabletop game called Car Wars and the grenade was the cheapest, but most powerful weapon in the game if you used it right. So since we were making that album with no budget, and completely self-produced, we named it for that. Because we figured it would have an explosive effect. And it did.

—Hello America is a compilation of early singles named after a J.G. Ballard book, how has this influenced you, lyrically? And other writers? William Gibson? The band seems to have a lot of literary influences.

—We read a lot of books 🙂 I’m a big SF nerd and we considered ourselves a cyberpunk band right from the beginning, before the term had even been invented. So yes, we always had a lot of SF literary influences. And TV influences too—the Starship Enterprise is also featured on the cover of Theomania. But I would say that J.G. Ballard was probably the biggest influence when we started. I love his work.

—What happened that during the recording of Theomania from 1987, part of the band left? Was it difficult to create the album? It ended up being one of your classic releases.

—It was absolute hell making that record—because we knew it could be one of the best albums ever made, if only we got it right. And that pressure, plus lots of personal issues that we all had, made things really hard. We had been on tour almost every day for the previous two years and we were physically and psychologically exhausted. 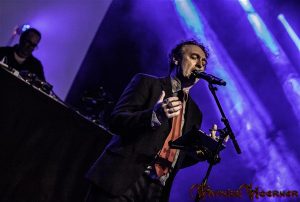 —At this period, there were a lot of bands with a similar electro-rock sound from Ministry to Young Gods o NiN, where you interested in any of them?

—Sure, we love music and listen to it all the time. We played with The Young Gods several times. I love that band so so much!

—Satan, Bugs Bunny and me… the album from 1989 gives us an opportunity to talk about occultism, you are very interested in it, right? Do you think it has influenced in any way the music of the band?

—When we started Paul Dillon and I had financed our first records by working in a famous occult store in Leeds called The Sorcerer’s Apprentice. Then just when I came back to Leeds to make that album that store got firebombed by Christian extremists who said it was “Satanic.” I was extremely angry that my friends and former co-workers could have been killed in the fire, so that album reflected a lot of that anger.

—Another contrast: Cyberpunx was a rock opera. The company did not like the album and you had to change a few things. Can you please tell us more or less how different it was at the beginning? Are you going to release finally your version of the album? Now it should be easier.

—I’ve been looking at remastering that album too, and resequencing it and releasing it the way it was supposed to be. We are currently talking to the record company about that possibility. Otherwise I’ll just make a Spotify playlist and share it with people. Come to think of it, that’s a pretty good idea…

—Do you like Frank Zappa’s Joe Garage? The name of our web is a reference to that album.

—I’m not a Zappa fan, but I do like that album. I listened to it quite a lot as a teenager. 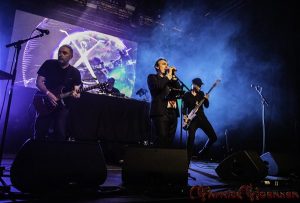 —The War Against Sleep from 1992 has a beautiful name and a bunch of love songs for industrial people. You said that it was very painful to sing some songs during the recording but how was singing them live? How do you feel when you sing some of these songs now?

—That album was written and recorded after I broke up with my long-term girlfriend, and so it reflected that pain and loss I felt at the time. I think it has some of our very best songs on it, but I’ve never been happy with the production. So I’d really like to remaster that one soon too. I do love playing it live now, though. Songs that were so tragic at the time become a kind of celebration later, because you still feel the love and pain, but also you understand that the human spirit can go on and triumph in the end.

—The musical press said that you sold out and gave you poor reviews. Do you think there is a general incapacity to really understand the artists from the press?

—The major music press said we would never last. It turned out that all the magazines that gave us bad reviews didn’t last, and we are still here. That makes me smile 🙂

—Instead, Sex and Death, from 1993, was a return to your previous sound. In this album you included a song called “The War Against Sleep”, did you think it was such a good name that it deserved a song? And what about your cover of Suicide?

—”The War Against Sleep” song was supposed to be on the previous album but we couldn’t get it to sound right, so we left it off in the end and saved it for Sex & Death instead.

We always loved Suicide, and we used to cover their songs all the time, right from our very first shows. But I never wanted to record them, because how do you improve on perfection? Eventually I got to meet Alan Vega and he encouraged me to put our cover on a record. That was a wonderful moment in my life, he was one of my all-time heroes. 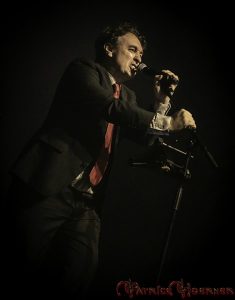 —Wetware from 2000 is your last published album, how do you think that the sound has changed from your first album?

—Wetware was a very clear attempt to look back at all of our previous albums and create a synthesis of all the styles we experimented with. So it’s almost like a “best of CX” record in that sense. I like that album a lot.

—What has the band being doing during these long periods between records?

—We had to stop touring because I became very sick and wasn’t allowed to sing or play for many years. In that period we all took other jobs in the music business: I design music technology, Andy is a successful music business lawyer, Volker works at record labels, and Axel is a very well-known live sound mixer. So we were all very busy in the background even though we were not on stage.

—How are your side projects Sungod and Aurora going?

—Aurora wasn’t my side project, that was a project of Patricia Nigiani. I did produce one of her albums which is a great record and more people should know. Sungod was (and still is) my project and it’s one of the things I am most proud of. I have been thinking of bringing it back sometime in the next year or two, but I am so busy with other things…

—I was really surprised when I read that you are a fan of videogames, I am a localization videogame tester, and I worked on Oblivion and Skyrim. You said that you designed some games, can you tell us more about this?

—When I was ill and stuck at home for months my girlfriend gave me a copy of an RPG called Neverwinter Nights so I could play with her via the Internet. I realised the game had a creator mode, so I built a little RPG world for us to play in (because I couldn’t really do anything else). One evening while we were playing I forgot to password protect my server and another player turned up and asked to play with us. He loved it so much he wanted to ask his friends to come to play too. A few months later it was one of the most popular game servers in the world and won an award. So that’s how I got into games design. I later ended up lecturing in game design in college 🙂

—When are we going to have the long-awaited new Cassandra Complex album?

—We actually have about 20 songs we are working on now…

—What can you tell us of your concerts at Darkmad? How is it going to be?

—For DarkMAD we unfortunately won’t be able to bring all of our big video wall equipment with us but we will be preparing a great show anyway, hopefully. Since 2 of us live in England and the others live in Germany, we will all be flying in via different routes, so we spend a lot of time preparing via the Internet.

You can read more info on Cassandra Complex in this interesting interview on ElektroSpank music magazine.