In 2029, Skynet has almost succeeded in removing music from Earth, but a group of rebels, called the W-Resistance is fighting back. This group of Goths and 80s lovers, has been inspired by the W-Fest celebrated in 2019. Skynet has sent me, a T-8o to that special moment to stop the seed of this rebellion. I arrived at what seemed like the changing room of a gym. Some people were having a shower behind some curtains in the next room. I took a pair of trousers and a T-shirt and went to the festival grounds. First part of the mission: close observation and reports of all the artists. 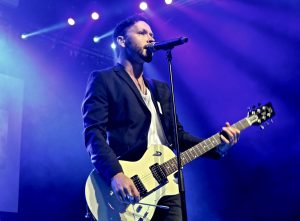 The first band of the day was Sono, a trio with a singer/guitarist and two guys at the synths. It was the birthday of the singer, a famous celebration between Humans. They played a few songs: “Amplify,” “Supersonic” (a track that made people move in a way called dance), and “Let Go.” After these songs, the singer tried humor, saying that he was surprised because people were playing Tetris when he was singing. According to the reaction of the public, he was successful. The band continued with “Flames get Higher,” “All Those City Lights,” a song against immigrants getting drown (an issue that worried people in the 21st century) called “Somewhere beyond the sea,” “Top of the World” and the most famous of their tunes: “Keep Control.” My analysis based on the performance of the band and the reaction of the public was quite positive. 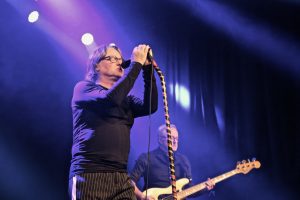 Next was the turn of a Belgian band called Schmutz (German word for dirt, Humans never managed to master binary code, so they needed different languages). The sound of their first songs could be filed under New Wave: “Turn The Pages” or “Life Is A Merry-Go-Round” were played with a lot of energy (although Humans don’t have extra batteries). A considerable number of persons had gathered to see this band, that soon displayed their most pop side with tracks like “Against the Wall,” the famous “Love Games,” “On the Edge” or “Holding On.” They finished their set with “Straight From The Heart.” Our database was missing some information about Belgian groups that this unit managed to compile during the festival. Final analysis: good concert. 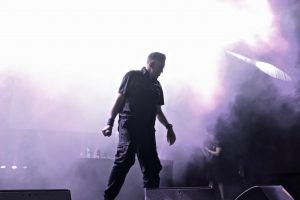 Do androids dream of EBM? The high-voltage music that Portion Control started playing was completely forbidden in 2029 and this was the first time this unit could register it. It sounded like the perfect music to listen to when no task was active. This unit tried to process all the data of this incredible style of music: Dean Piavani sang and shouted restlessly while John Whybrew delivered industrial soundscapes. My electronic body started malfunctioning due to the insistent rhythms of some of the songs they played: “Icon,” “Last of the Breed,” “Hardman,” “Hey Hey,” “Deadstar” and the final “Amnesia.” Data: the sound of the future was in the past. 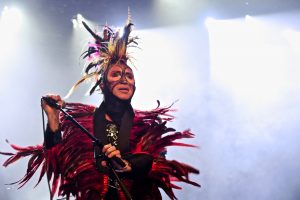 This unit had to scan the band to be completely sure that they were Humans. They started with “Rocking Miss USA,” and continued with “Hey Jayne Mansfield Superstar!” where this T-80 had to check again that the guitar player was Human, because the way he was playing his guitar wasn’t. I compared previous reports of the performance of the band, and this time they exceeded all data registered. The concert went on with the songs “Teenage Thunder,” “Boom Boom Satellite,” “Success,” “Atari Baby” (with a bass that reminded me of another band that it’s included in my database: New Order), and the hits “21st Century Boy” and “Love Missile F1-11.” 40 minutes of concert were not enough for band this good. This unit will need extra data in the future. 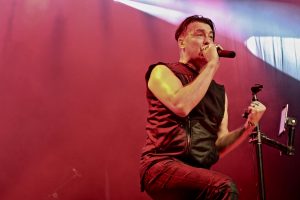 My database said that I was listening again to pure EBM. The band Tyske Ludder, with singer Claus Albers, Olaf A. Reimers at the programming and two drummers got an incredible response from the public (mainly Humans, but some specimens escaped from categorization) from the very beginning. The Spanish guitar in “Bambule” was the only moment of calm during the concert. They dedicated a song to Rutger Hauer an actor famous for portraying an android. Was it a token of friendship towards this unit? They also did a homage to a Belgian band with their cover of TC Matic’s “Oh La La La.” They set also included “Naziss,” “Meskalin” (where the singer wore a Putin mask altought the public always knew who he truly was) and the final hit “Panzer” where one of the drummers took his snare drum to the front of the stage. These individuals need further study from this unit: a 111-unit box set seems the right place to start. Checking Amazon… checking eBay… checking Discogs… 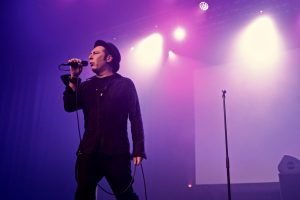 One of the reasons I had been sent to the W-Fest was Psyche. His music was one of the possible inspirations for the rebellion. Together with a keyboard player, Darrin Huss appeared, wearing a T-shirt of Dario Argento’s Opera. He started with “The Quickening,” and played a selection of songs from his albums, including “Uncivilized,” “Youth of Tomorrow” (a very good track from the Maxi from 2017), “Truth or Consequence,” “Angels lies sleeping” and “Misery.” I had to recalibrate my parameters and put this concert as top level in the performance category. Darrin changed outfit for no visible reason before playing “The Brain Collapses” and continued with the cover of Q. Lazzarus’ “Goodbye Horses” and “Unveiling the Secret.” Redefining quality parameters… 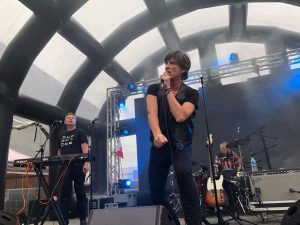 Another objective of my mission was the study of the French coldwave band Little Nemo. But due to some malfunctions, my internal chronometer did not work and I missed the band. This unit only managed to get some pictures and CDs. To see the band live has been classified as priority number one. 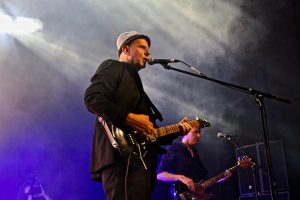 One of the final concerts of the dark wave band Escape with Romeo took place in the W-Fest (although if Skynet plans got ahead, it will be the final gig for everybody). The band started with “Helicopters in The Falling rain” and continued with “Anteroomm for your love,” “Here comes the Night,” “Someone, Somewhere, Someday,” “If Seeing is believing,” “Somebody” (where they reached total accomplishment), “It’s loneliness” and “Tears of Kali” (with some quality synths lines). This unit never understood the meaning of elegance, but it must be something pretty close to this. 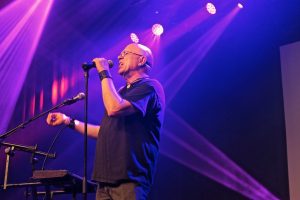 Another of the main targets of the mission was going to appear on stage: Rational Youth. The couple (Tracy Howe plays with his wife called Gaenor) started with “Close to Nature,” “This side of the border” (a track from their last EP, Future Past Tense from 2016), “Money and Blood,” “Western Man” in an electric performance. The electronic sound of the band, with an eighties feel but at the same time with a modern hint, was creating short-circuits in my hips. The last part of the concert consisted in “Dancing on the Berlin Wall” (with a snippet of “Song of Joy”) “Here it comes again,” “Holiday in Bangkok,” “City of the Night,” and “Saturdays in Silesia.” This band worships Goddess Electricity, but Humans should worship them. 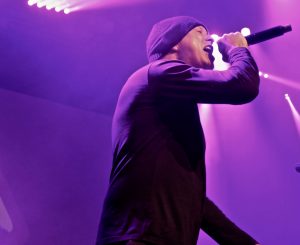 The following band on stage was Mesh. If I had not studied the primitive ways of alimentation of Humans, I would have thought that the band was a power supply charging the batteries of the numerous public. Mesh delivered pure energy in the form of “My Protector,” “Just Leave us alone,” “Runway” and “Leave You Nothing.” The band managed to keep my transistors wide open during all the concerts with tracks like the powerful “From this Height,” “I fall over,” “The Fixer,” “Born to Lie”and “Taken for Granted.” Charge completed. 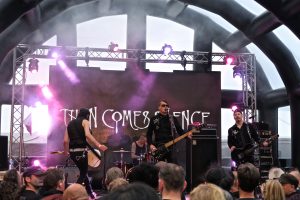 Some technical deficiencies impeded this unit from being in two concerts at the same time. Not having to go to toilets and being fully charged, this unit used the gap of ten minutes between the concerts to see one of the songs of the band. The outside stage was full of people and the band gave a very intense and powerful performance for Humans standars. I have added to my agenda, a time travel at the end of September to Madrid to see the full concert. For the sake of the report, that’s clear. 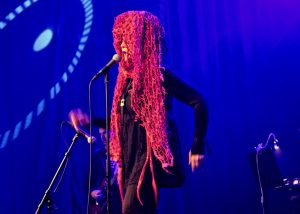 My microphones verified that Lene Lovich was still able of reaching high pitches. Her concert focused on some of her classics like: “Bird song,” “One in a 1.000.000,” “I Think We Are Alone Now,” “Telepathy,” “Lucky Number” and “Home.” The guitar player wore a Napalm Death T-shirt that reminded me of some of Skynet’s first attacks to Humanity. Although Lene Lovich started her career more than 40 years before the festival, her show still was comparable to nothing on my database. 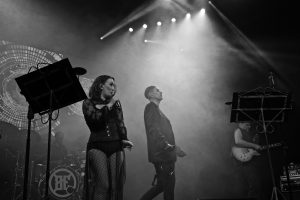 Making references to their name, Blutengel (German for Blood Angel) presented a very visual show where singers Chris Pohl and Ulrike Goldman, managed to bring to life the lyrics and the atmosphere of their music. The band played “Into the Void,” “Teufelswerk,” “Dein Gott,” “Bloody Pleasure,” “Engelsblutt,” “Alles” and a final “You Walked Again.” Vampires were part of Humans’ superstitions but with the music of Blutengel I can understand why people believed in them. 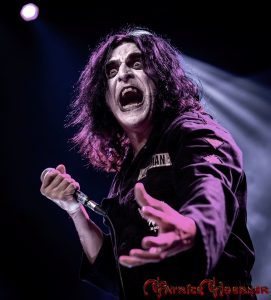 Ten minutes late, Jaz Coleman appeared like a ghost (Humans believed in an afterlife), in front of the biggest crowd of the festival. Closed to him was an original member and bass player Youth (this second stage in life was very important for Humans). The sound of all the concert was powerful, getting close to perfection (if that thing exists between Humans). The band started with “Tomorrow’s World,” “Wardance,” “Eighties” (the only moment a bit commercial, compared to the extreme music that they offered to us). Classics of the band as “Seeing Red,” “Total Invasion,” “Exorcism,” “Pssyche” or “Pandemonium” were played in the most incredible concert that this unit has ever registered. The public was in a state of euphoria that even this unit was starting to feel. 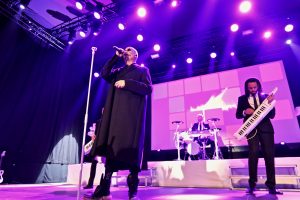 A band with this name would be forbidden in the future without any kind of doubt. Being headliners and with such a name, The Human League was my primary target. They started with “The Sound of Crowd” (and a good crowd of Humans were attending the concert),” Mirron Man” and “Heart Like a Wheel” (my data tells me that hearts are actually shaped in a different way, this must be a Human mistake), “Love Action,” “Seconds” and “The Lebanon.” The choristers sang “One Hand In My Heart”(really played well), and the concert continued with “Human” (clear apology of Humanism), “Tell Me Why,” “(Keep Feeling) Fascination.” Philip Oakey en the choristers changed clothes and played “Don’t You Want Me” (with a long instrumental introduction), in a moment in which I really wanted to be Human. The band left the stage but after a few minutes returned (possibilities they lost something: 50%) to play “Being Boiled” (with an almost industrial beginning) and “Together in Electric Dreams.” For a moment, Humans and this unit dreamed in Electric Dreams. 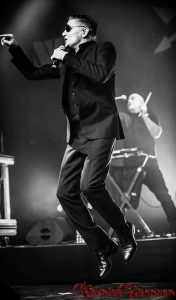 Something in the previous EBM concerts has created problems in my central unit. And now one of the most popular bands of the genre were going to play. The band started with a slower rhythm and mixing all the tracks together, beginning with “Blood Money,” “For Fun” and “Captivate.” The music got faster as the tracks continued. During “Join in the Chant” my database marked again Pure EBM and my electronic body almost got a short-circuit. They continued with their powerful show with classics like “Down On Your Knees,” “Let your Body Learn” and the final “Murderous.”

My second part of the mission started: assignment of primary targets and repression. But after this 13 hours, my data said that Skynet was wrong, that Music was something positive and that W-Fest must thrive. Mission abolished.