Belgian festival Sinner’s Day started this year a Summer edition of three days that took place from the 24th to the 27th of June. Last year, they had already created a special day that served as a preview of W-Fest and featured a one-off concert by Neon Judgement. This year, over three days we were able to see a great selection of the best of the scene and discover some interesting bands. 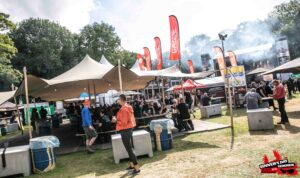 This year’s format, compared to other W-Fests and Sinner’s Day, was definitely the best. The festival took place in a beautiful park, an idyllic location away from the dry wastelands of Amougies. This Summer’s Sinner’s Day had only one main stage and the batcave, the perfect place to be between concerts or when a band that you did not like was playing. There was places to sit and watch the concerts and shade from the sun and the inevitable rain, and plenty of food trucks for the crowds who attended. In terms of organisation, this year was superior: the festival was very clean, with volunteers picking up the few glasses that some absent-minded festival-goers dropped. The toilets were cleaned every time a person entered, something I have honestly never seen before. There was a great punctuality in all the performances and above all, where the festival shone was in terms of sound: powerful and clear. After having been to macro festivals like Primavera Sound, I missed a sound that enveloped me, that filled me. 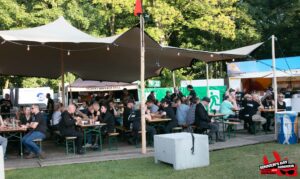 The festival suffered from the problem of this time: the cancelations from Covid, so The Danse Society had to stay at home. It was the most important loss, together with Test Dept, who had to cancel due to personal issues. It’s a problem, which to a greater or lesser extent has happened to all the festivals we’ve been to and we hope it will soon stop happening. Instead we had a good representation of new bands which we mostly enjoyed. Now we tell you in detail how the three days went.

Sadly we missed Ultra Sunn, because we didn’t get to the station in time to catch the good train that would have taken us to Ostend on time. This year we discovered that moving by train is quicker, cheaper and more relaxing than renting a car, so our trip in these respects was much improved.

We arrived in time to drop our stuff off at the hotel, which was about fifteen/twenty minutes from the festival, and get in a bit before the second concert started. We greeted the nice guys from Ultra Sunn, had a look at the record stand and found that the venue wasn’t particularly big and that you could see the concerts very well from anywhere. 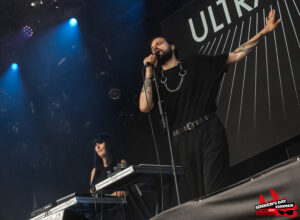 The first concert of the day was by HI-NRG pioneer Trans-X. Pascal Languirand appeared with Luana Viana by his side playing bass and asked us if we were ready to listen to some Trance music. As the sun timidly came out, they played their tracks which mixed the hard beats of the popular nineties style with the classic Hi-NRG melodies. Among others, we danced to a new song called “Heaven” which mixed the two universes quite well and the classic “Living on Video” in which Luana left the bass and danced during the song. They said goodbye with their hit “I want to be with you”. 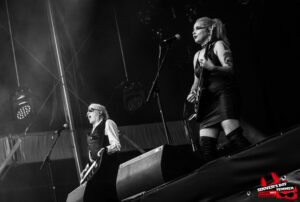 The next band showed a great sense of humour by playing “Living on Video during the soundcheck. But well, that’s where the humour ended, and Atmosphere came out in earnest to tackle the Joy Division tunes. The line-up featured two guitarists and a keyboard player, which gave a different feel to the songs of the quartet from Manchester, as not all of them used this instrument. They opened with “She Lost Control”, followed by “Something Must Break”, “Isolation”… all well played and with special emphasis on atmospheres as the name of the band indicated. “Decades”, “Shadowplay” and “Disorder” were also played, and suddenly, it started to rain a bit. Evidently the weather was too sunny for Ian Curtis’ music. They finished with the atmospheric “New Dawn Fades”, “Transmission” and the final and mythical “Love Will Tear us Apart”. 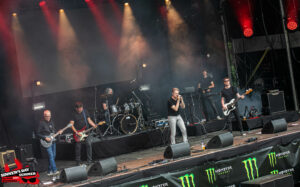 Algiers are for us one of the most interesting bands of the moment and we were looking forward to seeing them live again. The band spent the rest of the days at the festival seeing concerts and it wasn’t difficult to find some of them enjoying a performance. I got the impression that they were quite friendly and approachable people, from what I could see in their interactions with the audience. Lee Tesche, the guitarist didn’t play this time with them and they brought a substitute. But well, let’s talk about their concert: they started with “Walk like a Panther” with the guitarist playing with a bow. In “Cry of the Martyrs” we saw a Franklin whose performance was really impressive, undoubtedly one of the highlights of the concert together with the keyboard player, Ryan Mahn who this time took the bass and showed a great energy during the whole concert. They continued with “The Underside of Power”, another of the great moments of the concert. “Dispossession” was another great song that left us with our eyes wide open. It was a great concert, the only negative thing I can point out, apart from the fact that it was short, is that they didn’t play “Black Eunuch”. 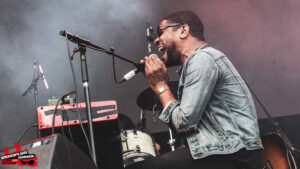 I almost missed Torul because I confused them with another band (my head is not what it used to be), and I would have regretted it because they were quite good. They are a trio who released their first single in ’99 and have since then released several albums. Among other songs, they played the powerful and danceable “All”, “Show me your city”,  but also they made some jokes about the continuous change of seasons every fifteen minutes that we experienced that day, as the sun was rising as soon as it started to sparkle. Difficult to kill” was presented as a summer song, which was followed by “Resonate”, a more commercial and danceable song. They finished with two songs from their upcoming album. Not bad at all. 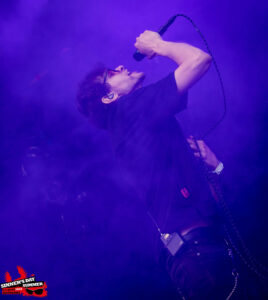 Depeche Mode tribute band Forced to Mode were next. The good thing about these bands is that they don’t have to play tracks from bad albums and their setlist is usually every fan’s golden dream. On the downside, well, they’re not the originals.

On Forced to Mode we can say that the singer really nailed Gahan‘s voice, but the attitude was a bit lacking. While Dave Gahan looks like a tough badass, it seems that this guy was singing to teenage girls, which doesn’t really fit with the mood of some of the band’s songs either. They started with “Shake The Disease”, dedicated a few words to the recently deceased Andy Fletcher, and followed with great classics like “World in My Eyes”, “Master and Servants” and “A Question of Time” which was one of the best moments with the singer spinning around on himself. The keyboardist took Martin Gore’s role for an emotional “Somebody” which followed the classic “Stripped”. The guitarist was the star of the next moment as he played the opening riff of “Personal Jesus” which was followed by the band and the devoted audience. On “Enjoy The Silence” the mobiles were raised with the light on in memory of Fletcher, and they finished with “Never Let Me Down Again”. Not bad at all. 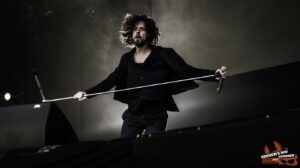 The big surprise of the festival, at least for me, was the Manchester quintet W. H. Lung, already with two albums recorded. Amongst their many attractions, I would highlight a funny singer who was the centre of attention during the whole concert, together with the also very funny bass player who contrasted with the seriousness of the guitar and keyboard player. They played the best of their still short discography with songs like “Want”, “Nothing is”, the krautrock of “Second Death of my face”, the powerful “Somebody like”, the great moment of “Showstopper” which was sung as a duet with the keyboard player and the final “Inspiration!” This song, the singer said, was the first one they had ever written. They acknowledged that this was the first Goth festival they played at and from the success they had, I guess it won’t be the last. 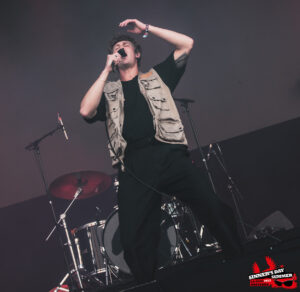 Another great concert was that of IAMX, who performed with modular synthesizers and with the visual support of a manga-like video. At all times he gave a great show with his movements while his performance was impeccable, resulting in one of the concerts of the day. After a more experimental intro, he started with “Xailor”, the heartfelt “After every Party I die”, with his operatic vocals, some more intrumental songs, (Art Bleeds Money) “President”, “No maker made me” and the powerful beats of “Nightlife”. He surprised us with a very modern production, and with a show of ten. 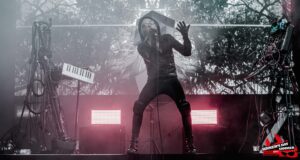 And we continued with two bands that we like a lot. First one of the fathers of Goth rock: The Mission who started in the best possible way with “Beyond the Pale”. Wayne Hussey came out with his eternal twelve string guitars and showed that his voice is still pretty good. They followed with “Hands Across the Ocean” and their cover of Neil Young‘s “Like a Hurricane”. Shortly afterwards it was time for their classics that started with the immortal “Severina”, the tenderness of “Butterfly on a Wheel” in which the audience chanted the chorus. “Wasteland” with its magnificent guitars, “Tower of Strength” and its guitar solos and the final “Deliverance” in which the band started to leave until Wayne was left alone singing the chorus with the drummer. He stopped and grabbed a bottle of wine, took a sip and threw it to the audience. If they had played an hour longer, we wouldn’t have minded. 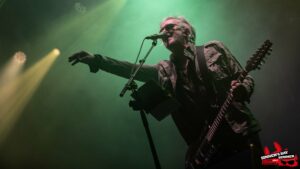 Echo and the Bunnymen had one of the best sounds of the festival, overall excellent, and Will Sergeant’s guitar playing sounded great. “Going Up” was a fantastic started and after that, they never low the intensity, thanks to a blistering setlist: “All that Jazz” and its amazing guitars, a powerful “Rescue”, “Bring on the Dancing Horses” and “Seven Seas”. Ian seemed more at ease than usual and repeatedly asked the audience to sing along. They followed with “Bedbugs and Ballyhood”, “Nothing last forever”, with a very passionate Ian and a snippet of “Walk on the Wild Side”, a longer “Lips like sugar”, and a tremendous encore with “The Cutter” and “The Killing Moon”. Fantastic. 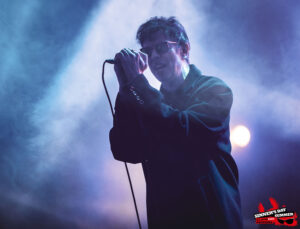