Our five days in Sinner’s Day Special/W-Fest were not only a return to the happy eighties but also to a time when there was no Covid. After showing our vaccination cards, we entered a new old world without face masks and social distancing, that, for a time, we thought it would never come back. The beach at Ostend looked black for a day thanks to the public who came to the Sinner’s Day Special, preview of the festival that is going to take place on the last weekend of October.

Due to a delay in our trip, we missed The Names and Pesch. We were not expecting so much traffic (specially at the exit of Gent) and we arrived at our hotel around one hour and a half later of what we planned. I think that we will have another chance to see such an interesting new project as Pesch, but we were really sorry for not seeing The Names as we don’t know if we will have another opportunity. Well, at least we arrived safe and had five days full of music before us. We had enough time to have a look at the merch and records shops and find where the toilets were placed.

the obsCURE, a The Cure’s tribute band, whose leader is Dirk Vreys, also singer of the very interesting post-punk act A Slice of Life played what was our first concert in the sands of Ostend. Dirk, a healthy Robert Smith, has his young son as his Simon Gallup. They started with “Shake Dog Shake,” followed by classics such as “Primary,” “Charlotte Sometimes” and the intense “The Hanging Garden.” The concert, which was mainly based on the album Concert (The Cure live) from 1984, continued with “The Walk,” “One Hundred Years” (one of my favorite songs), and the final “Killing an Arab” (with the same young energy of the original) and “The Forest.” During the instrumental part of this song, Dirk kissed the full band. The question I had during the concert was: should a The Cure tribute band play also three hours? I can’t answer but I must confess that I really enjoyed the 50 minutes of the obsCURE. 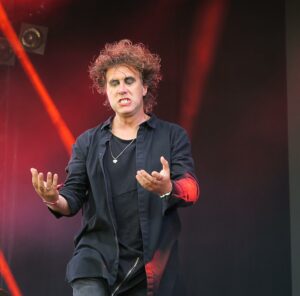 Ramkot, a hard rock Belgian band that has been compared to Royal Blood (just saying so you get an idea of their sound, although I found them harder), were, honestly a strange choice for the day, as their style and even look was quite different from the rest of bands. They have won a new band contest called Nieuwe Lichting and are a three-piece where the singing is done mainly by the bassist but a couple of songs were sung by the guitar player (with a less commercial voice that I enjoyed more). I haven’t listened to metal/hard rock for a really long time and it’s difficult for me to really evaluate what I saw. They played with a lot of energy and enthusiasm and part of the public seemed to enjoy it. Among the tracks they played, let’s point out “King of the Harmless” from their debut EP. 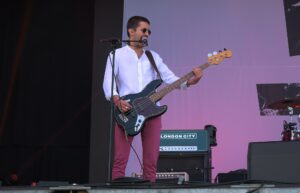 Stijn Meuris, was doing the introductions of every band, but we will talk more about him in our chronicle of W-Fest. With the next concert, an incredible streak of good gigs was starting. The first of them was by Suicide Commando that started with “Gates of Oblivion” with a powerful entrance and amazing energy. From there, they chained classic after classic such as “God is in the Rain,” “Euthanasia” and”Cause of death: suicide” in which Johan Van Roy played a small drum. In “Love Breeds Suicide” we were amazed by the power of the drummer and the impacting visuals. The spectacle continued with the awesome”Hellraiser,” and the final “Die Motherfucker Die.” Johan Van Roy is still a spectacular front-man, the band plays with a lot of energy and the setlist was just perfect. 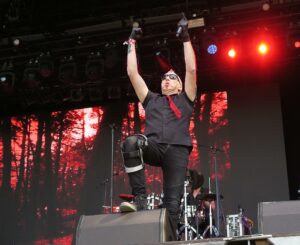 Belgian band Whispering Sons has grown a lot in the last years, both commercially but also in terms of quality. It’s difficult to believe that only three years ago, in 2018, they were playing in a very small venue in Madrid. And now they are one of the headliners of DarkMad, one of the two main dark festivals in Spain. Fenne is quite impressing, both for her way of singing and the magnetism she has. And the rest of the band is really good, especially the guitar player that played some great riffs. They started with “Dead End” and they already captivated us. It’s quite remarkable that they already have a very solid setlist with only two albums released. “Got a light” gave us the goosebumps, but also the guitars of “Alone,” the powerful “Vision,” “Surface” and the final “Waste.” Breathtaking. 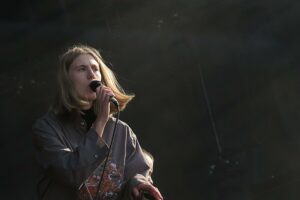 El Garaje is what it is due to a series of circumstances that started with a concert of The Young Gods in a small Italian festival. There, we bought the tickets for our first W-Fest, and coming to this festival motivated us to dedicate all this magazine to the Goth culture. So seeing them in W-Fest was a kind of closing the circle. The set, in this occasion included some songs of their last album Data Mirage Tangram so, they did not play all their classics. And that, at least for me, who has seen the band a few times, was OK, as I wanted something different. The first 35 minutes consisted of only four new songs: “Comme C’Etait La Dernière Fois” (with only Cesare Pizzi and Franz Treichler on stage), and there from their new album, “Figure sans nom” (where the drummer joined), the powerful “Tear the Red Sky” (a track U2 would kill for) and “All my Skin Standing” (with an atmospheric beginning that got us ready for the electric storm that came later). They continued with “About Time,” their version of Kurt Weill’s “September Song,” another intense moment with “Envoyé,” “Night Dance” and an amazing “Kissing the sun.” Another concert to remember. 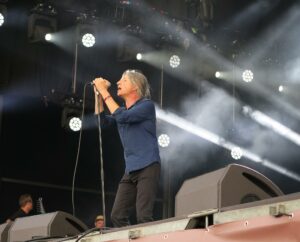 And now it was the turn of one of future pop most important bands: VNV Nation who gave another great concerts with the most emotive moments of the night. They have a lot of great tracks so when they have a one-hour slot, they never play fillers. From the solemn “Legion” to the powerful “Chrome,” but also “Further Star,” the classic “Illusion,” “What’s the future?”, a danceable “Immersed,” “Control,” “Nova” and “All or sins.” Ronan Harris sang as well as ever and with such a setlist it’s difficult to give a bad concert. We had four really good concerts in a row and there were two more coming. 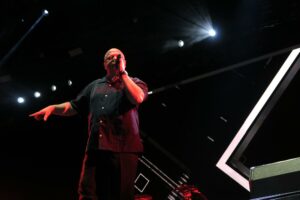 Finally, one of the most awaited concerts of the night arrived. Everybody was waiting for Front 242 as for most of us it was the first chance of listening to some of their new songs. The legendary EBM band managed to do something really difficult and gave us the best show of the night, in my opinion. From the very beginning, both Richard 23 and Jean-Luc De Meyer proved to have an incredible energy. The storm started with “First in/First out,” “Take One,” “Don’t Crush,” “Funkahdafi” (during this song we saw Ronan Harris, not very far from us, taking a vid). After this, we had one of their new tracks and more classics: “Quite Unusual,” “Soul Manager,” “Commando Mix” and “U-Men.” The band played a new track, sang by Richard with a sound that we could describe as 100% Front 242. People became crazy with “Headhunter” at the same time that a few drops of rain started to fall, only to make the moment more special. After “Modalvia,” the end of the concert came with “Welcome to Paradise.” Impressive. 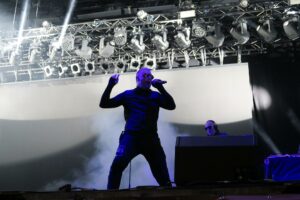 Things are never perfect, and The Neon Judgement’s concert as good as we expected. The expectations were very high, it’s true, as TNJ is a band that we love. And we enjoyed the concert, it’s true, but it wasn’t that special. They started with “Factory Walk,” with Dirk at the machines and TB with his guitar. The song kept all its classic industrial power. TB sang “Sue Sister” and they continued with a nice “Too Cold To Breathe.” Some technical problems in “Fashion Party,” prevented TB from singing it as his guitar was not working. The track continued only with the electronic part and a final declamation from TB. They continued with “The Man” and “Awful Day,” a danceable “Tomorrow In the Papers,” and “Miss Brown” in which the son of TB played with the duo. The rest of the concert oscillated between the edgy guitars of “Voodoo Nippefield” and the electronic of “Concrete.” For the end, two of their classic: “Chinese Black” y “TV Treated” that were quite well played. We hope to see then live again in the future because as Leonard Cohen used to sing: “Hey, that’s no way of saying goodbye.” 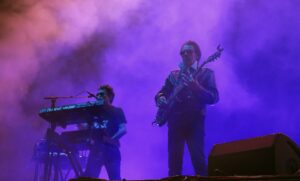