The sun came up on the last day of the festival and we were a bit tired after seeing so many concerts in the two previous days. Altought it was, undoubtely, worth it. During the morning we had the precious help of one of our favorite musicians, Jean-Marc Lederman, who brought some humour to my notes. It was the day with more musical diversity and that was the cause that sometimes it was difficult to connect with all the proposals.

British legendary bass player Jah Wobble became famous thanks to his incredible work in the first albums of PIL. After leaving the band, he released numerous albums of almost every possible style, always surrounded by some of the best musicians ever, such as Brian Eno, Bill Laswell, Diamanda Galas and ex-Can Jaki Liebezeit and Holger Czukay. For the concert, he came with three other musicians, alternating the singing with the drummer. He played two songs of PIL, a curious version of “Public Image” and “Poptones”, one of the tracks where his bass playing standed out. Also, we listened to some of his hits such as “Becoming More Like God”, a bit of old-good dub (with jazz notes), he played some solo and proved that jazz fusion can also be good. Was it a good concert? I would say yes, but I must confess that I’m not really objective, because if there is something like a Jah Wobble fan in the world, I should be included in that category. 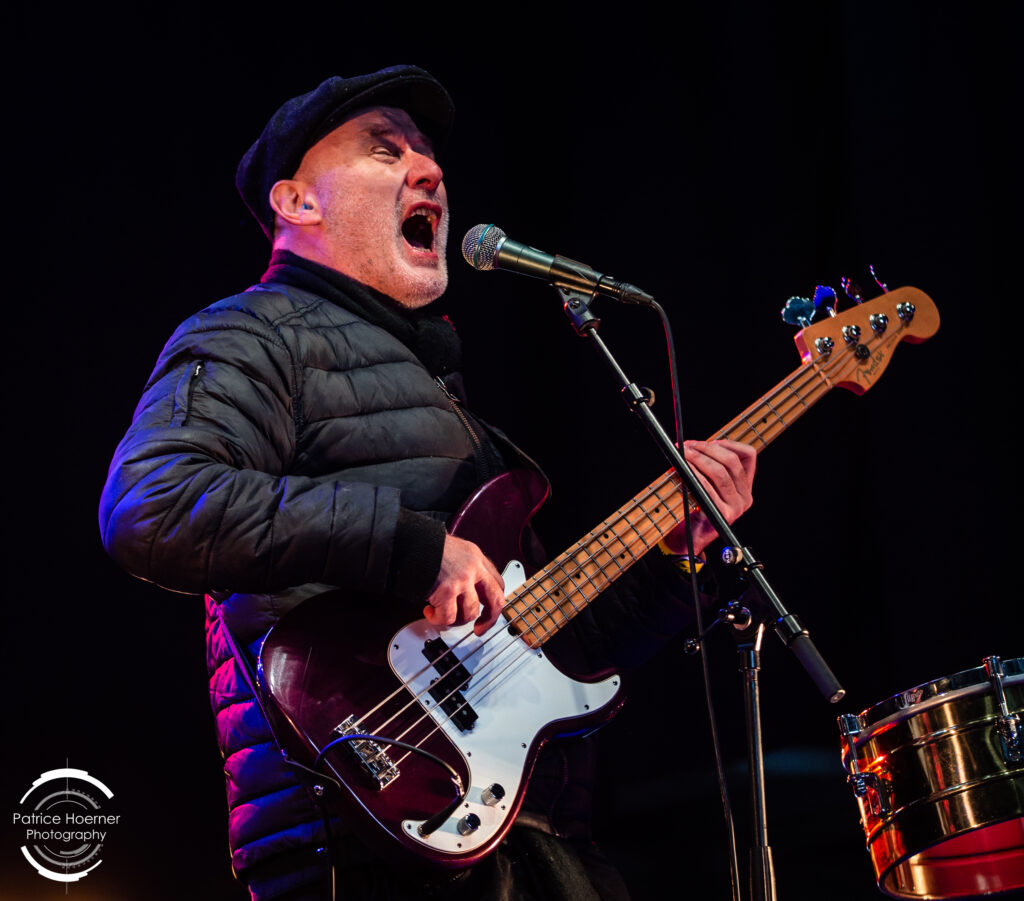 Texan darkwave duo Twin Tribes is, without any doubt, one of the bands with bigger projection of the moment and we would like to remind you that it was a Spanish label, Dead Wax, owned by our friend Nico, the first one that released their material. They proved to have some a good bunch of hits in the form of the powerful “Shadow”, “The Vessel”, “Heart and Feathers”, “The River” (one of their best tracks) “Portal into the void”, “Tower of Glass”, “VII” or “Fantasmas”. A big thumbs up. 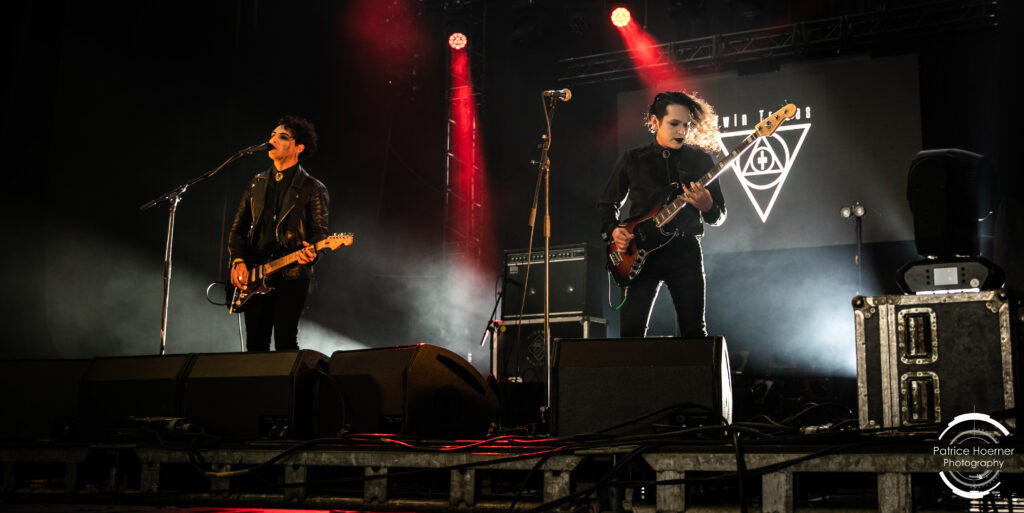 It was the only concert that we could not see complete. O Veux is a five-piece rock band that was in charge of opening the Belgian stage. 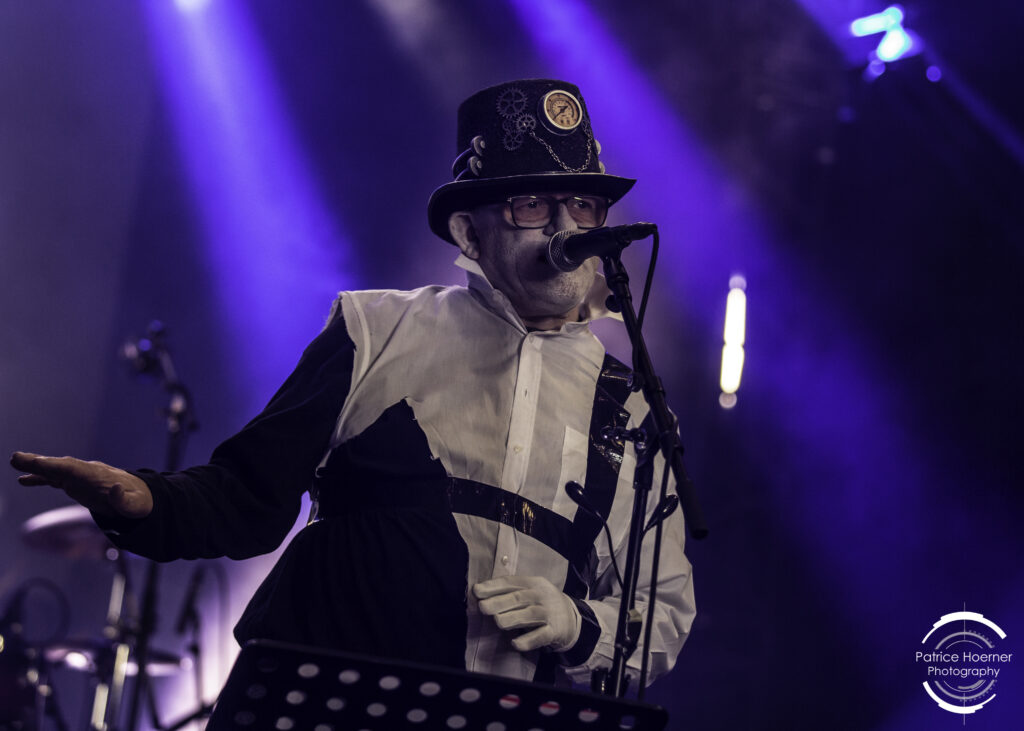 If you are a Goth that has grown up in the eighties, to go to a concert of Gene Loves Jezebel, should  be one of your must do. Jay Aston’s band appeared on the main stage with their usual four piece formation and gave us a glimpse of their reportoire. From the powerful beginning with “Twenty Killer Hurts”, “Sweet Pain”, the emotive song “How Do You Say Goodbye (To Someone You Love) (from their Dance Underwater), “Flying”, “Cow”, the rock n roll of “Jealous”, “Motion of Love” (another of the best moments of the festival ) and the final and awaited “Desire”. Later we could say hello to Jay and noticed that he managed to keep the look and the charisma he had in the 80s. 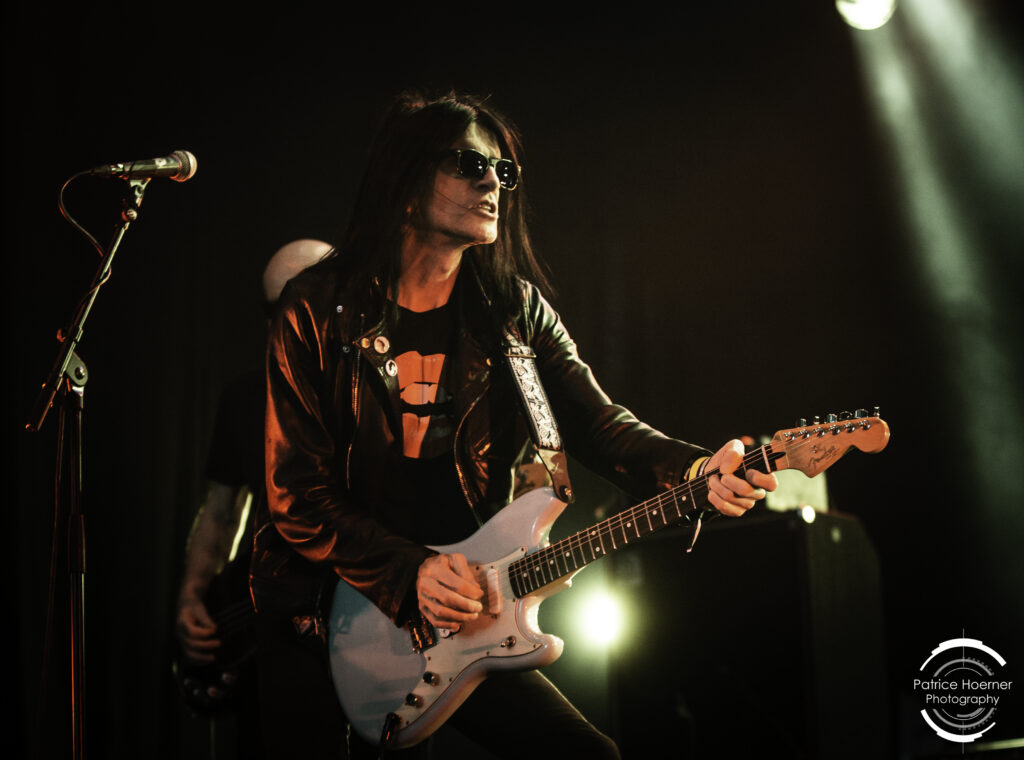 Dead High Wire is a young three-piece Belgian Goth rock/post-punk band that made their debut in 2018 with Pray For Us, whose title song was played during the concert. This year, they have released a couple of singles, one of the them, “Hide”, was recorded during the concert and uploaded to YouTube. There,  you can see the Garaje crew eating their lunch in the foreground. The band showed the intensity you can expect in this kind of bands and in general it was a quite good concert. 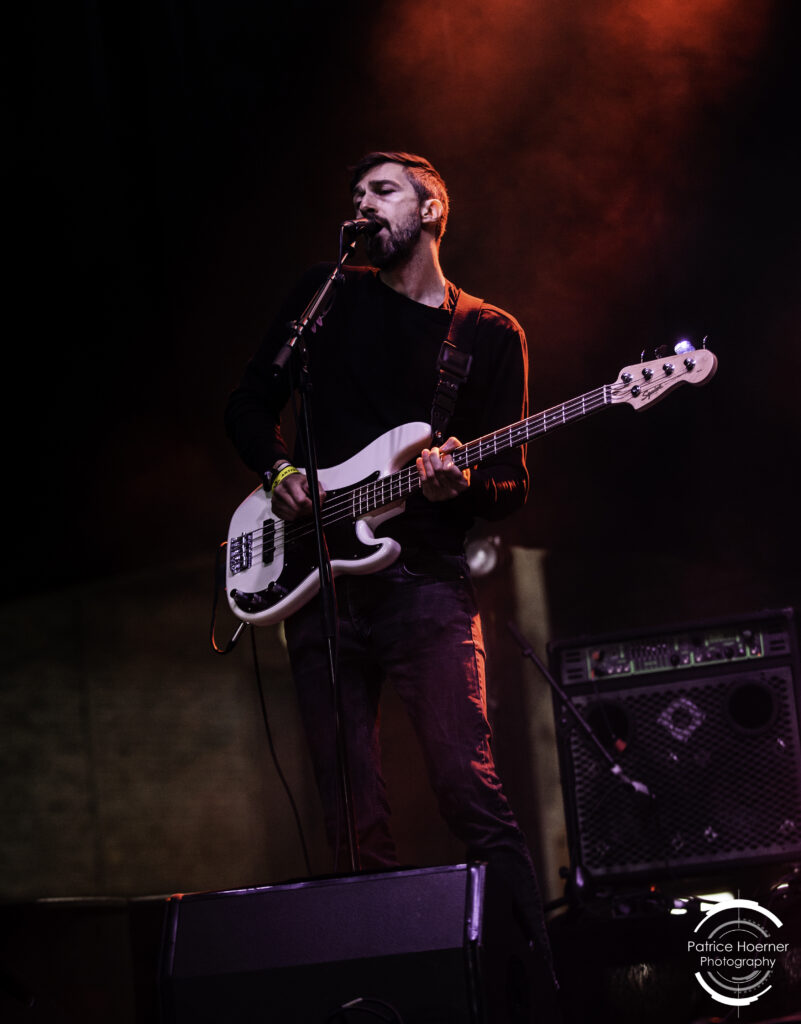 It doesn’t matter how many times I see darkwave duo She Past Away, I can’t manage to remember the name of their songs. I guess I should learn some basic Turkish to do it. Even like this, Vio told me that they played “Asimilasyon”, “Ritüel” and the hit “Disko Anksiyete”. There were a lot of people to see them and it was, as usual, a good concert. 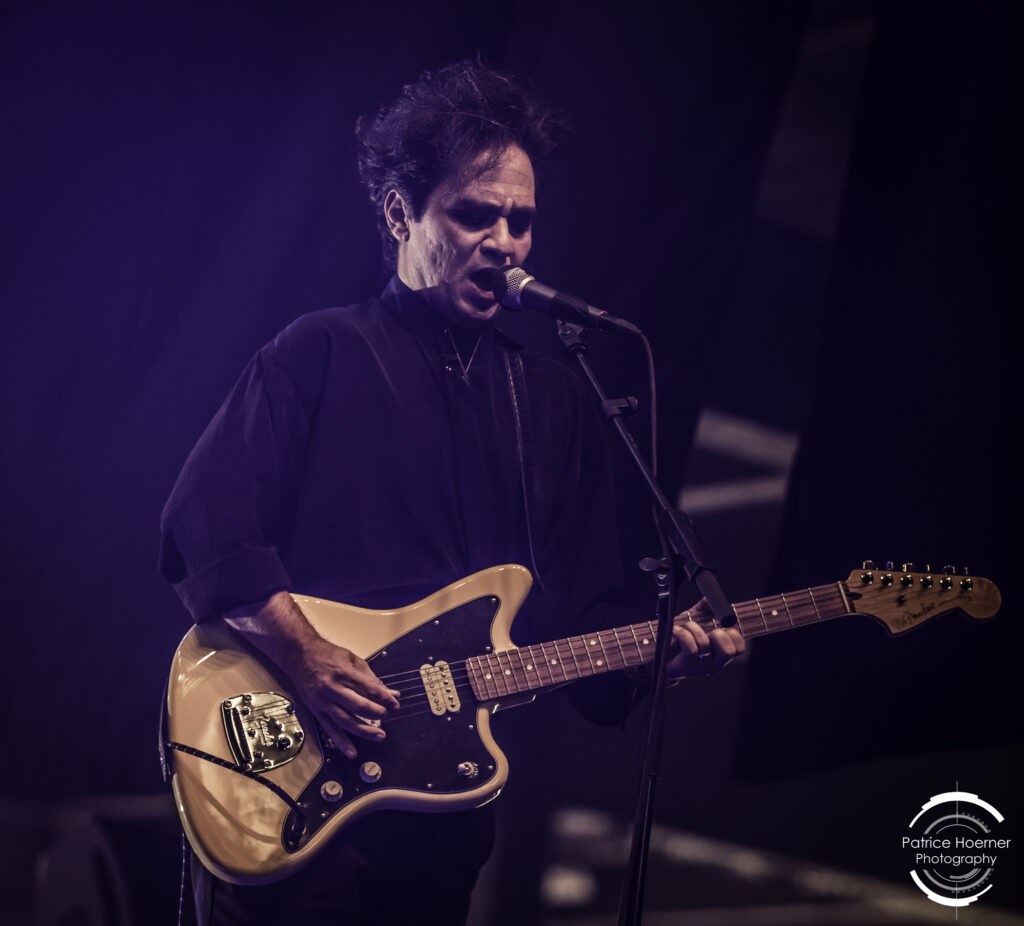 I must confess that the stuff like Epica/Nightwish is the further you can go from my tastes, but it’s also true that the Belgian five-piece symphonic metal band Solitude Within were not bad at all. This young and hard-worker band, in which we would like to highlight the work of the singer, played some tracks from their album of  2017 Disappear, like the title song and the final “Fade Away”.

When I was 17-18, I had a friend that with whom I was exchanging cds and cassettes of eigthies commercial pop, and one of the bands he always spoke about was Then Jerico. But he never lend me any of their albums and instead thanks to him I listened for the first time to artists such as Sandra or Chesney Hawkes. And it’s a shame because I think I would have enjoyed their music: quality and very catchy commercial pop. Live, it’s the singer Mark Shaw who steals the show:  he is quite a frontman and made a lot of funny remarks during the concert. We could hear “Helpless”, “What does it take?”, “Muscle Deep”, all of them played with a lot of energy and actitude. They played also “Darkest Hour”, a ballad where the singer could show his strengths, the hit “Big Area”, “The Motive” and “Reeling”. Way better than expected. 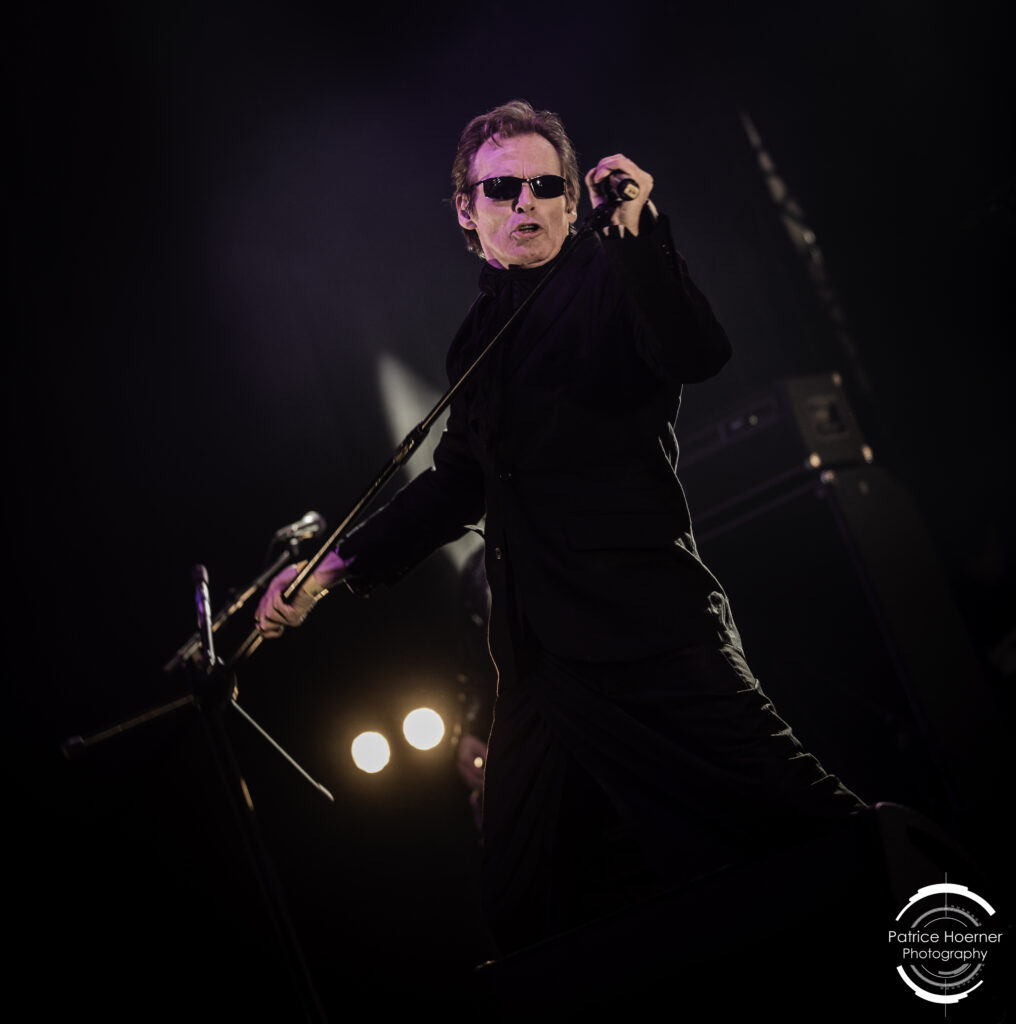 The name of this Belgian band, Frozen Nation, could describe perfectly the audience of the festival after two long days as we were starting to feel the combination of tireness and cold. At least, we managed to warm a bit with this fun group and their danceable tunes. They played the songs of their debut Dark Belgian Disco whose name simply define them. After “The Last fight of Hector” we could hear the title track, a cover of  “The Model”, “I Failed for you”, and “Give Me the perfect song”, one of their best compositions. Without any doubt the concert increased in intensity song after song until the climatic ending. 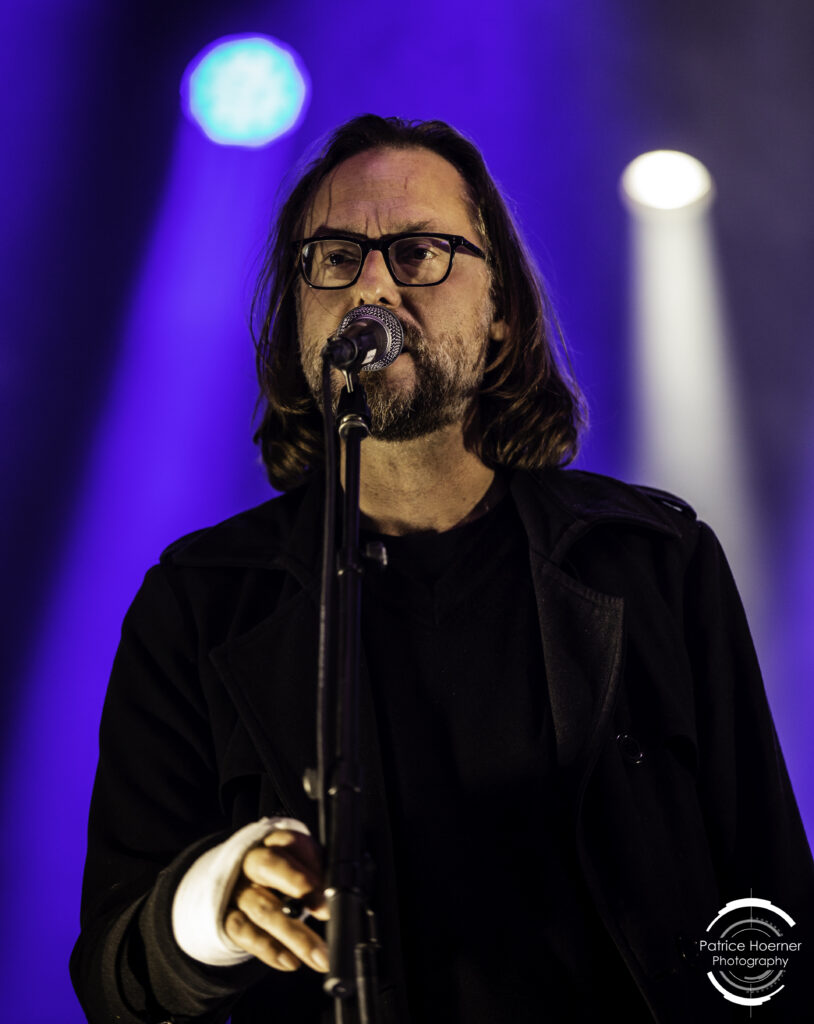 Without being special fans of the band, I have seen classic punk rockers UK Subs, a few times in my live and I have enjoyed all of them. They played a compact setlist that they know perfectly where we would like to point out tracks such as “Warhead”, “Riot” and the classics “Stranglehold” and “Down in the farm”. An infalible band. 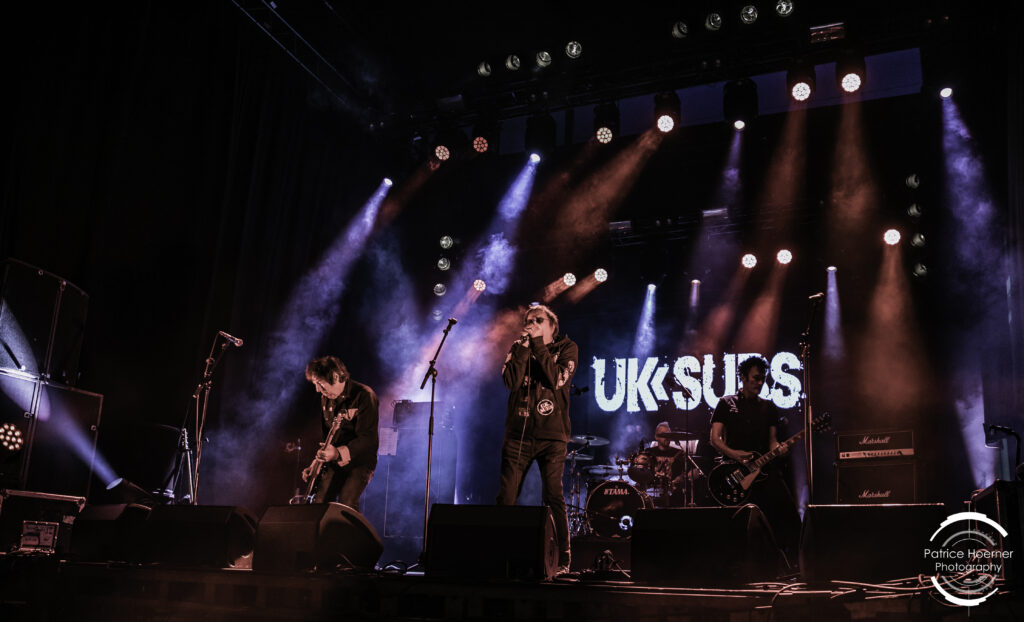 We interviewed Belgian post-punk act AstraSonic a few years ago, but it wasn’t until last September that the bass player of the band gave me a copy of their only album Passengers that I fell in love wih the music of the band. I really liked the songs of the album and I was looking forward to seeing them live. They played some of their tracks, such as “Hollow”, a new one entitled “When Angel Cries”, “Precious Silence” with its incredible atmosphere and the great “Sunset”.  Overall, a really good concert of a band that we would like to recommend to you. 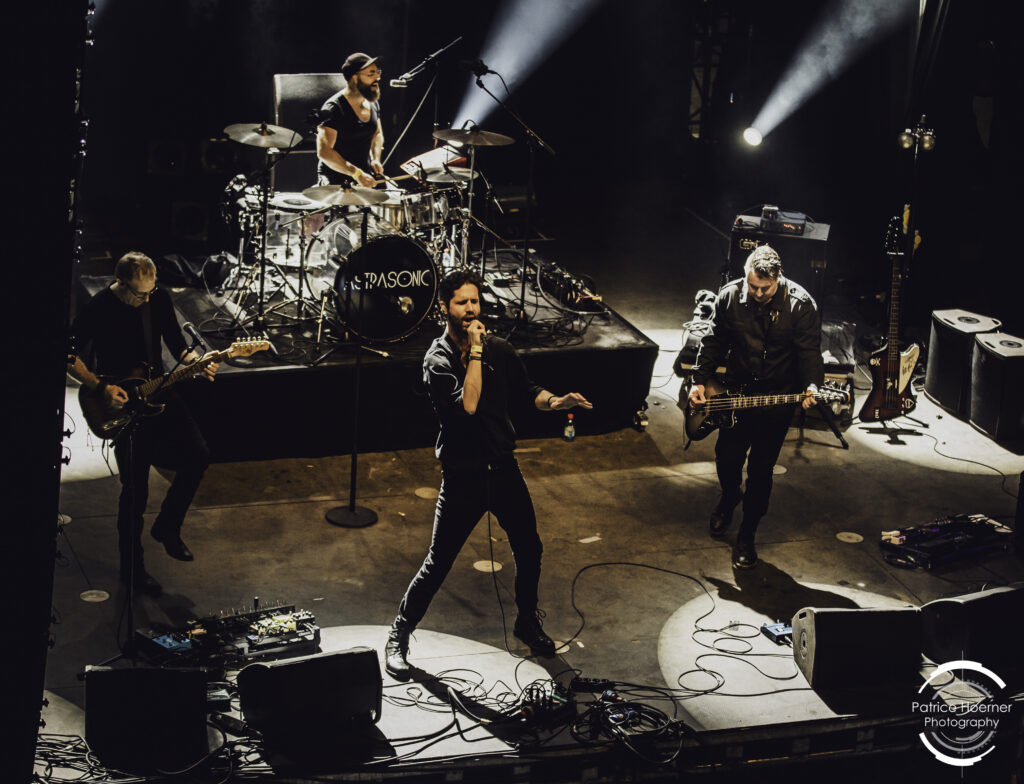 La Muerte gave one of the best concerts of the festival and probably the best of the day. We had a lot of screaming, guitar riffs and B-serie stuff. The five-piece appeared surrounded by inverted crosses and with Marc Du Marais masked during the full conciert. Any track to point out? “She did it for lust” and its bodage video. Incredible. 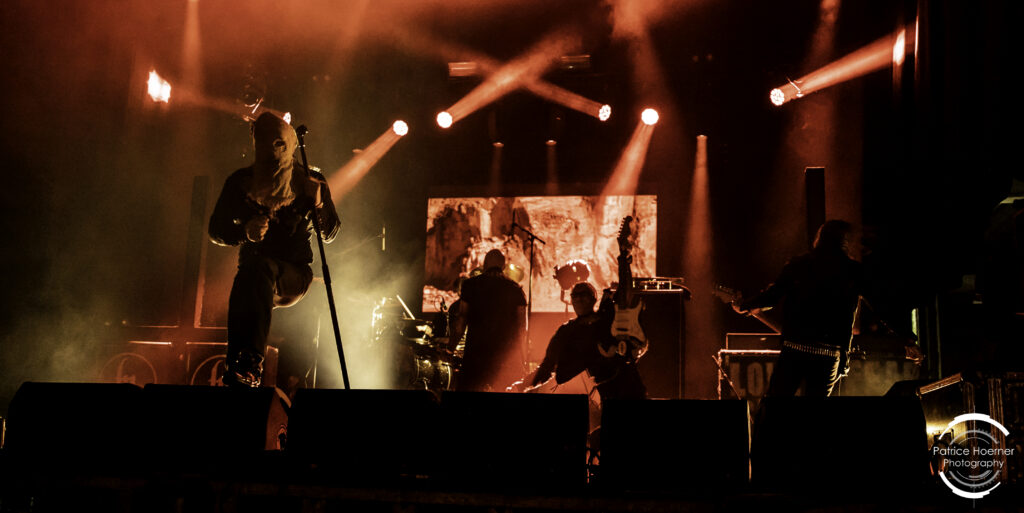 Ground Nero is a well-known Belgian band that was presenting their new singer, who by the way is Mark Sayles from Mark E Moon. Sincerely, we are more familiar with the music of the band from Isle of Man that the Belgian band so we wanted to see what was the result. They played a quite remarkable gig, with a emotive moment when the singer dedicated “In the Blood” to his brother, who was at the hospital. The concert finished with “Heaven Sent” and overall we liked the result. 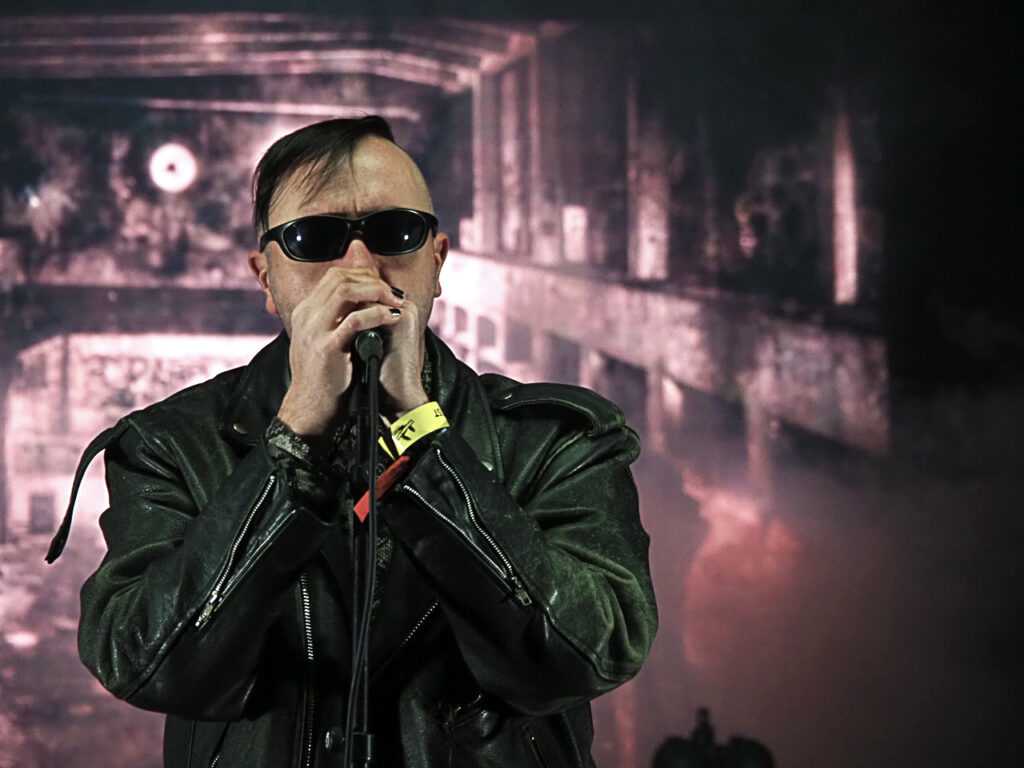 Before talking about Wildhoney‘s dj set I would like to make a stop to write a few words about the Batcave. In the previous Sinner’s day festival it was a big tent where people could enjoy some of their favorite songs. It was a perfect place to visit when the band that was playing was not very much of your taste, but as the DJ told us, the public of Sinner’s Day is so passionate of these sounds that there are a lot of people who come to the festival only for this reason. This year, there was no too much space and a caravan-looking dj booth where djs were playing. Despite this, the stage was always full of dark music lovers who wanted to dance a bit.

And talking about Wildhoney‘s set, we could listen to tracks such as”Dance or Die” from the artist with the same name, “Der Amboss” from our dear Client, “1982” by Miss Kittin and the Hacker and the fantastic “Awful Day” of The Neon Judgement and “Colonial Discharge” from A Split-Second. The audience danced during all the set and even the dj sang and enjoyed it a lot, as we could see while he played the legendary “Closer” by Nine Inch Nails. We hope that we will be able to enjoy more the Batcave in the future. 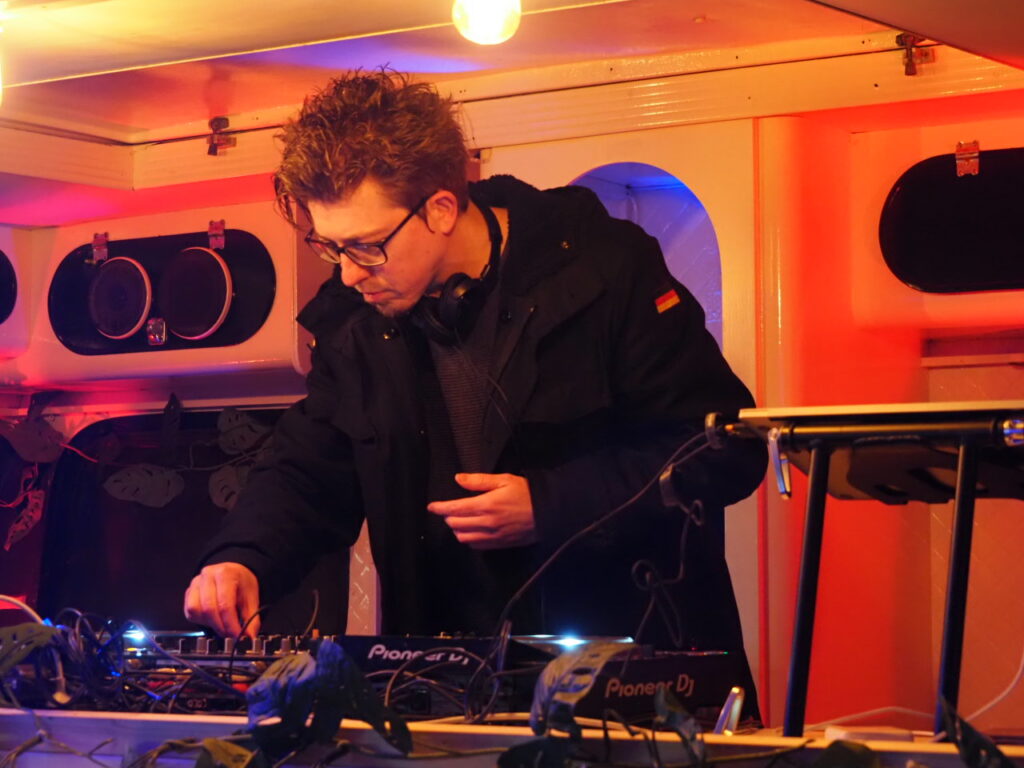 Swedish act Agent Side Grinder started with the adecuate “In from the Cold”, and played some hits such as”Inner Noises”, their cover of Absolute Body Control‘s “Love at First Sigh”, “Mag 7” with a great instrumental interlude, “Giants Fall” that reminded me of the sound of The Normal, “This is us”, or “Into The wild”, one of their more danceable tracks. Too short.

With classic Belgian band The Arch, we discovered that the sound of that stage was better at the left and we really noticed the difference. The singer Gerd Van Geel surprised as a great singer and showman. The band played some tracks from their last album, that we bought after the conciert, like “Cock Populi” dedicated to the bass player of Star Industry. We heard also their classic “Babsi ist Tot”, “Ribdancer, Eyes” and “Wide Open” . Really, really good. 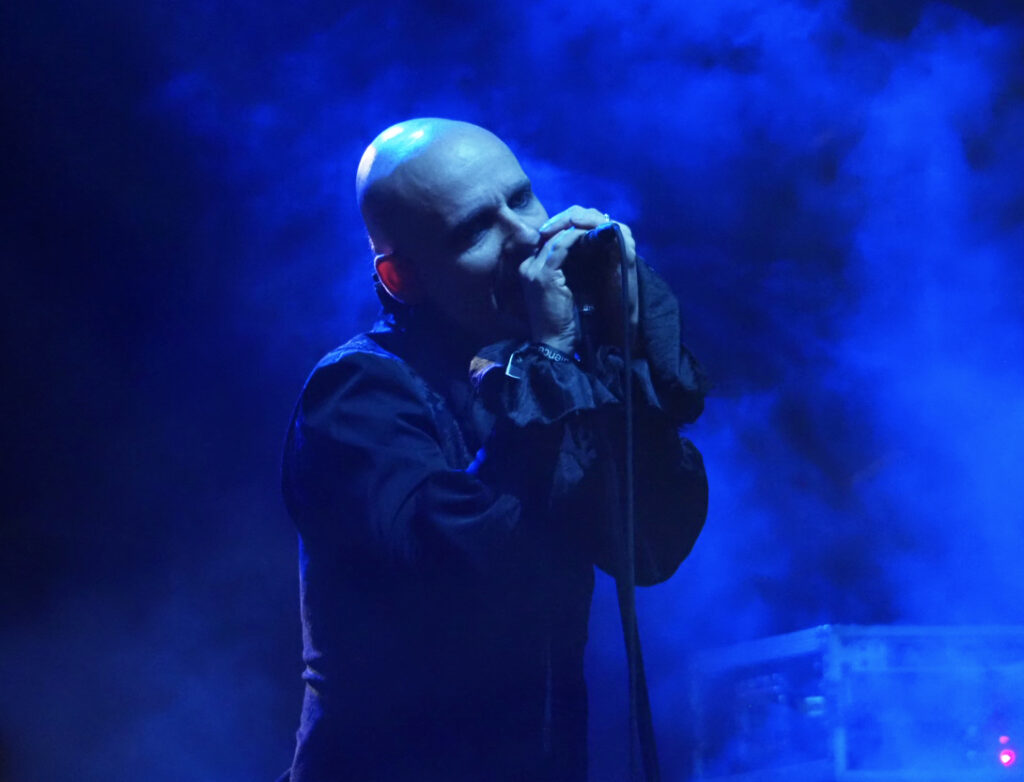 A numerous crowd gathered to see classic darkwave band Clan of Xymox. They started with the long intro of “Stranger” and continued with “Your Kiss”. We had a good selection of the best of the band: “Jasmin and Rosso”, “Louise”, “Emily”, “All I ever Know”, moment in which two members of the band went to the other side of the stage (the big stage had been divided into two, and in the other part the following band was doing the sound check) to tell the band off as the music was arriving at their stage. Quite an experience for the guys of State of the Union. After the incident, they continued with their classics: “Loneliness”, “She” y “Lockdown”. Another great concert. 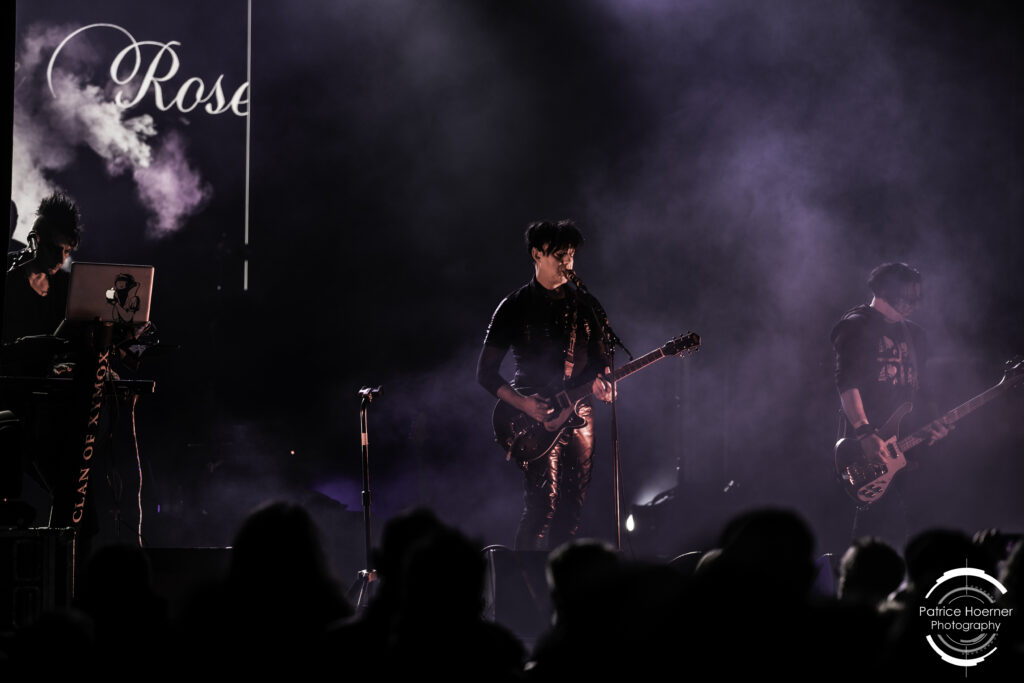 State of the Union

State of the Union is a band from Los Angeles in which we can find Belgian musician Jeremy Venganza, who, apart from being told off by Clan of Xymox, had the difficult task of replacing Fields of the Nephilim. We like so much their first album that was represented by “Children of the Night” or “Romancing the Stone” and we quite enjoyed their gig. On the positive side, we had finally found the best spot to hear them. On the negative side, we were quite tired when they played. Anyway, before saying goodby with “Mindless” they played a pretty good bunch of tracks that sounded quite well. For us it was a great way of ending the festival. 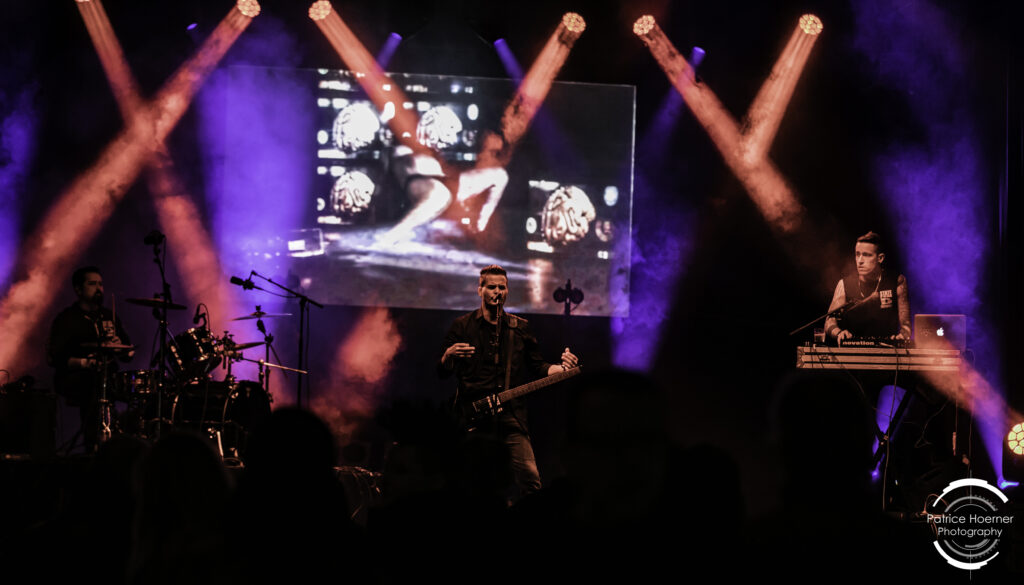 Belgian cover band Wegsfeer played also at Sinner’s Day Special and we quite enjoyed their concert, but on Monday we were too tired to see them again. So after seeing their first song, we went back to the camp site, thinking that there was one day less left to the 2022 edition.