The second day of the festival was characterized by some really good concerts and the bad weather, especially the cold (the venue had some big open windows at the top to guarantee a proper ventilation) and the issues created by the rain. After the long Saturday, we started to feel a bit tired during this day in which we stayed from 11:00 to 1:30 a.m. without stop.

The festival started with a band we like a lot: English synthpop act Empathy Test. The singer Isaac Howlett did not seem especially happy of playing that early and, although we understand his position and it’s normal that a band with their level wants to play later, we can also understand that the organization wants to have the festival full since the first hour of the day. And they achieved it as the audience was quite numerous for the concert. The three-piece started with “Monsters,” title track of their last album. They continued with “Empty Handed,” “Vampire Town,” “Stop” where the singer proved his amazing vocal capacities, the great track “Bare my soul” and the powerful “Fear of Disappearing.” We were waiting for their wonderful “Losing touch,” and it was perfect, the first magic moment of the day. The concert came to an end with “Here is the Place.” An insuperable way of starting a festival. 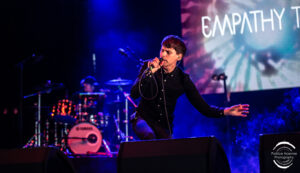 When the second band of the day it’s Haujobb, it means that the festival has a really great line-up. The duo gave an incredible show, starting with “Antimatter,” and continuing great tracks such as “Input Error,” “The Noise Institute,” a “new one” from 2011 entitled “Little World” that had violins played by In the Nursery, “Renegades of Noise,” the very powerful “Dead Market” and the awesome “Houses and Gardens,” the first track that the band released. Great. 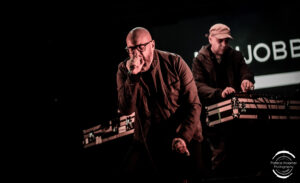 Korinthians were in charge of opening the Belgian stage. I already knew the band as I reviewed their self-released album Chaos Control. It’s a four piece with a very interesting first work, as I commented back in the day. Two of the best moments of the concert were their cover of Joy Division’s “A Means To An End” and the fantastic ending with their great “Icarus Airlines.” Really good.

Claus Larsen played, on his own, another of his great concerts. It doesn’t matter how many times you have seen Leæther Strip, his visceral EBM will always surprise you. He started with all long, powerful and stark version of “Don’t Tame your soul” and continued leaving us open-mouthed with, “Civil Disobedience,” a very hard “Strap me Down,” “Evil Speaks,” a tremendous “Japanese Bodies” and a great interpretation of “Adrenalize Rush.” Fantastic as always. 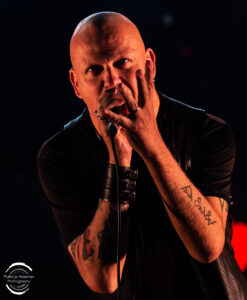 The Delvers is a modern five-piece wave band that sings in Belgian. They played tracks such as “Alles Vatte Vur,” the potent “Robotman,” combative songs like “Wij worden wakker” and a cover of Grauzone’s “Eisbär.” Interesting. 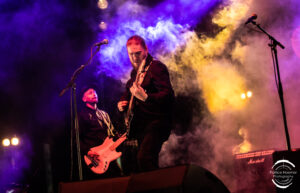 Classic Goth rock band BFG started with a very powerful introduction in which we could notice that they came with three guitar players on stage. BFG released their classic albums at the end of the eighties, came back in 2016 and now, classic guitar player, Mike Simii has recently published a successful book. From the initial “Love Grind,” in which one of the guitar players used a doll as slide to the end, they gave a great spectacle. They played some potent versions of classics such as “Anonymous,” “Switch,” “Myth Club,” “Western Sky,” “Higher The Heaven Is,” “Paris” and “Amelia.” The audience really enjoyed the concert and a proof of that it’s the large number of fans that run to the merchandise stand to buy the CDs and t-shirts. 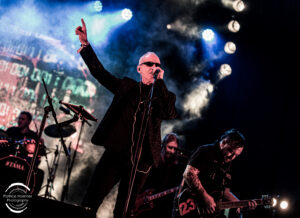 Although we are not living in Belgium, I like to think that we keep pretty much up to date with the new Belgian bands. And so, we knew the following band The Mars Model and even own a copy of their first EP. Very powerful, epic and with killer-guitar riffs, the band had a very punchy sound. For all of you that want to know a bit more about them, we will try to interview them next year. Meanwhile, listen to their EP entitled FrancoBelga and their new singles. 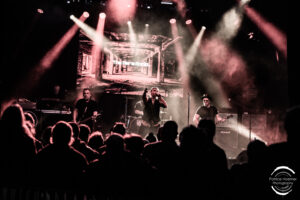 It can give the impression that I am exaggerating, but A Split-Second gave another magnific concert. With such as setlist and keeping their sound as classic as possible, not too many things can go wrong. They started with “Colonial Discharge” and already in the second track, “Rigor Mortis,” the audience went mad. Continuing with “Backlash,” “Firewalker” and “Vengeance C.O.D.” as you can guess, the intensity didn’t decrease. During the last track commented, the singer hit the electronic pad with both his elbows and head. We could not stop dancing with tracks as “The Colosseum Crash,” “Mambo Witch,” the great “On Command” and “Flesh.” Fantastic. 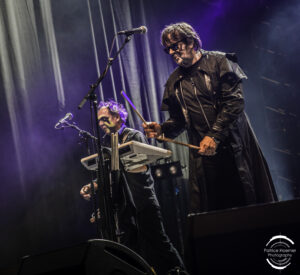 We did not know Belgian coldwave band Such Beautiful Flowers and they were a very nice surprise. Powerful and with a lot of darkness we enjoyed their music so much, we did not hesitate and bought their first EP after the concert. Among the tracks played, let’s point out “Purest light/Blackest Curse” and an original and minimal cover of “I wanna be your dog.” Please give the band an opportunity, you won’t regret it. 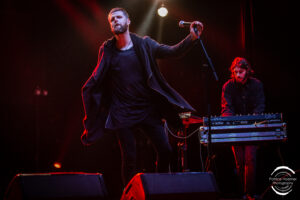 And Also The Trees

English band And Also The Trees played, according to me, the best concert of the festival: 45 sublime minutes of the best Goth music. Already during the introduction, first with the guitar player by himself and soon with the singer reciting, we could feel that it was going to be magic. They took intensity to a new level and really stood out in tracks such as “Shantell,” with their characteristic sound. As a fun anecdote, the singer lost his mic stand and had to look for it later. Passion and drama combined with an infallible setlist. They also played an explosive “So this is silence, and the classic ‘Virus Meadow.’ If in the future, they play somewhere not too far from where you live, don’t hesitate and go to see them. Breathtaking. 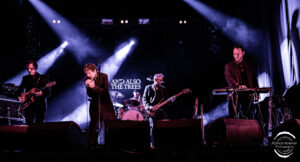 We were not the only fans who wanted to see the minimal synths pioneer and the Belgian stage was practically full. He commenced with “Woke up this morning,” continued with “Breathtaking Beast” that was great, a prophetic “Nature isn’t bound by borders” and other tracks from his last album, “Different World,” such as “Ostrich Politics.” Around the second part of his concert, he started having some problems as the rain, together with the powerful wind, started to fall on the Belgian musician. Through the beams of light, we could see a persistent curtain of rain that could endanger his gear. The concert had to be stopped and after some tense minutes, the organization managed to solve the issue and the gig continued. Proving to be a great professional, Enzo continued with “Connected,” one of the best tracks from his previous works Control, and the final “It’s going on and on.” Even with the problems, it was a great concert. As a fun note, after the concert, the DJs played “The rain” by The Cult. 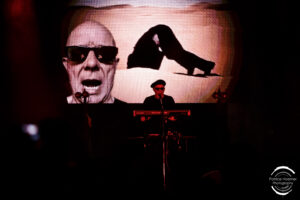 It’s always nice to see a band as special as The KVB. The band had the luck that because of the weather almost everybody was inside, something that the band really deserved. They are really unique at the art of creating atmospheres and managed to surround us with their sound in songs such as “Into Life,” “World on Fire” or “Dayzed” like some young Jesus and Mary Chain. Very enjoyable. 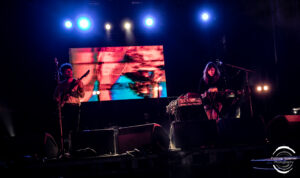 Sadly, their gear got wet, and they could not play.

A Slice of Life

Finally, we could see live A Slice of Life, a five-piece post-punk band that we interviewed a few years ago and since then we have been looking forward to seeing their concert. The creators of Restless are one of the most interesting post-punk new bands of the moments and we were happy of seeing them in such a good spot. Dirk Vreys, the singer, appeared with his son as they did in Sinner’s Day Special with their side band The ObsCure. Robert Smith’s influence can also be heard in A Slice of Life, but they proved to have a sound of their own. They played a few songs of their first album such as “Sweet Sin” and new material in the form of “Seven Days” or “What doesn’t kill Make me stronger,” and “Liefde Is Oorlog,” one of their best compositions with a powerful ending. Really good. 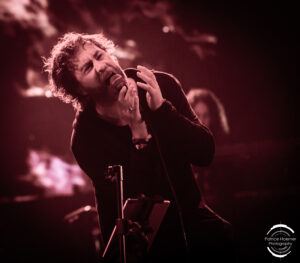 Your Life on Hold

We continued at the Belgian stage with the Goth rock band Your Life on Hold, that proved that the country could be top exporters of these kinds of sounds. The deeper voice of John Wolf and the great atmospheres are the strong points of this band that gave us a glance of their career with the great guitar work of “Already Lost,” “Nowhere train” or “Anywhere Out there.” They left us speechless. 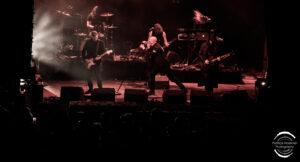 After a first track played behind the curtain, the future pop band Covenant opened fire with “Bullet” that was followed by “All That Is Solid Melts Into Air,” one of the best tracks of their last EP. We had a great interpretation of a funny Eskil in “Fwx1 (coming home)” and the band had a great sound, something normal if you have Daniel Myer and Joakim Montelius in your ranks. They were great in “The Men,” Eskil spoke about his love for Gary Numan, and they made us really happy with “Ritual Noise.” The only negative point: we missed a lot of our favorite songs. 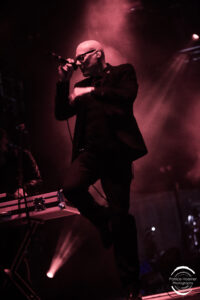 Using the bloody “The Final Countdown” as intro track, the Belgian punk band Funeral Dress, made their entrance. The concert consisted in a list of hymns interpreted with pure Oi! spirit. Only with the names of the songs, you can get an idea of how the atmosphere of the concert was: “Death and Glory,” “Cops are not human beings,” “Sex Drugs and Rock And roll” or “Party On,” this last sang with the public. In between they played a cover of “Down Under” sang by the guitar player. Energetic and quite fun. 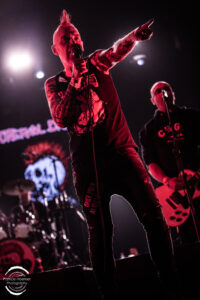 If we consider Intruder the best music that Gary Numan can offer today, his concert at Sinner’s Day was the best that we can expect of the English musician. If you enjoyed his last album and his latest works, you would have lived a great concert. If you are still in love with Replicas, just wait for the time machine to be invented.

One of the largest crowds of the festival congregated at the main stage to see the performance of Gary Numan. He started with “Halo,” a great beginning for a concert and continued with “The Chosen,” one of the best tracks of his last album. A deafening “Metal” from The Pleasure Principle was followed by “My Name is Ruin.” Also from TPP he played the classic “Cars” that was one of the best moments of the night. We saw the concert with our colleague JL Marchal and we can tell you that he really enjoyed it. “The Fall” had a central part full of noises, as we like it and “Intruder,” the title track of his last album sounded powerful. We also had some tracks from Splinter: Songs From a Broken Mind, such as “Everything Comes Down to This,” “Here In the Black” and “Love Hurt Bleed” and the concert came to an end with the legendary “Are Friends Electric?” Cold and tireness made us rush to the exit but before leaving we saw that the band was returning for an encore, so we returned to see it. “Haunted” was the last song of the gig, one of the most applauded of the festival.

Play VHere in the Black 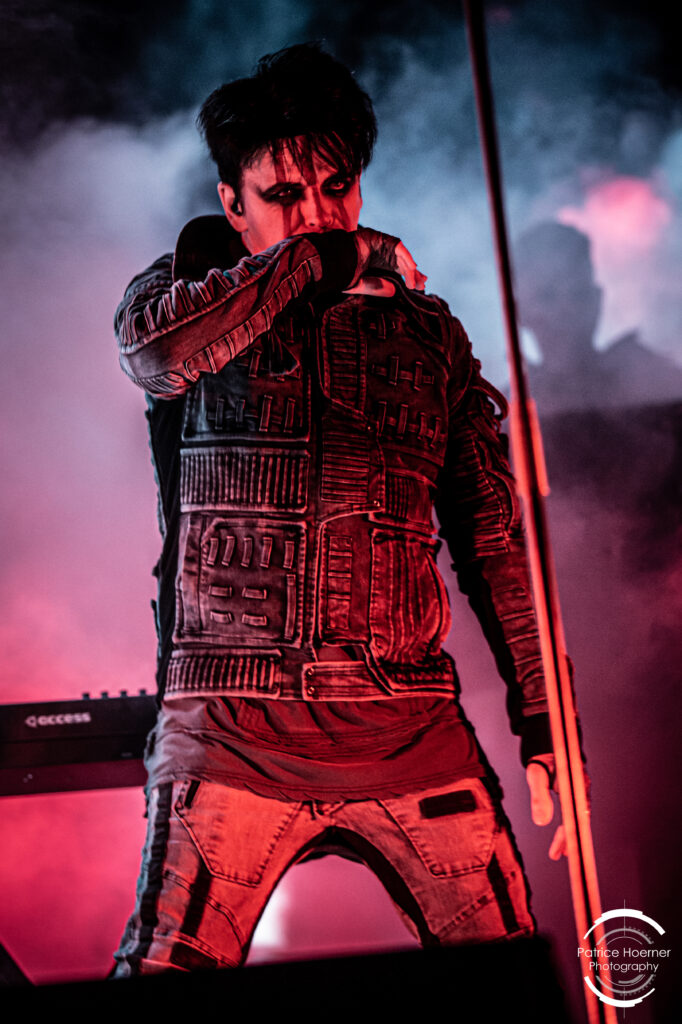