This week, we wanted to review Flowers of Doubt, the first album of Rain To Rust, when we realized that he had already released a new one. We are really sorry for being so slow writing our reviews and we will find a way to avoid this happening in the future. But let’s cut to the chase: Stillborn Flowers is the second album by Rain To Rust, a post-punk project created by Turkish musician Mert Yıldız who released his first single We Gave It All in October 2018. Mert Yıldız has played in a lot of Turkish underground bands, such as Black Front, The Hollow Dolly, Dead Man’s Dream or Dahakara. Now, he composes and records all the music of this his new project and at the same time, he is the man behind the Innsmouth label. Stillborn Flowers can be bought and heard here. 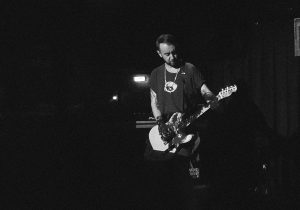 The new album can be seen as a continuation of Flowers of Doubt because all five of the new tracks are coming from sessions from the previously mentioned album. Stillborn Flowers starts with “Died”, a track already released in a Black Front’s album, but the version included here is really different and even being fans of industrial metal, we prefer the intensity achieved here. The album continues with “Let’s Fall Again” that could be a perfect single as it’s a very catchy track with a great post-punk sound reminiscent of the 80s. We remain in the same decade with “Free fall in the night”, another great song with influences of The Cure that manages to capture the magic of our favorite decade thanks, in part, to the edgy sound of the guitars. Although “Marbled Sunlight” impresses with a galloping rhythm, it’s the darkest track of the album. The last of the new songs is the masterpiece of the album: “Dead Violet Nights” conquers us thanks to an original and vibrating production.

The album also includes four songs that we already knew from the previous record. There is an alternative version of “For When It Hurts” and a second one in which Tuğba Selin Ülker (Basic Human) adds some voices and additional programming that makes the track perfect for the dancefloor. We can also find a new version of “A Farewell with Regret” that shares the elegant sound that Japan had when they released Tin Drum. The album finishes with a shorter version of “Time and Time Again”.

We would also like to remind you that Flowers of Doubt is an album worth of your time, where you can find eight great tracks. From the very beginning, the song that gives the title to the LP, you can easily get an idea of what you are going to get: a catchy post-punk/goth rock sang with passion but without affection. “Drinking the Ghost” is another powerful track with sharp guitars and lyrics that won’t leave you indifferent. “No longer Human,” reminds us of The Cure again and it’s the song where the way of singing of Mert really stands out. “Time and Time Again” with feminine chorus and a beautiful electric piano is one of the catchiest tunes and the one we have enjoyed the most. “Burn to Light” is slow and dark: a look to the abysm sang with a solemnity that for once can be believed. “A Farewell with Regret” is another of the great moments of the album, a song that also appeared in Stillborn Flowers, as well as a “For When It Hurts”, a melancholic and perfect ending for this great album.