Painted Romans featured in our news section just one month ago with their last single. In that occasion, we wrote some lines about the career of Mats Davidsen who is now back with this new EP, entitled Heart that has been released today in digital and in a very limited CD edition (although the CD is going to be delayed 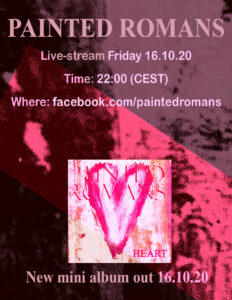 due to some technical problems). This is the first album of Painted Romans in ten years and, as Mats Davidsen says, it’s a come back to his origins, a work related to the music he was doing with his former band Wallpaper Silhouettes, one of the few Norwegian post-punk acts. He will be performing the album (that you can listen to and buy here) tonight, all the info can be found on the left.

In Heart, we can find six songs that will take us to different parts and moments of the eighties, but, don’t get me wrong, this is more than a trip down memory lane. The album starts with “Fall” where Mats sings with passion backed by some inspired guitars. The album continues with “Forget”, a track that makes me think of the sophisticated and dark pop/rock from the eighties. “Drive Me On” sounds like INXS but with a more elegant sound. It’s very catchy and danceable and it could have been a hit in our favorite decade. We already knew “Formation” as it was the first single and we reviewed it last month. The melancholy of “Formation” is also present in “New Kind”, a kind of continuation that shares the same lyrics. The class that Roxy Music patented at the beginning of the eighties appears at the beginning of “Treat Yourself” until some post-punk guitars make their entrance in what can possibly be the best moment of the EP for post-punk lovers. Listening to this EP, we can feel that Mats Davidsen has put much of his heart in it, but he has also used brilliantly his head to dress his melodies in the best way possible.

Heart has been written, performed and produced Mats Davidsen, with Patrick Wray and Roxy Dunn on vocals on Drives Me On and former Wallpaper Silhouettes and Painted Romans member Jo Henning Dahlø Lien playing acoustic drums on “Forget”.