Whispering Sons are the new sensation in the current post-punk scene, which becomes each day more interesting. They are a young quintet from Belgium, with classical references (when we speak about classical, we think of The Cure or The Chameleons, of course). Last year, they published the single White Noise under the label Weyrd Son Records and this year, we will probably be able to listen to their first album. 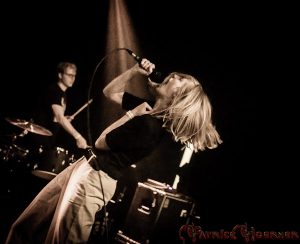 —Endless Party is the name of your first EP. For a first recording, you seem to have very clear how you want to sound. How was the recording?

—Endless Party was indeed our first real release. We had written a couple of songs in the same period, and they felt like a coherent whole, which is why we decided to record them. We did the whole recording process ourselves in our rehearsal space. Afterwards we decided to find someone to mix it because we lacked the required technical skills and felt like the songs would benefit from taking a step back from the whole DIY approach. After the EP was released on tape in 2015 (Wool-E Tapes), it started to live its own life, which we never thought it would. Vinyl and CD editions (Minimal Maximal) followed in 2016 and people still seem to like it.

—The single Strange Identities was released with a very disturbing video. How much were the band involved in the making of the video?

—We decided to work together with a duo of directors (Koen Blauwblomme and Pieter de Ridder). We gave them complete carte blanche for the video. Of course we knew before filming what the script was like, but didn’t know what the result would be. The video was their creative output, whereas the music was ours. It was a very interesting collaboration and I think both parties are very happy with the result (even though I still have issues watching the video;-) ).

—Your song “Performance” has been remixed for the b-side of your second single. Are you interested in dancefloor oriented remixes of your songs?

—Again, it’s interesting to hear someone else’s take on your music. So if there are opportunities like that, we would definitely like to hear them, but it’s not something we’re purposely aiming for.

—When are you going to release your first album?

—There is no set date yet. We are working on it now and hope to release it sometime after the summer. 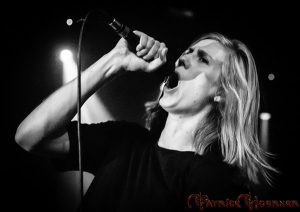 —There is certain similarity between Fenne’s singing and Nico’s. Do you like the music of the Velvet Underground singer? Any particular album?

—I sure love the Velvet Underground, but I don’t know much of Nico’s solo work. I should definitely delve into it soon.

—I read that a song by The Chameleons led you to form the band. How was it? Any other band from the eighties that you like?

—It wasn’t really one song of the Chameleons in particular. We just have a general fondness for the band and, of course, a lot of other bands from the eighties. We got our inspiration from them in the first place.

—And what about more modern band like The Soft Moon, Xiu Xiu or The KVB? Do you like them?

—Big fans of all of them. The Soft Moon and the KVB are definitely examples of how to make music from the past sound fresh again. Xiu Xiu, on the other hand, is my all-time biggest inspiration. I love everything they made.

—You are going to play in the M’era Luna festival. Do you feel part of the Goth scene?
We have played a couple of festivals in the goth scene, and there are more to come. Even though we don’t feel part of the scene as such, it’s great that they love our music and it’s always a pleasure to return to it.

—Do you think that your music has a better reception in northern Europe? What were your experiences like in countries like Italy or Portugal?

—It really depends from city to city and how frequent we’ve played somewhere. The last time we played in Porto and Lisbon, for example, we were part of a festival and the reception was great.

—What can your Spanish fans expect from your concert?

—A lot of energy and a lot of new songs.

You can know more about Whispering Sons on ElektroSpank music magazine.