Die Selektion is a German EBM band who, with only two records, has become one of the most interesting projects of the genre. Famous for their dynamic lives, they’ll be playing in Madrid on March, 9th, at the Wurlitzer venue, during an event organized by Indypendientes. Fatamorgana, the new project of Belgrado singer Patrycija Anna, will open the night. —Your first band was called L U C △. What can you tell us about this first project?

—It was just a bedroom-noise project formed by Luca when he was 15. It was basically just him, a guitar amp, broken keyboards and his computer. Soon he developed the idea of playing live with this and got 3 other friends on board. After a while he decided to form Die Selektion with Hannes Rief and Max Rieger.

—How did you add a trumpet to your sound? Do you like Tuxedomoon (they used a sax, but in a way a bit similar to you).

—Hannes was playing trumpet in an orchestra for a long time and it’s the instrument he is best at. It just seemed natural to us that he is going to play trumpet in Die Selektion, we did not really think about any other bands or something. Anyhow, we surely appreciate and like Tuxedomoon. We covered “In a Manner of Speaking” a few times back in 2011.

—What is your EBM selection? And Darkwave?

—We love DAF, Nitzer Ebb, Front 242, The Klinik, Portion Control, Liaisons Dangereuses and all the other legendary acts and also follow newer acts like Visitor, Multiple Man, Sturm Café or Klack, so EBM always had a huge impact on Die Selektion. Darkwave was never really our thing to be honest and we don’t really get why people still try to drag us into this.

—How is your relation with your label aufnahme und wiedergabe?

—Very good, I’d say. Great label—we are very happy to be the second official release there and

that we got the chance to keep on putting out stuff there.

—Do you think that the German language fits better some styles? Like yours?

—We think that any language can fit any music, as long as you use it in a way that feels right to you. Making music is not about pleasing others for us, it feels good for us in the way we do it and that’s why we do it. If other people like it, that’s even better and makes us happy.

—Can you describe your concerts, as you play as a duo?

—If the connection between the crowd, the place, the sound and us is right then it can be the ultimate prosecco-explosion and the party of your life haha. If what we mentioned before is the case, then you can expect stage dives, people dancing on stage with us, people singing with us, prosecco showers. Just a good and sweaty time.

—How was the recording of your first album?

—There was no real recording process. We had our rehearsal every Tuesday and did a new song almost every Tuesday. The first album is more a compilation of very rough and fast recorded songs that we created in approx. 3 months. 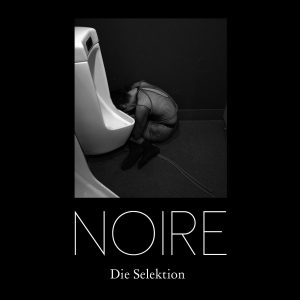 —What’s the purpose of Noire, a cassette with songs from the first album?

—The cassette came out before the LP, we just got asked after releasing the cassette if we would like to put this out on vinyl as well, so we recorded a couple more tracks and then released it together as the “first album”

—Why did you wait seven years between your first album and the second? Regarding the second album, do you think it’s a big step in comparison to the first one?

—Basically, six years. We just wanted to create and develop something completely new, something that sounds like a step forward. More mature, more grown and we are very happy with the outcome. We are surely aware that some people prefer the style from the first album, which is more DIY and rough, but we are also aware that we got many new people listening to us because of the new sound. Speaking about all this, we also had a band member change, as Max Rieger left the band for other musical projects, we got Samuel Savenberg to join us. All of us still study, have other jobs, also work with different musical projects as well. There was no rush for us to finish the album. Anyway, we promise the next album won’t take 6 more years haha.

—Do you consider yourself party people?

—Well, aren’t we all “party people” in the right place and moment? We luckily had a lot of fantastic moments and concerts during the last years, so that almost all the shows started being a big party among us and the crowd. We are not really into the concept of a normal concert for our music, doors at 8.00, band on a well-lit stage at 9.00. We want to play late, there should be no breaks between acts, just ongoing music, there is no need to see us properly, we prefer if you just see our silhouettes moving in red or blue strobe light and let the sound and the moving light make you feel happy and put your mind in ecstasy.

you counted with four big names like Ancient Methods, Tommy Four Seven Konstantin Sibold and Xarah Dion. How did you contact them and why did you choose them?

—We wanted to have 4 very different remixes and wanted to have 4 acts that are different from each other and come from different circles. We know all 4 acts personally and just thought this would be a great combination. We are very happy with this release and think that all 4 did an amazing job.

—Where do you prefer to tour? Who is the best public according to you?

—Russia always welcomes us with open arms and hearts. We love playing there. Apart from this basically every city in this world can be great to play, as long as we are in a room with the right people.

—What can we expect from you in the future? How do you see yourselves in ten years?

—New Music and some shows here and there. We see each other still doing Die Selektion. We can’t really say how it will be but we know for sure that we want this project to go on forever.