Five new bands have joined the already huge line-up of W-Fest. The festival will take place from the 21st to the 24th of May, at the Waregem Expo, Belgium, and among the already confirmed bands, we find names like Front 242, Fields of the Nephilim, KMFDM, Leather Strip, Minimal Compact, The Stranglers, Test Department and Suicide Commando. 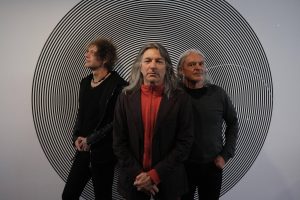 Among the new confirmed acts, we have to highlight The Young Gods: the fabulous Swiss electronic rock band will play at the festival for the first time on Sunday 24th May, sharing stage with bands like A Slice of Life, And Also the Trees and Cold Cave. The band who wrote classics like “Skinflowers” or “Kissing the Sun” played a few years ago at the only edition of Neuropa, and we bought our tickets to go to the 2018 edition of W-Fest there! They were our main reason for going to Bologna and they will be a good excuse to go again to the festival in Belgium.

Funeral Dress are a Belgian punk/oi! band that started in 1985 and next year, they will be celebrating their 35th anniversary. In 1987, they released on their own label their first EP, called Army Life, and since then, they have released albums like Free Beer for the Punk, Singalong Pogo Punk or Party Political Bullshit. See you at the mosh pit.

Red Zebra, the classic Belgian punk band will play at W-Fest for the fourth time. They are really good live, and we will never get tired of seeing them. In 2020, they band will be celebrating the 40th anniversary of “I Can’t Live in a Living Room” and they are going to release a new single! We hope to see them again in the line-up in 2021, but this time with The Kids and De Brassers the other two legendary Belgian punk bands from the 80s.

Jah Wobble was the bassist in the first two records of PIL. I mean that he PLAYED in “The Metal Box”, one of the best albums in history. On his own, he has published a lot of records, worked with Can members Holger Czukay and Jaki Liebezeit, with Brian Eno, with Bill Laswell… He created the super group Invaders of the Heart with Natacha Atlas, recorded albums of Maghrebi jazz and traditional English music… Always with dub as main reference, he is an artist that you must see at least once in your life.

Berlin got a huge international hit with “Take My Breath Away”, from the Top Gun soundtrack. The record where this track is included, called Count Three and Pray, is a bit more rock that what you could expect after listening to the classic ballad. In fact, the album was produced by Bob Ezrin and Ted Nugent, David Gilmour, Gregg Wright and Kane Roberts play guitar on it.