For the last 10 years, The Underground Youth have published 10 records where we can find high quality psychedelic rock, post-punk and shoegaze. We’ve spoken with Craig Dyer about his band’s career and last album, Montage Images of Lust and Fear. They’ll be presenting it, supported by Second Still, this Friday in Sala Sol venue in Madrid, during a memorable night. 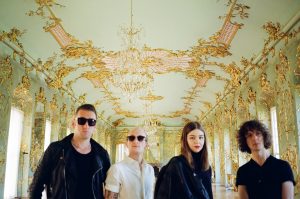 —How did you start The Underground Youth? At the beginning it was only you, right?

—It was just an outlet for the songs that I’d started writing and recording. I had no intention of forming a band or releasing the tracks in the beginning, it all just grew from there.

—The influence of Bob Dylan was important at the very beginning, which of his periods do you like the most?

—It’s impossible to narrow it down to a specific period. I couldn’t even name a favourite record, there are too many that have had an effect on me.

—How was the music scene in Manchester back at the time?

—We were never really a part of a scene in Manchester so I don’t really know. I wasn’t really interested in integrating into that when I started out.

—What were your influences when you recorded Morally Barren, your first album?

—Hah. I think it’s fairly obvious. It’s a very derivative collection of songs. It was me learning how to write and record by imitating what I loved. My own style was born from that.

—Was your second album Voltage released in 2009? It’s the only one listed as only a reissue in Discogs. All your first three albums were self-released, how did you advertise them?

—Morally Barren and Voltage were both “released” in early 2009. I just posted them online for people to download and listen for free. There was no advertising, I guess the right people just stumbled across them and a following developed.

—Having a track called “Fear and Loathing in my Own Private Memory,” how autobiographical are your songs?

—Some are very personal and completely autobiographical. Others are works of fiction. 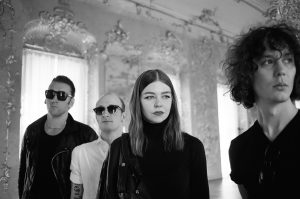 —The cover of Mademoiselle, your record from 2010, stars Anna Karina from Alphaville and you also have a song called “A Band Apart.” Are you a fan of Godard?

—In Mademoiselle, you made a cover of Spaceman 3’s “Lord Can You Hear Me?” Why this song? Do you think that the rest of the album kind of shares the same mood of the song?

—I honestly can’t remember why I chose to do a cover of that song. It’s strange for me that Mademoiselle became so popular, for me it’s a strange mix match of songs.

—What do you mean with the title The Perfect Enemy For God and what relation does it have with the content of the album?

—It’s a lyric from the song “Veil” that features on that album. I guess the meaning lies somewhere in that song. I don’t really discuss my lyrics in a literal sense, they’re open to interpretation by the listener.

—Sadovaya from 2014, was written when you were living in Russia, how was the experience? The album was influenced by Russian post-punk, can you tell us something more about this scene?

—I never actually lived in Russia, I spent a lot of time there, though. St. Petersburg is a very artistically inspirational city. I wouldn’t say Sadovaya was inspired by Russian post-punk, though, I’ve since become a huge fan of that scene, the band Kino specifically. But at that time it was an undiscovered treasure to me.

—A Lo-Fi Cinematic Landscape is a collection of instrumental recordings for a short film that was never made. What happened with the project? Have you thought about doing soundtrack?

—The film was never going to be made. I just imagined it. I’d love to start working on soundtracks, it’s something I’ve talked about doing for years but I’ve just been so busy writing and touring. One day though I’ll do that…

—Do you think that the psychedelic influences in your music have disappeared little by little in your albums? For example, in Haunted from 2015, the sound is darker, more eighties, and it’s also the case of the album and the cover.

—I don’t think about these things, the process of me writing and recording is a fluid one. I don’t think about how the songs will sound before I start the process. If my influences have changed over the years that’s only natural. I’ve changed as a person over the ten years The Underground Youth has existed. I also think it’s important for an artist to change and not stay in the same place.

—Do you think that What Kind of Dystopian Is This? From 2017 was your “comercial” album?

—Hah, was it commercial? I wouldn’t say so. 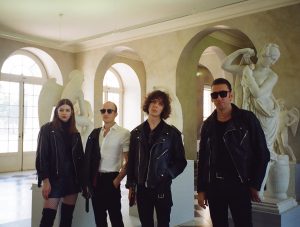 —The band has just published their new album, Montage Images of Lust and Fear. Do you think it’s way darker and rawer than your previous albums? Was The Birthday Party an influence while recording it?

—Again, I didn’t think about how the songs were going to sound before we started the process. How it sounds is the result of us writing and recording live as a band and creating a record that represents where we are now and how we sound live. I guess that produces the “raw” quality. The Birthday Party have always been an influence, if that comes through more on this record it wasn’t a purposeful decision.

—This album has been recorded in a studio, was it the first time? What can you tell us about this experience?

—It’s not the first time, but anyway it’s our guitarist Leo’s studio in Berlin. We recorded the last two albums there. We lose this space soon so it will also be the last one recorded there. It’s nice to change and record in different environments, though, where you definitely record affects what you produce.

—Also, for the first time, the members of the band have been involved in the writing process. Was it difficult to write songs with other people after so long doing everything by yourself?

– No, it was a very natural and enjoyable experience. We wrote and recorded the album really fast and had a lot of fun doing it. It’s nice to share that experience rather than going through it alone.

—You recorded an EP under the name Noise Exposure with your wife, will you do something again with this name?

—I never say never but it’s unlikely… I’d forgotten about it to be honest hah. We’re writing together in The Underground Youth so it’s not really necessary to revive that project.