For some of us, the only possible cult is music, the unique holy thing in our lives. If we talk about cults and holiness, we must talk of Holygram, one of the most promising post-punk/shoegaze bands of the moment. They are going to play at the W-Fest, on the 23rd of May. 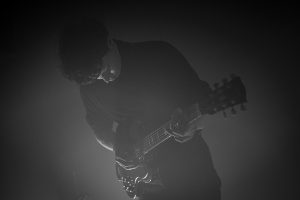 —The band had said that they have a special connection with the city of Cologne. We visited the city a few years ago. How would you describe the connection between the city and Holygram?

—The connection between Holygram, us and the city we live in, is that we let ourselves be influenced and inspired by what surrounds us. It feels more authentic to us than emulating a music genre that actually has its roots in another region of the world. The city we live in, the things we experience here every day, are things that occupy us and influence our musical work.

—What’s the meaning of the name of the band?

—That is and remains a secret.

—How do you define the band, musically? Imagine someone asks you what kind of music Holygram does.

—It’s a mixture of Post Punk, New Wave, Shoegaze, Krautrock and everything we like at the moment of composing. We are a colorful bunch of people who all have different musical backgrounds and try to combine them. Sometimes it is easier, sometimes it is more difficult to unite all these moods and influences. But you also grow with each conflict.

—How was the recording of your first EP from 2016? Did you have experience in studios before?

—Yes, we all had our experiences in studios. The EP was the first time we did everything ourselves, because we needed time to create the sound we had in mind. That’s not possible in the studio, you can’t lock yourself up for 3 months and work on sounds unless you’re a millionaire. During this time, we learned a lot about recording and how to make the production an integral part of our composition. It was fun but also exhausting we set the tour start as a deadline because we wanted to offer something to the people at the concerts.

—Your EP was released by a Spanish label, Oráculo. How did they contact the band?

—They wrote to us when we were in Prague, we were all pretty excited because the Ep was only a few days old. We immediately found the label interesting because of its releases and philosophy and didn’t think long about it. It was just right for the moment.

—The EP can be found quite expensive in Discogs. Any plan of a reissue?

—It was a limited edition and there is no plan to reissue it. 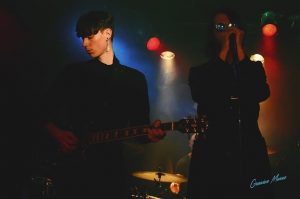 —The Cd version of the EP came with some remixes; how did you select the artists to remix the band? Box and the Twins are also from Cologne and Blind Delon was also releasing with the same Spanish label.

—We had already released the EP via cassette and vinyl, and we wanted a bonus content for the CD which we realized with the remixes. The artists were people we knew or connected through other people.

—Talking about Cologne again and Krautrock, one of your influences, at least for your drummer and bass player, two important bands came from your city, first Can, who for me, is the greatest Krautrock band and also Floh de Cologne. How popular is it now among Germans?

—Funnily enough, Krautrock is more of a niche product in Germany. I can remember an interview with David Bowie on a German TV show where he tells the host and audience about his love for the band Neu! After he realizes that none of the people knows the band is horrified and advises them to check it out.

—Lots of bands are taking inspiration in the 80, what do you like about that decade?

—That decade had a lot of uncertainty about how the East-West conflict would go on, how the planet would go on in general and how to deal with all this as an individual – the music of that time reflects this sometimes with sadness and sometimes with humour. The synthetic sounds of this time also stand in contrast to the spirit of the seventies.

It’s hard to say what I like most about the eighties I think I like the simple thinking of some bands, the reduction to the essentials and the consequent and straightforward sound.

—Modern Cults is your first full album from last year. How did the band write the song? Is someone composing mainly or is it more a group thing?

—Usually a mixture of both. Often someone comes with a bass or guitar riff and we try to make a song out of it, or we meet in pairs and give an approximate structure which is then reworked again in the band. There is no real formula except that we work very sound-oriented.

—The band said that the name of the album is based on the experience of being in an after party where everybody looking at the DJ. This is a modern cult, what are other according to the band? Facebook or Instagram?

—Facebook and Instagram are certainly also a modern cult but from our point of view negatively afflicted. We rather thought of a visit to the church only that the church in this case is the nightclub and the DJ is the priest.

—Again, the artwork of the record presents a person floating, do you want to give some unity to your releases? Or a kind of concept?

—It’s a kind of closer or more detailed view of what we did in the Ep. We wanted to make the sound bigger, more detailed and more extensive. Also, the album shows more facets of us that’s what we wanted to thematize with the artwork. 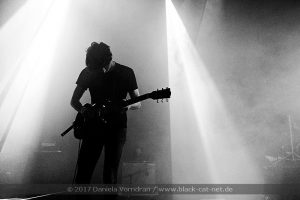 —The band worked with an Italian producer, Maurizio Baggio, because you liked his work with The Soft Moon, right? He also worked with the Italian band Ninos Du Brasil, something really different from what Holygram does.

—Yes, Maurizio has worked with different artists before. We all like the work he did with The Soft Moon very much and we all thought he was the right one for the album. He’s also a really nice guy with whom we really enjoyed working together.

—How was last year’s long European and North American tour with VNV Nation? In 2019, the band played a bit less, although in November the band was on the stages again. Is it difficult to tour so much?

—It was wonderful and interesting to get to know all the cities and people but it was also exhausting. We are all working and we also have to write, record and rehearse the music. This sometimes presents us with problems, but so far we have always mastered them.

—Any interesting new band that you are listening to?

—When is the band going to release a new album?

—We are in the process of sorting the material we have and will go into more detail in the next step. We can’t estimate when it will come but it will probably be finished this year.

—What can you tell us of the band’s future concert at W-Fest?

—Trisome 21, Light Asylum, Underground Youth, KVB, Actors, Visage, Stranglers. Could also be a playlist in our tour bus… what we want to say is that the line-up of the W-Fest is fantastic and we are happy to see all the bands playing there and maybe get to know one or the other.