On January 17, we saw the Belgian tribute band Curtis in concert during their visit to Madrid, part of a Spanish tour that also included Valencia and Barcelona. The concert, which took place at the Nazca Club, opened with the duo The Low Flying Panic Attack, which pleasantly surprised us. We were only present for the last three songs, but they didn’t sound bad at all. 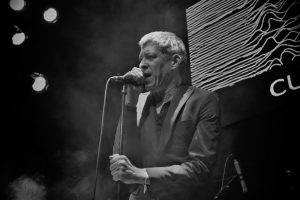 After the typical break, it was time for Curtis, a band that formed for the premiere of the movie “Control.” Since then, they have continued playing, this being the fourth time they were in Spain. We were lucky that it had been 40 years of a mythical performance by Joy Division in Brussels, at the Plan K venue. It was the second time that Ian Curtis’ group performed in the Belgian capital, after a previous concert in October 1979. On that date, Digital Dance was the opening act and it is not difficult to find a bootleg of the concert. At that time, I had just turned three and I was living at the other end of Africa, both reasons enough to prevent me from attending the concert. Taking advantage of the anniversary, the band played almost the entire setlist that the Mancunians had 40 years earlier.

Like that mythical night, Curtis began with the powerful “Dead Souls”, in which we could already notice the band’s favourable points: an ability to create impressive atmospheres, an outstanding guitarist, a great front-man with a different voice but that perfectly suited themes Joy Division’s themes and the great attitude of a band that did not try to imitate but, reinterpret the themes. And well, the impressive songs of one of the most personal bands in the history of popular music. Already with this first theme, the public, quite numerous, began to cheer up. 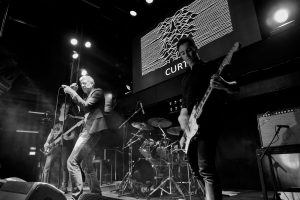 They continued with two songs from Unknown Pleasures “Wilderness” and “Insight” which they played with just the right amount of power, followed by some songs from Closer (remember that it would be released a few months after the concert in Belgium, on July 18, 1980) such as “Colony,” “Twenty Four Hours” and a thrilling “Means to an End.” We were lucky enough to record on video (you can see it on our YouTube channel) 15 of the best minutes of the concert, when the band chained a powerful “Transmission” with “Atmosphere” and “Love will tear us apart.” While listening to the latter, I couldn’t help but compare it to the time I saw New Order, now without Peter Hook, in 2012 tearing that same song apart, partly because of Bernard Sumner’s already famous neglect. They continued with a couple of songs from the time when you could still feel the band’s punk energy, and which Curtis managed to reproduce perfectly, like “Digital,” and “Warsaw.” The end of the concert was approaching and consisted of “Shadowplay” where the guitarist really showed off, “Atrocity Exhibition” and, finally, the version of “Sister Ray” from the Velvet Underground.

The audience clearly wanted more and the band returned to play a tremendous “No Love Lost,” “These days,” the always emotional “Heart and Soul,” and “Ceremony,” a song that both Joy Division and New Order recorded, and that I saw Peter Hook playing in 2016, also in Milan, in a mile long set in which he played 26 songs by Joy Division, but at no time did I have the impression of seeing a band, but Mr. Cook surrounded by hitmen afraid to steal a few seconds of protagonism from their boss. After giving us the creeps with “New Dawn Faces,” the band closed, this time for real, with “Isolation.”

As I left the venue, I couldn’t help thinking that, forty years later, I had been very close to that mythical January night at Plan K in Brussels.