A friend was telling me, a few days ago, that he disliked all these electronic artists whose moniker has been created in a “funny” way using a word play with some famous name. We were talking about the Spanish project Tronald Dump and among others, we cited Com Truise and Jichael Mackson. A few days later, I received this CD of Blind Delon, a trio from the South of France that I already knew thanks to their remix of Holygram. Discipline is the first album of Blind Delon, (a pun with the name of the great Alain Delon, no reference to the band from the 90s), after releasing some 12″s like Maniaque and Edouard. For this record, published last year by the Franco-Spanish label Unknown Pleasures, the band has invited some artists, like I Hate Models, whom we saw DJing in Madrid, a few weeks ago, when life was still normal. The album can be heard and bought here. 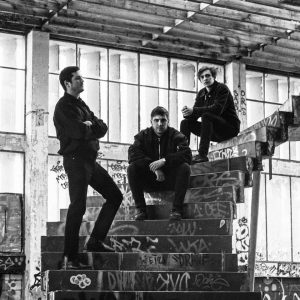 As they have explained, for this album they have been using old synths and amplifiers, creating a very varied album, where we can find influences of John Carpenter and Tangerine Dream but also of the jazz fusion from the seventies. The band Blind Delon, who also releases techno tracks, has added the influence of the genre to their peculiar dark synthwave in these six long tracks, full of details and surprises. The album, which shares its name with one of the masterpieces of King Crimson, gives us six rules that we are happily going to obey.

“Rule I”: The track where the influences of techno and electro is more evident: it starts with an ethereal and repetitive melody similar to those of Vangelis, but after a drum roll, it leads you majestically towards the dance floor.

“Rule II”: This time, the beginning reminds us of the Italian band Goblin and their soundtrack for Deep Red, till the voices arrive and the track morphs into some melancholic Darkwave. Another drum roll and the composition finishes with a very cinematic part.

“Rule III”: The longest track of the album with guitars by Incendie and the voices of Kris Baha and Lapse of Reason. More Darkwave with an atmospheric intro and a disturbing break.

“Rule IV”: After an experimental beginning, we have a very cinematic tune with an incredible 80 flavor that would not be out of place in a movie of the great John Carpenter.

“Rule V”: The “odd duck” of the album: a song with influences of space rock and jazz fusion from the seventies with the collaboration of DJ Varsovie and Arabian Panther adding mandolin and flute, which together with the trumpet and the clarinet give a touch to the composition that can also reminds us of 90s post rock, maybe because they share the same influences. The track starts with the Phnom Penh speech of Charles de Gaulle before a heavy and slow rhythm takes control that continues for a few minutes until dying surrounded by some echoes from the past.

Rule VI: For the last song of the album, we come back to the dance floor with another cinematic track that closes the album, making us wish that it had been a Decalogue.

This is a very good record for these moments of reclusion as it’s good material both for a house party and for escaping from reality through the window of your apartment. Blind Delon has also participated in A Tribute To Genesis Breyer P-Orridge, also published by Unknown Pleasures in 2018, a cover album dedicated to the pioneer of industrial music who sadly died a few days ago. A few months later, the trio released a limited 7″ with their song from the tribute album and a new cover. A good way of honoring his legacy.