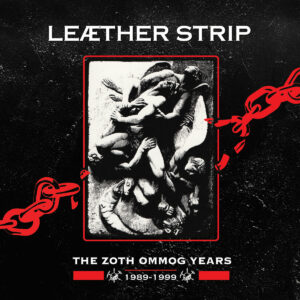 Good news for the fans of the Danish musician: his new album, a tribute to Canadian band Skinny Puppy, entitled Throwing Bones, is going to be released next 13th of November in a double CD edition. Claus, in his Facebook page, has commented that he is going to start to send the album really soon to those people who started pre-ordering. If there is an artist that has mastered the art of covering other people’s songs, that’s Leæther Strip who, apart from his series of cover albums called Appræciation, has recorded tributes to Simple Minds and Depeche Mode.

The other good news is the released of The Zoth Ommog Years, an essential box with the ten CDs recorded during the first decade of the artist, including all the songs/rarities published during those days. Among the material, let’s highlight absolute classics like The Pleasure of Penetration or Solitary Confinement, and also his first album released as Klutæ that we can find here together with the EPs Explicit and Excel. Without any doubt, this is going to be the compilation of the year. The difficult part is going to be to wait until December, date in which the boxes will be sent.