When we found out that Sinner’s Day had been cancelled, the truth is that we felt quite down. It was going to be our chance to finally see Zwaremachine, one of the bands we’ve been following at El Garaje since the beginning of our current venture. Fortunately, in a moment of lucidity, Violaine thought that the Minimal Hypnotic Industrial BodyMusic band might have a date in the area, and after talking to them, we decided to go to the Dutch city of Nijmegen to see them. Der Officer tipped us off that Laibach were playing the next day in a nearby city and the last day of our trip was spent in Brussels seeing The Ultimate Dreamers, but we’ll talk about that another time. 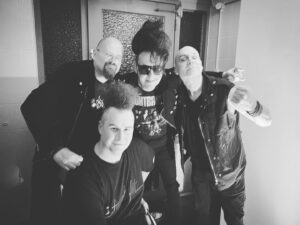 Tired from the long trip, but looking forward to it, we went to Café The Shuffle, the venue located in a residential neighbourhood where along with Mach Fox’s band, the Germans Alphamay and the Dutch Xtort were playing. Being surrounded by houses, the sound in the venue was not loud enough and we would have liked to see Zwaremachine on the main stage of Sinner’s Day at a good volume. On the positive side, we really enjoyed the three bands who gave quite good concerts.

The first band of the night was Alphamay, a German synthpop/future pop duo with an eighties vibe and some remarkable vocal interplay from the members. They based their performance on their 2020 album Conformity, which we were about to buy but disappeared from the merch table before we had time to do it. From it they played “Death is Kind”, “Reach Out”, a nice track called “Heir of Eternity” and “Conform us”. They also had time to look to their past with the catchy “C=64 (Old Friend)” from their 2015 album, Dazzle Camouflage. They returned to their more modern material with the danceable “Afterglow”, which featured the lead vocals of the keyboardist and “Follow Me” with a very future pop sound. And to say goodbye, nothing better than a song like “Good Old Days”. A good concert, really.

Then it was the turn of the Dutch industrial/Wave duo Xtort, the band created by Walter Donkers after the end of HOER. When Walter appeared on stage with his inseparable Alesis Vortex, he reminded me of an industrial Egyptian Lover. They started with their track “Fire” in which they sampled Arthur Brown‘s song of the same name and followed with a more gliding and ambient track called “Zwart”. The concert really started to take off with a song we didn’t know and which was called “This is a trip II” according to the band’s setlist, in which the singer made good use of his two mics, one with effects and the other for normal vocals. The electro keyboards of “The Night Calls” helped heating up the concert, which continued with “All in my head”, one of their latest singles, with more spacey keyboards. We enjoyed their powerful “Die Standt”, one of the outstanding tracks from their second album, Nothing is Real, which we took the opportunity to buy. From their first EP, Knowing You, they played “Am I alone” in which Walter left aside his peculiar synthesizer. Instead, from their second album we heard “Escape” and “Dieses Leben” which were followed by the powerful and danceable “Freundishaft” with a powerful bass. The concert  continued with a song from their first album, the energetic “Seele” and finished with “Die Nactht”, one of their most powerful songs that left us ready for the next concert.

The highlight of the day was Zwaremachine‘s concert, which was really short and we missed songs like “International Hero”, which might be difficult to translate to live performances but which we would have loved to see in Nijmegen.

Zwaremachine are basically a trio with Mach Fox on vocals, Dbot on bass and Dein Offizier playing a giant drum. If you want more information, I remind you that we have interviewed them several times. They based the first half of their set on their new album Conquest 3000 which I also took the opportunity to buy. They had a really brutal start with the frenetic “What We are” and surprised me with the chemistry on stage between the three members, something I didn’t expect from a band that has its members in two different continents. They followed with the catchy “Parasol” and the powerful “Ripping at the Fabric”, one of the best songs we heard that night. We really liked the forcefulness added to the sound by Dein Offizier’s percussion, which together with Dbot’s mastery on bass gave a distinctive touch to the concert. And don’t forget Mach Fox, a frontman with a good stage presence and a really good voice. Back to the concert, they continued with “Zero Container” which sounded more EBM than the album version. Following the order of the album, we had the intense “New Design” and one of our favourite tracks of the band, the amazing “Conquest 3000” which featured awesome tapping by Dbot.

After that, it was time for some songs from the band’s first album, the also remarkable Be a Light. We had “IEYEI” with a strong start by the drummer and which is one of the best tracks of the album. For “DRKNRG”, which they played together with “Person to Person” a member of X Underground Percussion came up to add extra percussion, giving the track an impressive punch. “Be a Light” also deserved a podium place in the best of the night, with a great bass and very good percussion. They finished with “Remain Unseen”, a single from 2018, fast and frenetic like the band’s music. We hope to see them in better circumstances in 2023.