Finally, there is a CD edition of Nao Katafuchi’s first record, published in 2015, now released for the occasion with a few bonus tracks. The album, published by Vuz Records, can be heard and bought here. Nao Katafuchi, who grew up in Tokyo during the eighties, fell in love with electronic music as he spent his teen years in the streets of Shibuya. In 1991, he moved to the Lower East Side of New York where he worked as a sound engineer and at the same time formed the electronic rock band Superfortress, with which he published a couple of self-produced EPs and LPs. In the famous Wierd Record parties, Nao found a scene to belong to and met artists like Xeno and Oaklander with whom he collaborates in this album. During that period of this life, he published his first EP, titled Yumegoto. At the end of 2015, he moved to Germany where he recorded this Émergence for the Nadanna label and became part of the darkwave scene of the city. And last year, he published his last album, Stalhgrau, influenced by his life there and, so far, the last chapter of his musical adventure of this Japanese musician. 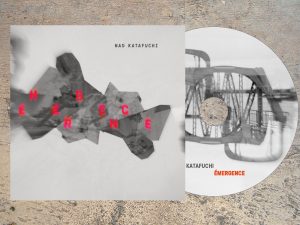 In a way, Émergence is the consequence of everything that we have said in the first paragraph: the love for electronic music, those days living in New York and, of course, the artist’s Japanese origin that gives an exotic touch to some parts of this work of dark synth pop full of romanticism and melancholy. The album first track “Silhouette” starts with some post-punk guitars but the music evolves into dark synth pop with verses that reminds us slightly of A Flock of Seagulls’“I Run (So Far Away)”. Emergency surprises us thanks to a frenetic pace, some parts sang in Japanese and the collaboration with Liz Wendelbo from Xeno & Oaklande singing. In Dance To the End, we find the elegant and 80s romanticism that Brian Ferry delivered in Bête Noire, in what is for me the best moment of the album. “Awakening” is a collaboration with Tomo Akikawabaya (a Japanese minimal/darkwave musician, creator of interesting albums such as The Castle and incredible singles like Mars), one of the voices of the dialogue that together with the synths create a great sense of tension in this track.”Living In My Own World,” sang sensually, has a very interesting production. Powerful and dark synths welcome us in the beginning of “The Lonely Kind”, a good song although it’s the one that we have enjoyed the less. Another of the surprises of the albums is “Comes To My Life” with a vocal style that made us think of 90s dance music and with an irresistible result. Instead the beautiful start of “Ghost Town” bring us back to the 80s with a very New Order sound but sang with the passion of Brian Ferry: another great track. As a bonus we have “Masks” the darker and more mysterious track of the album.

Let’s talk now of the remixes: the first one of “Silhouette” does not change the original too much, but helps us get acquainted with Ohama, another interesting synth pop Japanese artist. Kevin Komoda ex-member of our beloved Rational Youth adds more synths to “Dance to The End” and in some moments makes us think that we are going to hear “Enola Gay”. We also loved the work of Shade Factory in “Living In My Own World”, they give a weird vibe to the song and make it difficult to choose between this one and the original. The remix of No More’s remix of “Ghost Town”, which makes the song even more dramatic, is also very interesting. Another of the exclusive remixes is Psyche’s “The Lonely Kind” that keeps the synths in a second level giving all the protagonist to the voice. And the last remix is done again by Shade Factory, who make “Living In My Own World” more danceable.

In Émergence you have a good album, a manual of how to make good remixes and a door to some interesting Japanese artists from the 80s. Can we really ask for more?