2021 was a good year for the fans of darkwave band Lycia. First, they released a new EP, entitled Casa Luna, and also, there was a reissue of their classic Cold, published originally in 1996 and considered one of the masterpieces of the genre. This week I have bought both releases, and I would like to write a few lines about them and how the band and its music have changed in these years. 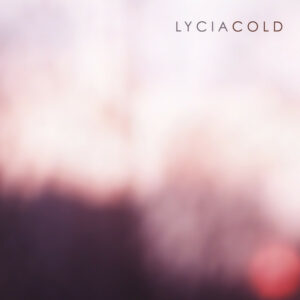 Cold was Lycia‘s fourth album, after Ionia (1991), A Day in the Stark Corner (1993), The Burning Circle and Then Dust (1996) and their debut EP Wake (1989). It was also their last album with David Galas, who started his solo career after this work and would return for the A Line That Connects album. Cold includes nine tracks of cold atmospheres and ethereal voices, that, for this reissue, appear with a different cover. The album was inspired by the moving of the band from the desert of Phoenix to the cold landscapes of Streetsboro, Ohio. We can also find the vastness and coldness of their new home in the long instrumental landscapes of the album. The initial “Frozen” already takes you to those desolate sceneries, with a sound that could be found somewhere between the most atmospheric Cure and the most terrene Cocteau Twins. This last influence is present in tracks like “Bare” or “Baltica”, the first one with a great duet between the voices of VanPortfleet and Vanflower and the second full of a fantastic oneiric beauty. “Colder” continues with its slow pace, keeping the overall cold vibe of the album. Tara takes the lead in the ethereal “Snowdrop”, creating one of the best tracks of the album. “Drifting” reminds me of Slowdive, another of the great bands from the nineties. “Polaris” is quite an original track, with the chorus and the percussion guiding us through a frozen landscape. The guitar in “Later” together with the deep singing of Mike gives a more terrene feeling to the track, another of the best moments of the album.

Overall, a great album of a non-very common beauty that should be in your collections.

Back to the present, let’s write a few lines about their new EP, Casa Luna. Now the band is formed by David Galas, Tara Vanflower and Mike VanPortfleet, the three members that recorded Cold, together with John Fair, who was part of the original formation but left the band in the 90s. Behind the spectral cover, we can find six tracks of what the band considers as a continuation of what they started with In Flickers in 2018.  The new material and the reissue have been published by Italian label Avantgarde.

Among the songs, two already appeared in the second demos compilation of the band, (Early Demos (May 1989 – May 1990)): “Except” and “Galatea”. The EP starts with a track, “A Quiet Way to Go” that reminds me of the more classic Lycia sound and has another great duet between VanPortfleet and Vanflower. Instead, “Do You Bleed?” is the heaviest track that the band has recorded. Frankly, the result is quite good. The tracks that we already knew “Except” and “Galatea” give us what we can expect of the band, the first with a slight flamenco influence that can be found in a couple of tracks of the EP and the second with a clear synth-based sound. “On the Mezzanine” with its Spanish guitars together with the final “Salt & Blood” are the two tracks with that flamenco vibe. Little details that help renovating the style of this fantastic band. In this moment where we can find thousands of darkwave bands, Lycia are back to claim their crown.