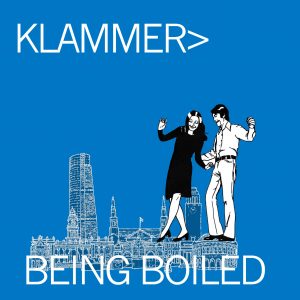 Imagine XTC and Gang of Four have a kid. What would be the name of this child? Of course, this is not some kind of joke; today, we can answer you with certainty: Klammer, a post-punk/dark pop band hailing from Leeds, United Kingdom. Formed in 2014 by Steve Whitfield who produced bands like The Mission, The Cure and Jane Weaver, the band already released three albums greatly acclaimed by the critics. The last one, You Have Been Processed, surely worked on me: after having listened to the first song, I urgently felt the need to listen to more, as if something was processing my brain, telling me: we want more! we want more!

The band is about to issue a new album but god, when you love an artist, when you crave for them to issue new releases, the wait can be very long. Don’t worry, Klammer’s got you covered! The band prepared us a single, under Under Dogz Records: an incredible new cover with a particular modern and post-punk twist of The Human League’s early single “Being Boiled.” So, listen to the voice of Buddha (and what a voice!) and enjoy this marvel. Personally, I already want to move to Leeds to see them live.