Interview: She Past Away

From Turkey, lately we got a lot of sad news about their citizens losing rights, but in the same country was created She Past Away, and incredible dark-wave band. They are bringing their original sound to Madrid during the DarkMad festival on the 26th of October. A darkness as ancient as the Ottoman empire. 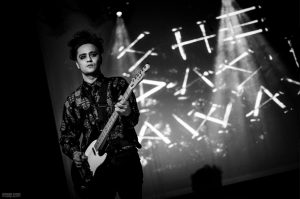 —How were the beginnings of the band in 2006? How did you meet Idrid? When did Doruk join as a member?

—Volkan: We met in a band where we both played before. Doruk joined the band in 2010 for the recording of Kasvetli Kutlama. At the beginning, he was only the producer but then, he began to play the synth and electronic drum parts. At the end, he’s become a member of the band.

—There was a previous band Psychoma, right?

—V: It was a mix between electro and darkwave. We used some of the songs I wrote then for the first albums, with different arrangements.

—You said that you were a metalhead before. What kind of metal did you like? Do you think this music is present in any way in She Past Away?

—V: I began listening to metal when I was 14-15. My first love were doom and death metal. You can hear the influence of the melancholic and depressive feeling of doom metal in the sound of  She Past Away.

—How were your first concerts received in Istanbul?

—V: We were playing for a small minority. We continued playing, but certainly not because we were having a wide audience. 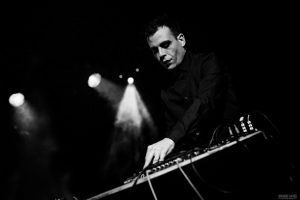 —Although you are leaving now in Barcelona, do you usually travel to Istanbul? How has the Goth Scene changed in these years (you said that it was very small)?

—V: I go once or twice a year in Turkey. I can’t say I followed the events. However, I can say that our music is more popular than before. This year we’ve played at Fabrika Night (with Selofan and Tango Mangalore) in Istanbul. The audience was quite big.

—In the Darkmad festival, you are going to play with a lot of EBM classic bands. Have you been influenced by this sound?

—V: Of course we like old school EBM. Bands like Front 242, Nitzer Ebb, etc. are important to us.

—Lately, Selda Bağcan has started being famous in Europe. Have you ever been interested in her music? She was an important figure in the seventies, right?

—V: Yes, she was one of the important names of the musical scene in the 70s. I can’t really say that she influenced us. We always listened artists like Erkin Koray, Barış Manço and Kurtalan Ekspres. 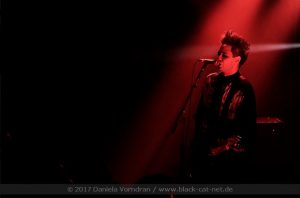 —Are you influenced by any Turkish poet? Or any writer in particular?

—V: Tezer Özlü, Küçük İskender, İhsan Oktay Anar, Can Yücel, Sabahattin Ali, Nazım Hikmet. Those are the writers and poets who come to my mind.

—Your lyrics, which can be translated in your web, talk about religious oppression; did you feel this oppression when the band was living in Turkey?

—V: They say that Turkey is a laic country. Even if countries governed by religious rules don’t seem to be under obvious pressure, I can assure you that it’s present and deeply rooted in society.

—V: The 80s were a real revolution for the music. When I listen to music, I mainly look for everything that has to do with feelings, behaviour, etc. I never liked prog music. In this sense, 80s music expresses a great liberty. We’ve always been on the dark, cold and moving side of music.

—Your first single, Kasvetli Kutlama, was released by Remoov, a Turkish label. Was it difficult to record and release such album?

—V: Doruk founded Remoov Records. At that time, it was a project aimed to reunite alternative bands from Turkey. It was not easy to find a company that would accept to publish a record whose music didn’t have audience.

—Belirdi Gece was your first album. Some of the songs were remastered for a new reissue. What has been changed from the original mix?

—Doruk: The tunes are almost the same, only small details have changed. In fact, it was not really necessary to remasterize the songs, but I just saw the possibility of fixing some issues that were bothering me. 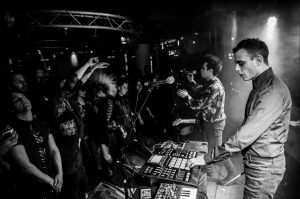 —How was your reaction when you saw that your records were getting sold worldwide?

—V: We had better reactions than expected. I was very happy about that.

—In Narin Yalnizlik, your second album, there is a cover of Kesmeşeker, and in the first one, a cover of Replikas. Why did you choose these songs to cover? Any cover planned for the future?

—V: They were important bands of Turkish alternative scene. We loved their songs. The idea of interpreting them seemed attractive to us. For now, we have not planned to do new versions yet.

—I saw that you are a fan of Décima Víctima, how did you discover this Spanish band and what do you find interesting in their music? Do you know other Spanish bands like Alphaville or Parálisis Permanente?

—V: Yeah, I know a lot of bands from the Spanish post-punk scene of the 80. Décima Víctima and Parálisis Permanente are my faves. Particularly Décima Víctima. I really enjoy their dark wave sound. They remind me of the Cure, from the Faith period. They are unique and very depressive. It’s perfect!

—Doruk said that he liked Italo disco in a few interviews. What do you find interesting in this music? Any special artist?

—D: I love the rhythms, the bass and the synth sequences of this music. Those are elements that can inspire dark music, even if Italo is very cheesy. I really like this 80s feeling.

—In the last album of 2019, Disko Anksiyete, the synths took a bit more of protagonism. Was it something you decided on-the-fly or was it already planned?

—V: The sound of each album is determined by the interactions we’ve had before issuing it. Lately, we mainly listen to synths-based music. You can hear that on the new album. 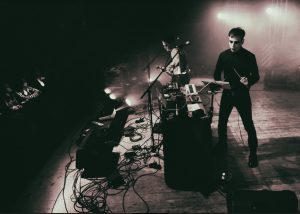 —In this album, there is a song in Spanish, “La Maldad.” How did the band get the idea for doing this? Are we going to have more songs in this language in the future?

—V: The fact of living in Barcelona has had a great impact on me. Plus, there are Spanish bands I’m really fond of and I love listening to Spanish. We’ve been wanting to do this since the second album.

—The band spends a lot of time touring. Is it difficult to keep a “normal” life when you have to travel that much? How many concerts have you played so far this year?

—V: We try to live normally but it’s not easy, particularly when we tour in the US, because we spend a lot of time there. In Europe, our tours are a little shorter to facilitate things. I think that last year, we gave 50-60 gigs.

—Is Volkan still living in Barcelona or is the band finally based in Athens? How is the Goth scene there?

—D: I’ve been living in Athens for two years now. Volkan still lives in Barcelona, we use the Internet to work. Athens’s musical scene is great. There are good clubs and festivals. This allows us to see our favourite artists.

—V: We’ve always liked playing in Madrid. We love the city and the alternative scene there is just great. This will be an amazing experience.