One of the things that we love of festivals, it’s the possibility to discover new bands. AstraSonic has been one of the best surprises that we have found in the W-Fest line-up. This year they have been touring intensively all around Belgium and released a new remastered version of their first album, Passengers, that can be heard here.

We talk with Rapha Mantra guitar player and founder member of the Belgian band that will play on Sunday at the W- Fest. 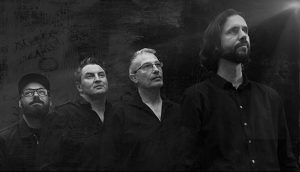 —When and how the band started?

—Seb and I have known each other since 2015, we were in a cover band of The Cure. At the beginning of 2017, we started making some bass and guitar jams and we recorded these first ideas in my home studio. I added drums and keys and we had a dozen instrumental. This was the beginning of AstraSonic in April 2017. We uploaded the compositions on Soundcloud and began to look for a singer, who had to take a test to enter the band. JC passed it singing on our single, “New Angel.” He joined the group in May 2017. The album was released in January 2018. Tim joined us after a few lives as a trio, just a year ago, in August 2018. We realized that for the stage, we needed a drummer because of our rock side.

—At the beginning, you wanted to record a coldwave album. Which bands of the genre influenced you?

—When I started music, my first major influences were Joy Division, Sister of Mercy, Killing Joke, The Cure and Siouxies and the Banshees. In the 1990s, like many other people, I was taken over by the Seattle wave, but I was also a fan of Smashing Pumpkins, Pixies and Tool. Now, I listen to bands like Editors, Interpol and also underground bands as Principe Valiente, Holygram… Seb is mostly a big fan of The Cure. He also likes the Cold Wave of the ’80s, especially Joy Division. In the end, our influences are wide enough, everyone is okay to say that our music sounds like the 80s, but you can’t say that we’re a group of Cold Wave. It’s quite complicated to classify us in a particular style and it suits us well, the idea is to create our own musical signature.

—Later, maybe when your singer joined AstraSonic, the band added some 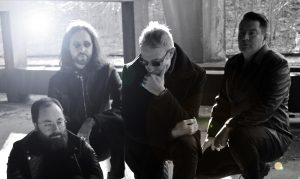 —JC is influenced by singers like Eddie Vedder of Pearl Jam and Bruce Dickinson of Iron Maiden.

—Is it easy for a band like yours to attract young people to your concerts?

—It’s not easy. In southern Belgium, in Wallonia, the media and radio have been gradually focusing their programming on pop singing in French and rap since the late 1990s. Many young people only listen to this, except metalheads. A large part of our fans in our territory is at least 40 years old. Fortunately, there is the rest of the world. In the north of Belgium, in Flanders, it’s very different because they have remained close to the English culture. For the young English people, alternative rock is still present just like in Germany and Italy. With social networks, we can communicate and become known to a wider audience.

—Last year, in January, you auto-released your first album. What can you tell us about the writing and the recording of it?

—For the musical part, Seb and I have composed 8 titles out of the 10. JC created the melody of the voice and the lyrics. ‘Sunset’ is a song that I wrote alone long before the AstraSonic project. JC interprets the voice melody and the lyrics I had written. ‘I will wait’ is a former JC composition. He’s like me, he is also multi-instrumentalist and a composer. I just added the electro parts. The recording itself was a challenge, we had set a deadline: January 2018. It was interesting to boost and concentrate on this objective for 8 months. We recorded the entire first album in a home studio. The instrumental parts were recorded in my house and JC recorded the voices at his place. We also mixed the album, but the mastering was done by a professional sound engineer. 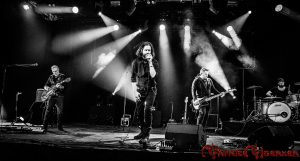 —Who’s writing the lyrics of the album?

—JC wrote the lyrics, except for ‘Sunset.’

—Is it difficult to be an independent band nowadays? How do you promote the band?

—Today we still do not have a label. We are all managing the band, which, of course, is not easy. Seb is the most comfortable at the communication level and knows many people of the underground music scene in Belgium. He spends a lot of his time doing this. We are also fortunate to be surrounded by loyal and motivated fans who also participate in the promotion of the band. For example, we no longer take care of our merchandising live, flyers or Facebook events. One of our fans helped us in the rewriting of the statutes of our association, another wrote our prom text and created the press book. Over the months, we’ve developed our little team. We have, from the beginning with our first single and especially for crowdfunding, developed our social networks to the maximum. As for the media, our album was well received and have very positive reviews. Our songs play on indie radios in Germany, France and Belgium. A pretty important label would be great for us, but at the moment, we are mainly looking for international bookers.

—Who got the idea of the remix of Dragon’s Flight made by Fatherless Child? Any plans of future remixes?

—We are friends with the band Dageist. Nicolas, in addition to his mixes under the pseudo Fatherless Child also works on the electro parts and mixes of the band. Whenever he can play keyboards, he joins Davide and Fred on stage. Seb offered him to remix a title. We are very happy with the result, the voice of JC is even more beautiful. So far, we have no plans of future remixes. We will focus on the second album while continuing to promote the first. But nothing says that we will not be repeating the experiment in the future.

—What happened with the crowdfunding to release your album on CD? At the end you only remastered it?

—This is what we had planned to do with the crowdfunding: the mastering, the conception of the graphic design, the pressing of 300 copies and the making of the T-shirt. Earlier this year, we decided to remix and remasterize the album at our expenses. We had to order new copies because we didn’t have any left. With a year of hindsight, we had become aware of the mix mistakes and we wanted a more modern mastering, which would sound less 80s. Today, the 300 people who bought the first version of the album have a new one that may later become a collector’s item.

—How is your tour going? I saw that you have played in a lot of places in Belgium and also in France. Any plans of visiting the rest of Europe in the future?

—If everything goes according to what we planned, the tour of the second album will take place in spring or summer next year. Our main objective is to make several small tours in several countries, like Germany, Netherlands, England, France, Italy, Spain and Portugal. In fact, everywhere in Europe where we can play at least 2 dates in a row. That’s why we are looking for bookers from these countries so they can help us and we can have good contacts.

—Any funny story that had happened to the band while touring?

—Oh, all the lives are a party for us, we take a lot of pleasure during the show, but also after with our fans and other bands. What really impressed and amused us was the #Belgitude project. One of our fans is a teacher and in her class, she introduced Belgian bands to the children. We participated in the project, her class listened to our album and since the children loved it, she organized a live in the school. There were quite a few people because all the parents were invited. We played with all the children looking at us in the front row. They were staring at us and dancing with their eyes full of stars. And the parents, ten meters away, were just looking at us with interest. For our title “I Will Wait” the children had prepared a choreography. They really had fun with us, because it boosted us. In fact, it boosted us so much that JC, who, before this live, was a bit reserved on stage, got totally unleashed. He even went in the audience to sing. Since then, he’s done that quite often. Thank you kids 😉

—Are we going to have a second album soon? 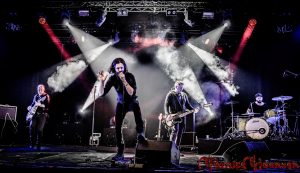 —Next year, if everything goes smoothly. This time, we will pressure ourselves less and we will take the time so everything will be perfect.

—How was your concert opening for Cock Robin? You were supposed to open for Peter Murphy too, right?

—It was great to be the support act for Cock Robin. We received a great welcome from the W-Fest organization. Erik De Ridder, the organizer, gave us a beautiful gift by offering us this support act. The team too, roadies, volunteers, they are all very nice and very qualified! Cock Robin is also very accessible and speaks French very well. It was really cool. With Bauhaus’s live, there was a contractual problem. Bauhaus reorganized their tour and another group linked to the label had to be programmed automatically in support act. Erik De Ridder, the W-Fest organizer did his best to make it possible for us to play but it was a lot of trouble for the Bauhaus team. Their agent refused categorically 2 days before the date. Well, of course, we were disappointed, but we got it right. We are only at the beginning of our story, and our band has already lived a lot of positive experiences since that.

—How is going to be your concert at the W-Fest?

—This is an important live for us and it will remain so. This is a great opportunity to reach a wider audience in Europe. We’re going to give 200% and make it a beautiful memory for all the people present and for our fans.