Algiers were part of a small winter festival organized by the people of Primavera Sound, where some new bands had the possibility of playing their music. They were the winners according to the media and public of the second edition of this event (where piano genius Lubomyr Melnyk also played) and they had the opportunity of playing at the big “spring” festival. Since then, they have released three incredible albums and forged a well-deserved reputation. We have talked with Lee Tesche to know a bit more about this groundbreaking band. They will be playing tomorrow at the Belgian Festival Sinner’s Day Summer that will take place in the city of Ostend. 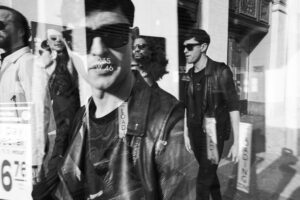 —Although you are not living in Atlanta anymore, the band has been linked to the city as it was your hometown. How do you remember growing up there? Some of you said that there was no scene and only after you left, some bands like Deerhunter became famous.

—Lee: I spent the most time there over the years. More than the others, who left quickly after school. I was very active in the music scene, with both Ryan and Franklin and then continuing on after they left. There has always been a pretty incredible music scene in Atlanta. I think our criticisms might have been directed at the punk and diy scene during our early years, which felt very exclusive and insular. Our band at the time was pretty weird and you kind of had to fit a certain mold in order to be accepted or get shows. That created a ton of outcast bands and musicians and most of those people went on to do bigger things like the aforementioned Deerhunter. The hip hop scene was vibrant at this time though, like world class ground breaking. There just wasn’t a lot of cross pollination between the two. There is a lot more now. A lot of people doing interesting things.

—Having a name like Algiers, have you seen the movie The Battle of Algiers? How did the story of the fight of Algiers come in your lives?

—Yes! One of our favourite films. Ryan studies history and was the person who turned us on to a lot of these things. He had the concept and the name for the band from the beginning.

—Ryan and you, Lee were in a band in Atlanta before leaving. Can you please tell us more about this band, The Partisan, right? Franklin, you were a fan of them, right?

—Yes, it was a band that had been going for a number of years. There were a lot of people in that band. We were influenced by Ornette Coleman’s Double Quartet and this Dischord band Black Eyes. We tried to do two rhythm sections in a punk rock context. Sometimes it worked! It was definitely an influence on how all of us approached this band. Franklin always came out to the shows and was a big fan. When that band ended, the three of us decided to play together.

—You said you got interested in SST and Dischord. I can see some influences of Minutemen in the way of combining music genres and of the Washington label of the importance of the message. Do you agree on this? 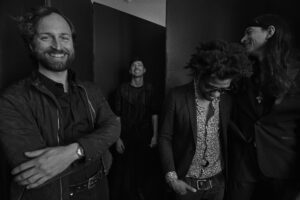 —Yeah, that’s a good comparison. I grew up obsessed with the DC music scene and Dischord and am so happy that connected with me at such an impressionable time. It’s definitely fed into how I perceive operating within the music industry and culture and just how you present your art on your own terms. It’s been so important.

—I would like to ask you about two bands, the first is Throbbing Gristle, whom you have named as an influence, the second ONO, that mixed gospel with industrial music. How have they influenced the sound of Algiers?

—Both have been big influences sonically, but ONO we’ve become friends with over the years and all of them are such great people. Travis and P Michael are just incredible human beings that make really ground breaking art at a later stage in life. Super inspiring. Both good cooks too.

—The first single of the band, “Blood”, was released in 2012, but the full album did not appear until 2015. How were these years in between?

—They were mostly filled with other things. The 3 of us were all working full time office jobs and could really only engage with working on music when we had free time. Things just took longer. We signed with Matador at the end of 2013/beginning of 2014, so that period between then and the Blood release, we were just writing songs. I think we had about 5 or 6 songs that we’d been working on. A couple of them didn’t show up until The Underside of Power.

—The band has removed all the religious aspect of gospel and turn it into a way of expressing your politics ideas. Although it’s true that politics and religion are sometimes too close. Do you think that using a way of expression like gospel can make the message easier to digest?

—No, none of that is conscious. We all grew up on all sort of different music, but the bedrock of all Rock n Roll and R&B is gospel and blues and work songs and things like that. So it is something that I hear in a lot of other groups and communal music. You could make the argument that punk and hardcore share a lot of the same concepts of community and liberation. 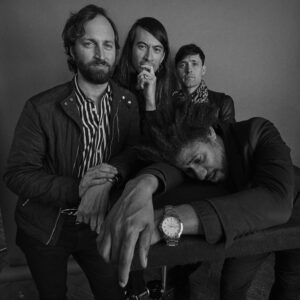 —The band has moved into electronic music territories in tracks like “Irony. Utility. Pretext.” or “Walk like a Panther” and you have used tape manipulation and confessed to having musique concrete influences. How did you get into this kind of music and what did you find interesting in it?

—The root of these songs is hip-hop. That’s kind of what it all goes back to. The earliest experimental music that we were listening to was hip-hop! It’s an extension of musique concrete and tape music. Sampling and cut ups, found sounds, all used to create songs, tell a story. It’s still at the forefront of the most experimental and groundbreaking production in the studio.

—On the Mute Sessions EP, instead, the band removed all the electronic parts. What did you want to achieve? Just try to see how were the songs “naked”?

—We had actually put together a set for NPR’s Tiny Desk Concert series that never aired. It was on our first tour in the US and had been scheduled the morning after maybe our 2nd or 3rd show. We weren’t used to playing every night at that point so we were already exhausted and didn’t have a chance to rehearse what we were doing and spent about half an hour in the lobby of the building planning it out with the instruments they had in the office supplemented with a couple of things from our van. The performance that morning wasn’t great as Franklin’s voice was still shot from the night before. But the ideas we had in the moment were really cool, so we took time out of our schedule a couple of months later to document it in the studio.

—I guess that the two most important tours (at least in terms of visibility) where with Interpol and Depeche Mode. How did you feel playing in stadiums? How did the public react to your music?

—Those shows were wonderful. The Depeche shows. The Interpol ones were too, but that was our first tour and we were still learning what to do, so it was something else entirely. We didn’t have a record out at that point. It was a great learning experience, but I remember being kind of nervous. The Depeche tour was fun because we were playing really well at that time, so we were confident. The stadium stages were oddly sterile, so that took some getting used to. Playing to the smaller club show crowds on our days off was a lot more intimate and more intense. But the band and crew treated us so well. I can’t say enough good things about it. We were all very sad to hear about the passing of Andy Fletcher the other week. He and his family were very kind to us during that run.

—In 2016, there was the tour with the Burn To Shine Film series dedicated to Atlanta. How was the experience? Lee, you were the curator, right? Was it difficult to find a house that was going to be demolished? 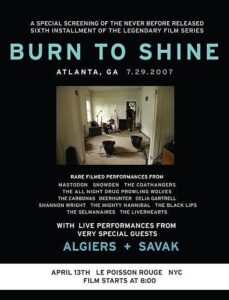 —This was all a surreal experience and touches upon some of the things that you previous mentioned. I got to work with one of my heroes growing up, Brendan Canty of Fugazi. I spoke before how influential Dischord and DC was on me and a huge party of that was the music and politics of Fugazi. It was also an opportunity to shine a light on all of the great bands that were around at that particular point in time in Atlanta that were just beginning to get recognized. And yes, it took a long time to find the house. The project was delayed for 7 years because after we found the house, the housing market collapsed and the demolition was put off for a long time.

—And we would like to ask you also about Nun Gun, a side project of Ryan, you and visual artist Brad Feuerhelm. What is your method of working, do you do first the music and after the visuals? Or is it the other way around?

—That project is all conceptual and we had the concept first and then Brad edited the images. So we had a whole narrative to build around before we started making the sounds and the music. Then it all became working within the process that we had defined, which was sampling parts of the films and soundtracks and slowing them down similar to Houston and DJ Screw’s linage. Those soundtracks are fantastic but the films problematic, so it was a clever way to play with those ideas but subvert them.