One month ago, we received an interesting compilation of Chilean post-punk. After our article about Argentinian band Budapest and Uruguayan La Memoria, now it’s the turn to hear some post-punk from Chile. The compilation brings us ten songs from ten bands. Let’s talk a bit about them. 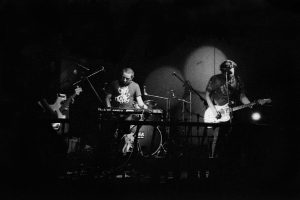 The compilation starts with BrendanJordan, band from Arica created in 2017 that has released two EPs: Sutil Raro published the year the band was born and Vergüenza en la Calle, where the song of the compilation is included: “Ciudad Gótica.” Seatemples, started in 2014 and have one record published, Down Memory Lane, where post-punk mixes with shoegaze and dreampop. As they are good fans of shoegaze, they have included a version of Slowdive’s “Spanish Air” in the tribute album, Just for a life. Parasomnia, from Santiago de Chile, only has one song released, this “Rasguños” that we can find here. We hope that we will be able to hear from them something else very soon, 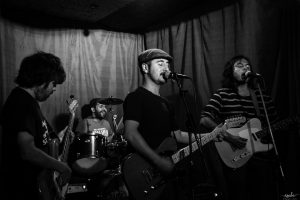 Instead, Intimate Stranger have published a few records in these twelve years that have passed since the creation of the band. They have played as a support act for bands like Interpol or The Raveonettes and even the great Peter Hook. Please, have a look at their album Conversación imaginaria. With very young members and some influences from latin rock, Bicho Raro has released an interesting EP, published in 2018. Eleterios, created in 2014, last year released an EP called Flotar where the song of this compilation, “Droga Legal” is included. Before they had released the album La vida en un Segundo and the Cazar EP.

Sáxaban is a trio, also from Arica. With their last EP, Cannabis Sauvignon from 2019, they have said goodbye to their former ska sounds to embrace more psychedelic influences. Dosis Dionisios, another trio, this time from Santiago, has released two albums Umbral y Sonidos Corrompidos. The following band has a very beautiful name: Nostalgia Eléctrica, and has released an EP in 2018. According to its Facebook page, they labeled themselves as romantic post-punk. The last band of the compilation is Efecto Violeta, a name that for obvious reasons we like. This band has been playing since 2005 and has released a full album: Vicios y Delirios.