The last festival of the year responds to the original name of Setmana Santa and will take place from the fifth to the eleventh of December in the French city of Toulouse. The line-up includes She Past Away, The Cemetary Girlz, NNHMN, Minuit Machine, Years of Denial and Jozef Van Wissem who will play during five consecutive nights (7-11). You can get a pass to see them all for only 50 euros.

The festival had a launch party with Actors playing alongside Brooklyn post-punk outfit Bootblacks. That was on Wednesday 2nd of November as part of the Canadians’ tour, which three days later passed through Madrid.

Moving on to the festival itself, on Monday the fifth there will be a retrospective of the cult French label L’Invitation au Suicide, with a conference with Yann Farcy, head of the label. There will also be an exhibition of the work as a tattoo artist of Sioux Side, singer of Mark of the Sphinx and bassist of The Cemetary Girlz. The music will be provided by DJ Wallie, who already played our favourite music in London in the eighties.
Tuesday the sixth will be the favourite day of the cinephiles because they will be able to see the short film The Runner made by Boy Harsher. In Madrid they had to do several screenings because the tickets sold out quickly, so I recommend you to get your seat as soon as possible. It won’t leave you indifferent. The live music will be provided by the darkwave duo Denuit, who had a lot of success with their first album Black Sun. 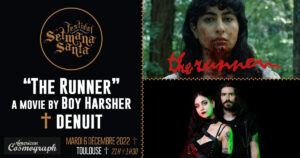 And the main part of the festival starts on Wednesday the 7th with the Turkish band She Past Away and the Polish post-punk band Undertheskin. We discovered the later with his remix of a track by Antipole and his collaboration on Kill Shelter‘s first album. On Thursday we have the gothic/deathrock of The Cemetary Girlz, who will be followed by a DJ set by the singer himself. In case you don’t know them, they are an interesting band who have been creating darkness since 2007.

On Friday we have a very powerful day with Berlin-based NNHMN. It’s a duo we like a lot and we’ve written about them repeatedly in the Garage. We interviewed them, we’ve seen them live twice and we have all their albums, so you can imagine that we are great fans. Along with them, Potochkine is one of the bands we’re most looking forward to seeing. They have released their album Sortilège on Unknown Pleasures Record, a real blast of EBM techno. They also have a remix album featuring many of our favourite artists: La Main, SDH, HIV+, Maman Küsters and Radikal Kuss.

On Saturday another double bill with Minuit Machine, the duo formed by Amandine Stioui and Hélène De Thoury (Hante.) who will be presenting their new album 24 and Years of Denial, another favourite we’ve been trying to see live for some time. We’ll finish dancing to the DJ set by the BOUDOIR MODERNE collective.
On Sunday, we have the most original and surely special line-up. Franck Spicciani, singer of the band Miss Parker, will start the day and, alone at the piano, will delight us with his repertoire of cover versions: from Bon Iver to Nick Cave and also Joy Division. And then there will be Josef Van Wissem, who became quite famous thanks to his 2013 tour with filmmaker Jim Jarmush. Noted for his mastery of the lute, he has an extensive discography in which he has collaborated with people like Gary Lucas or the legendary band Smegma.