Last year, Fakeba and John Fryer were going to present their new project together (he had already collaborated in the producer’s Black Needle Noise) within the DarkMad festival programme. A problem with the Green Card prevented Fryer from leaving the United States and the performance sadly had to be cancelled. A few months later, DarkMad brought the couple for free to present their first album Jotna, both in Madrid and Barcelona. We went to La Boite accompanied by several music journalists from international media who were eager to know how the album sounded. 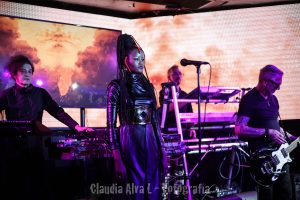 We had the chance to see one of the rehearsals of the band and we knew the songs, but even like this, we were astonished by Fakeba’s incredible stage presence. She is really magnetic and has a really good voice. And on stage she is perfectly accompanied by John Fryer, who with his guitar and effects gives a new dimension to the music. For the concerts, two more members are added: the famous producer Big Toxic and synth wizard Myxluydy, both members of Flash Zero.

As soon as the concert started, we noticed that the four artists were having a good time and Fakeba and John Fryer seemed happy to be on stage. We started to warm up with “Ndanane” which already gave us a 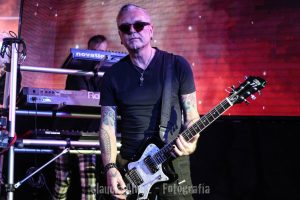 n idea of what we were going to witness that night: great dance tracks where African tradition and the 4AD sound were combined. They continued with the powerful “Donsoba,” perfect for global future clubs and with which both the band and the audience got into a frenzy. Next, we enjoyed “Gueth,” with a dreamy beginning that reminds us of those wonderful albums that Fryer has produced and “Diodable,” much more aggressive in comparison, and where Fakeba sounded more traditionally African than in the rest of the songs in what we must describe as an astounding performance.

They continued with “Rave,” a song that, to be true to its very name, sounded like a real club banger, and it is, without a doubt, a song that could be played on the radio and at the same time be the highlight of any party thanks to the rush effect of the interlude. The concert came to an end with what, for me, is their best song “Mother Africa”: the first rows kept dancing and Fakeba really dominated the stage. What a frontwoman! “Mother Africa” is an anthem for a world that started in Africa and seems to have forgotten about it. We must highlight the incredible visuals that accompanied the performance that contained part of the song’s video. It was time to say goodbye with “DaKaR,” the first single of the album and with a John Fryer’s guitar’s marked protagonism, who together with Fakeba performed a small choreography accompanying the chorus: “Dakar, kill the smog.” I especially liked the curious interlude with African drums. In short, it was a real blessing to be able to attend the these four masters’ concert who managed to make us live an Wedneday afternoon as if it were the greatest party of the year.