Not so many times we had to start a review explaining some exoteric believes: Controversial is Bart Coninckx’s project and he follows the Left Hand Path, the philosophy behind this Second Genesis. Basically, the followers of this path reject social conventions and status quo and question moral and religious dogmas. The album can be enjoyed without knowing all this, but to know it won’t make you any harm. Thirteen tracks, two of them remixes, form this Second Genesis, album that every fan of Ministry and KMFDM will enjoy. And again, not many times we have listened to an album with so many ideas, so enjoyable and with such a bombastic sound. Totally recommended. 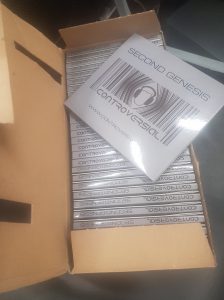 This project started in a faraway 2001 with the name of Pitch Black and it developed as much as the sickness of Bart permitted him to do it. Finally, he managed to self-release this album that now is going to be released by Cleopatra Records, a label that has recently published the new Paranormales’ record. Second Genesis is a real roller coaster made record, a tornado that will surprise you during each second of the album.

Second Genesis starts with “The Trauma of Birth”: crows welcome us at the same time that a soprano starts singing some church music creating a real horror movie atmosphere. The track continues with the strange and successful combination of some powerful guitars and angelic chorus that are added to the mix making the song even more uneasy. From birth, we pass to “Visions of Death”, with a very electronic beginning with videogame-like sounds, more guitars and the same nightmarish atmosphere of the previous song, achieved thanks to some vocal samplers coming from horror movies. “Violence,” instead, is an industrial track full of fun with a beginning that makes us think of spy movies and the same feel of the more playful Ministry’s tracks. Armed with samples of weapon chargers and a message that make us think of the importance of the weapon industry in our society, the track will put a smile on your face but also a frown. The album continues with “Commercial Breakdown”, another powerful track with a very industrial sound.

“Take Command” is an orgy of samples where we could listen to some military orders and tribal chants, everything propelled by a frenetic pace. “Crying” is something completely different compared with everything that we have heard so far: it’s a slow and dramatic track that we could link with the intro of the album. On this occasion, we can also hear Bart singing, and even doing a great guitar solo. After this, “Let the Monster Out”, takes you by surprise because it has a really fast rhythm and an electronic part with sounds that could belong both to a videogame or an acid track. And another great guitar solo. “Suffering Unseen” with the noise of drillers in the background mixes the faster electronic genres with industrial and the vocal part is divided between sampler from horror movies with some parts sang by Bart, finishing with an unexpected country part.

“Liar,” instead, is heavier, industrial and with some powerful guitars that could be enjoyed by any metal fan. “Forge Ahead and Kill” has an electro danceable rhythm that is soon buried under the heavy sound of guitars. “Wolf or Sheep” is again a fast, heavy and industrial track, the three adjectives that we had to repeat more in this review. Some broken crystals are marking the industrial/military rhythm of the funny “Ego Army”: this time, electronic music replaces guitars in the perfect song for the military marches of the 22nd century. And to finish, another slow track: “Is this the best” is full of cries, a hip hop rhythm and gives us the sensation that we have been born more than once.

The album also includes two remixes: with Die Krupps, “Violence” loses its sense of humour but instead becomes heavier. Leæther Strip adds his voice to “Take Command” and make it faster and darker. A great example of the art of remixing.