Wrtchd Thngs, Chmcl Str8jckt’s semophore album is undoubtedly one of our discoveries of the year. Behind this quite strange name without vowels is hidden “Chemical Straightjackets,” a cocktail of medicine given to someone who is out of control, and a band from New Jersey, who made their debut in 2017 with their homonym album. Inspired by the past, their sound mixes perfectly old school metal guitars with industrial music from the Wax Trax! era. And last, but not least, the album is produced by John Bechdel (Ministry). What is not to like?

The first track of the album, “Wrtchd Thngs,” gives us a taste of what is about to follow: the ominous voice of Kevin Snell will, from now on, make us discover the twisted nature of the human being.

“Ode to Peckinpah (Bloody Sam)” begins with powerful percussions accompanied by an EBM rhythm. A clear guitar, whistlings and neighs will make the listener dive into the ambiance of a bloody western of Sam Peckinpah, against a background of energetic industrial rock. “The Only Thing That’s Real” introduces a groovy bass quickly strengthened by powerful guitar riffs. Sometimes, the music adopts an electro-punk feeling, leading you to an infernal rodeo, reinforced by Snell’s driving voices.

The oppressive ambiance of the introduction of “Cut Deep” is quickly replaced by electronic rhythms which take you away in a whirlpool of terror. The suffocating atmosphere turns you into a horror movie protagonist. “Baphomet” wears the name of the mysterious idol which the Templars are accused of worshiping. The introduction is reminiscent of the ambiance of a church, where a ceremony takes place. It’s not long before the track shows all its energy and electronic rhythms. Snell speaks about the arrestation and the massacre of the Templars in 1307, with saturated and warped voices, that strengthen the feeling of horror.

The following track, “Fantasy” is a version of Aldo Nova, but it’s far from the ambiance of the original: from the introduction, some laser firing gives us the impression of being immersed in a sci-fi movie and, of course, Chmcl Str8jckt give their own personal twist to the song, adding heavy guitars and beautiful electronic rhythms. “Cactus” constructs itself slowly. The guitar is accompanied by synth chords that intensify the feeling of oppression. “Love” begins like a ballad, but still keeps its industrial feeling. The notes played on clear guitars are quickly backed by synths that sometimes seem to be filling all the space. The lyrics recall the title of the album, “We men are wretched things” that Snell declaims several times until the end of the tune.

New change of atmosphere with “Bomb Cyclone,” which is a very intense electronic tune. A music box melody begins “Black Vulture”. When it ends, heavy guitar riffs, saturated voices and struck organ chords teleport us in a movie, whose ambiance recalls Phantom of the Opera. Suddenly, there is a change of rhythm and the tune becomes metal and gives the sensation of a pursuit where Death is at our heels. The song then ends on a grim piano and organ melody. “Meat Hook”, whose frenetic pace express madness and insanity, concludes the album. 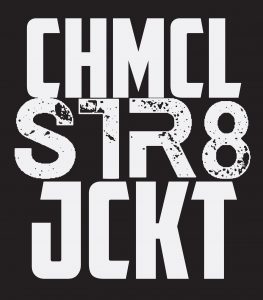 Chmcl Str8jckt have chosen their name well: they truly are an explosive cocktail that won’t stop surprising us. Wrtchd Thngs is a pleasure for the ears and a renewal of the Wax Trax! era. Maybe one day, in Europe, we will have the chance to attend  one of their energetic concerts, where they mix dark imagery and theatrics to underscore the shocking themes of their tunes.