Every new release from Philippe Laurent is welcomed at El Garaje, and on this occasion we have two!!!! The French musician, also known as Hot-Bip published last year a new improvised track when some of us were still getting the Christmas turkey ready. And with the new year, he told us that a new track, called “Dracontopode” was going to appear in the extensive compilation Serendip Lab 10 ans, where all the artists that have played in that festival contributed with a song to kind of celebrate the 10th anniversary edition that due to the Cod-19 situation could not happen. 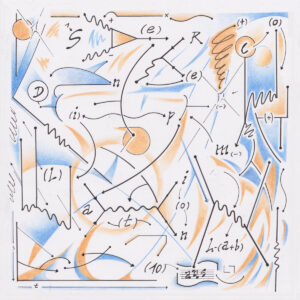 Sometimes, not as often as I would like, wishes come true, and this has been one of those times, because when I reviewed “Improvisation 01”, I asked eagerly for a second part. And, luckily, here it is, a new improvisation track, more than 30 minutes long, so, I can’t be happier. If in the previous song, the guitar had an important part, this is the time for an electro-acoustic bass and quite a lot of pedals: StompLab IB Vox, SE-50 Boss, A3 Korg, SX-700 Boss, Element XP Digitech, G1 XFour Zoom and a DD 500 Boss x 2 creating a more psychic track. “Improvisation 01,” starts with a very funky bass that it’s soon joined by a beautiful synth melody. Little by little, “Improvisation 01” is slowing down, as some industrial sounds appear, making the second part of the track way more dark and apocalyptic, reminding me of the latest works by Ben Frost or Roly Porter. Can I already ask for a third part?

In the compilation Serendip Lab 10 ans, together with Philippe Laurent we can find eighty-nine more artists, among them Pierre Bastien and Henriette Coulouvrat. “Dracontopode,” with a duration close to 10 minutes, is another masterpiece to add to the career of the French musician. We can notice that Philippe is having a good time playing his guitar as we can see during the first minutes of the track, which starts with a very rock riff, and quite a fast rhythm. It doesn’t take too long before synths take their deserved prominence, with an outstanding work in the middle of the song. Just at the end, the guitar is back, coming to and end that it’s quite similar to the beginning.